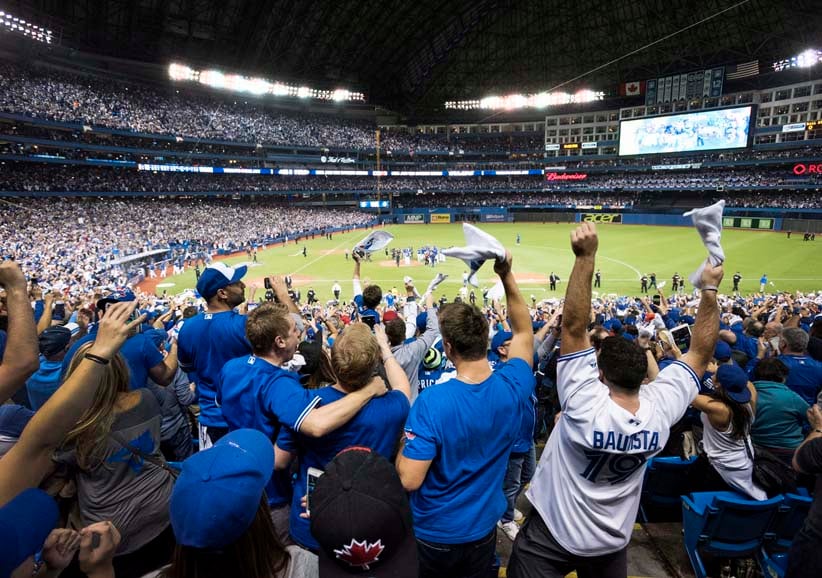 TORONTO – Baseball fans, Toronto residents and the city’s mayor are expressing their disgust after someone hurled a beer can at a Baltimore outfielder during Tuesday’s dramatic playoff game between the Blue Jays and the Orioles.

The incident – which triggered a frenzy online and in the stands – saw the can narrowly miss Orioles outfielder Hyun Soo Kim as he made a catch during the seventh inning.

In the confusion that followed, another Orioles player said he was taunted with racial slurs.

The entire episode was swiftly condemned on multiple fronts.

Toronto Mayor John Tory called the culprit a “loon-ball,” but noted that the person was just one among about 50,000 fans at the game played at the Rogers Centre.

“I hope that the people sitting around that guy…point him out to somebody and just make sure he doesn’t attend anymore baseball games, and maybe he should get help,” Tory told local radio station NewsTalk1010 on Wednesday. “I don’t know where they find these people.”

A number of baseball fans also took to Twitter to express their outrage, and distance themselves from what many called “inexcusable” behaviour.

“Go Jays!!! I hope the moron who threw the beer can is enjoying being the most pathetic person in Canada today,” tweeted one person.

“Tossing beer cans and yelling racial slurs is abhorrent in any instance. The vast majority of Jays/sports fans/Canadians aren’t like that,” tweeted another.

Some also suggested the root of the problem was irresponsible drinking at the wild-card game, which Toronto won 5-2 to advance to the American League Division Series against Texas.

“Do something about the alcohol in the stadiums,” tweeted one man.“The drinks ruin the fun for everyone.”

While the identity of the person who threw the can remains unknown, Toronto police said they were investigating the toss by the “unsportsmanlike fan” and urged the person to turn themselves in.

“We have clear images of the person responsible,” said Const. Jenifferjit Sidhu. “We take this matter very seriously and will continue to investigate until the person is apprehended.”

Blue Jays spokesman Erik Grosman said the person who threw the beer can was not ejected from the stadium because he took off before police had a chance to arrest him.

Orioles manager Buck Showalter said it was fortunate no one was hurt in the incident.

“It’s tough when you have many people in the ballpark and one person does something that reflects poorly on all of them,” he said.

Kim, the target of the toss, said such an incident should never happen.

“It’s the first time for me and hopefully the last,” he said through an interpreter.

Centre-fielder Adam Jones, who said he heard racial slurs after the can was thrown, called the incident “pathetic.”

“You don’t do that. Yell, cuss or scream,” Jones said. “To put us in harm’s way, when all we’re doing is focusing on the game, that’s not part of baseball. Not part of any sport.”

It’s not the first time, however, that rowdy behaviour from some Jays fans has caused a stir.

Blue Jays fans tossed bottles and debris on the field during Game 5 of last year’s AL Division Series against the Rangers, upset by the call that let Rougned Odor score from third after catcher Russell Martin’s throw back to the mound deflected off Shin Soo Choo’s bat. A baby was narrowly missed.

Following that episode, a decision was made to serve beer in plastic cups in the upper tier of the stadium for certain games.

A Blue Jays fan also threw a drink at Orioles outfielder Nate McLouth during a game at Rogers Centre in May 2013.