After complaining about ongoing rights abuses, Timothy Nome says authorities organized an attack on him by white supremacists 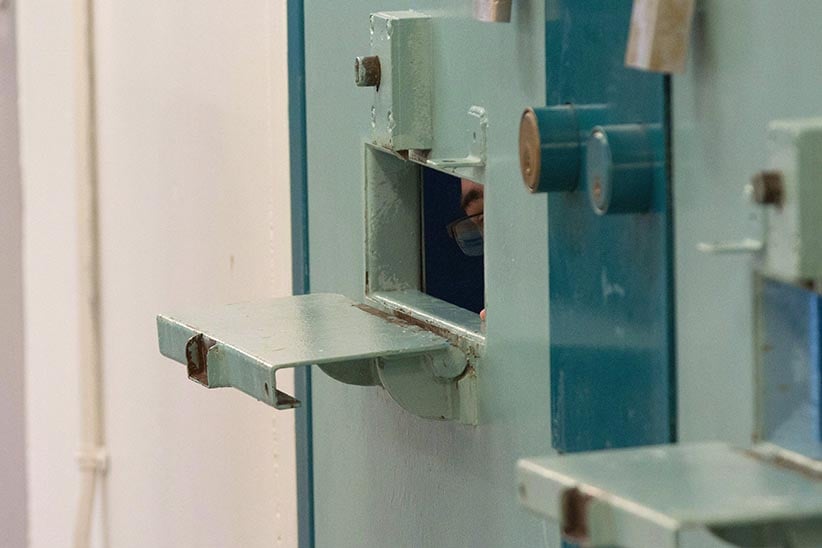 An inmate can be seen inside a segregation cell at the Collins Bay Institution in Kingston, Ont., on Tuesday, May 10, 2016. The media were invited to tour the facility. (Lars Hagberg/CP)

TORONTO — A Jewish aboriginal prisoner who was assaulted by other inmates alleges the authorities set up the white supremacist attack in retaliation for his complaints about treatment he says has violated his constitutional rights.

Timothy Nome, 42, who is serving an indeterminate sentence for punching a guard years ago, also claims correctional officers at the prison in British Columbia deliberately poured pig lard onto his kosher food and that authorities are denying him access to the courts.

The contested allegations are the latest in a protracted battle between the maximum-security inmate, who has spent a total of more than 12 years in segregation during stints at numerous institutions around the country, and prison authorities, who appear to be at a loss about how to deal with him.

The Canadian Civil Liberties Association wrote Bobbi Sandhu, the warden of Kent Institution in Agassiz, B.C., to express its concerns about Nome’s most recent prolonged stretch in segregation — 130 days — and his “abhorrent treatment” by prison staff.

In the December letter, obtained by The Canadian Press, the association calls on Sandhu to investigate Nome’s claim that he has been unable to take several grievances to court because authorities wouldn’t allow him paper, a printer, or access to the prison law library.

“These are matters of utmost importance,” the CCLA letter states.

The association said it had not had any response to its letter. Despite repeated requests from The Canadian Press, Correctional Service Canada did not respond to Nome’s assertion that it was violating his constitutional rights by denying him access to the courts.

Nome was on a rare stint out of segregation at Kent Institution hoping to be reclassified as medium security when he was attacked last month. He blames white supremacists sporting visible Nazi tattoos — and says authorities were aware the newcomers to his range would be “incompatibles.”

“They knew this and they flooded the range with these guys,” Nome said in a recent interview. “It’s foreseeable that me, being an Orthodox Jew, is going to get into trouble with that.”

Prison authorities deny the allegations. Instead, they blame Nome for failing to report his concerns — something he says he did in writing months ago.

Jean-Paul Lorieau, a regional spokesman for Correctional Service Canada, said Nome had no listed incompatibles on the unit at the time of the assault, which left him with a scald wound on his neck.

“Inmates are free to identify any incompatibles they may feel are present at any time during their sentence,” Lorieau said. “Staff were unaware of any safety concerns in regards to Mr. Nome prior to the assault.”

Nome maintained that one manager had taken photographs of a large swastika on the wall of a cell he was moved into, but authorities denied knowing the inmate was the target of racist or anti-Semitic behaviour in his living unit.

Lorieau said Nome was treated for his injuries and, for his own safety, put back in solitary confinement.

Vibert Jack, an advocate with Prisoners Legal Services based in Burnaby, B.C., said Nome has spent an “unreasonable time” in isolation.

“It’s obviously a rare case but it is something that we see: The institutions don’t really have any solution for (such inmates) other than segregation, and Mr. Nome is an extreme example of that.”

Jack, who visited Nome at Kent after the assault, said it appears guards knowingly put him in harm’s way. Jack said another Jewish inmate reported correctional officers blocked a request to be housed with Nome, citing the threat from white supremacists in the range.

Nome maintains that guards have been retaliating against him for raising legitimate concerns — such as freezing conditions on the range — and have covered up evidence that supports his complaints — something correctional authorities deny.

Born to an Orthodox Jewish mother and Cree father, Nome is originally from Williams Lake, B.C. He has, however, been mostly in custody since he was 13 years old.

Authorities took him from his young alcohol- and drug-abusing mother when he was just four. Placed in various foster homes, where he says he was emotionally and sexually abused, he and his three younger siblings were finally adopted as a family by the Nomes — described in court documents as dysfunctional. His adoptive mother beat him badly, he said.

Court records show the family broke apart when Nome was 11, and he ended up in various group homes. He became a drug abuser, was often suicidal, and got into constant trouble. As an adult, Nome has been outside prison for a mere nine months, during which time he threatened and sexually assaulted a 14-year-old girl by groping her, according to the conviction.

In all, he has racked up an impressive number of convictions — ranging from threatening death and sexual assault, to assault with a weapon, breaching probation and vandalism. However, the vast majority — more than 100 of them — stem from incidents that occurred behind bars.

“I’m not a perfect guy and I’ve retaliated on a few occasions,” Nome says. “But it’s a very very large part in retaliation or reaction to what the guards are doing to me.”

His current incarceration stems from an assault in August 2005: He punched a guard who was trying to force him into different clothes. It cost the inmate two teeth and a black eye.

At sentencing in 2009, forensic reports branded Nome a psychopath with anti-social personality disorder. One assessment, however, said Nome’s risk of reoffending was highest in a maximum security environment, and that any risk he posed could be managed with treatment in the community.

“When Mr. Nome is triggered by feeling disrespected or unfairly treated, he engages in a power struggle, becoming inflexible, and this results in self-sabotaging threats and intimidation,” Gunn wrote in her sentencing decision. “The consequence for Mr. Nome is he has further loss of control than what he had started with.”

Nevertheless, Gunn decided there was no reasonable possibility of controlling him outside prison, declared him a dangerous offender, and gave him the indeterminate sentence he is now serving.

Nome’s supporters, however, say his behaviour is much improved in recent years and that he poses no threat to others when treated properly.

Steve Fineberg, a lawyer in Montreal who jokingly describes Nome as “more of an industry than a client” given the many people who have taken up his cause, said the inmate has been at war with prison authorities from the get-go, but had been trying to do his time peacefully when the latest series of incidents erupted.

Nome is resourceful, persistent and unwilling to back down, Fineberg said, and some guards hate him for it and have taken that out on him.

“He insists on his rights and he does it energetically and joyfully and it drives Correctional Service crazy,” Fineberg said. “Segregation is one of their responses. He’s really driving them mad. He won’t stand down.”