"The trust that previously existed between these two individuals and our team has been broken,'' Trudeau told caucus members. 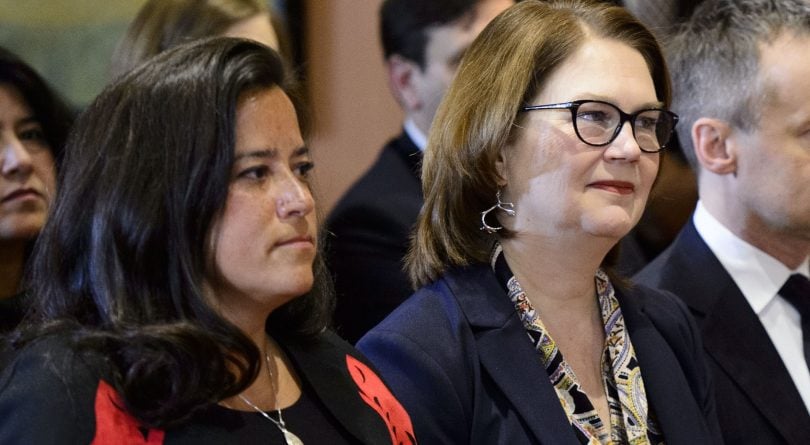 OTTAWA — Jody Wilson-Raybould and Jane Philpott have both been kicked out of the Liberal caucus, Prime Minister Justin Trudeau said Tuesday, moments after their fellow government MPs had gathered on Parliament Hill for an emergency meeting to determine their future with the party.

Wilson-Raybould, whose explosive allegations of political interference by the Prime Minister’s Office appear to have deeply imperilled Liberal hopes of holding on to power in this fall’s federal election, wrote to her fellow — now former — caucus members earlier in the day in hopes of convincing them to let her stay.

But just minutes into Tuesday’s hastily convened meeting, Wilson-Raybould, who stepped down from Trudeau’s cabinet in February after he shuffled her out of the coveted justice portfolio, made it clear via Twitter that the letter hadn’t worked.

“I have just been informed by the prime minister of Canada that I am removed from the Liberal caucus and as the confirmed Vancouver Granville candidate for the Liberal Party of Canada in the 2019 federal election,” she tweeted.

Minutes later, reporters and cameras were ushered into the caucus room to listen to Trudeau announce that both Wilson-Raybould and Philpott were gone.

“The trust that previously existed between these two individuals and our team has been broken,” Trudeau told caucus members.

“It’s become clear that Ms. Wilson-Raybould and Dr. Philpott can no longer be part of our Liberal team.”

It’s the latest dramatic twist in the turmoil that has roiled the top ranks of the Trudeau government for weeks, fuelled by allegations that Wilson-Raybould was improperly pressured by the Prime Minister’s Office to intervene in the criminal prosecution of Montreal-based engineering firm SNC-Lavalin.

And it comes on the heels of a fresh uproar over a key phone conversation between the ex-minister and former Privy Council clerk Michael Wernick, the country’s top bureaucrat — a conversation Wilson-Raybould secretly recorded.

That recording was released Friday as part of her evidence of what Wilson-Raybould calls an intense pressure campaign to persuade her to override a decision to deny SNC-Lavalin a remediation agreement, which would allow the engineering giant to avoid criminal proceedings on corruption and fraud charges.

READ: On the elimination of inconvenient Liberals

In the weeks following Wilson-Raybould’s resignation, caucus had grown divided over the question of whether she and Philpott should be allowed to remain in caucus. Trudeau himself had initially suggested he would be willing to let them stay.

But Friday’s release of Wilson-Raybould’s 17-minute phone conversation with Wernick —and the fact she recorded it—appeared to tip the scales.

“We’ve taken every effort to address their concerns, and ultimately, if they can’t honestly say that they have confidence in this team … then they cannot be part of this team,” Trudeau said.

“I know many of you are angry, hurt, and frustrated. And frankly so am I, and I can only speak for myself,” Wilson-Raybould wrote in her letter to caucus members.

“I am angry, hurt, and frustrated because I feel and believe I was upholding the values that we all committed to. In giving the advice I did, and taking the steps I did, I was trying to help protect the prime minister and the government from a horrible mess.

Toronto MP John McKay, who was unmoved by Wilson-Raybould’s letter, said he’s dismayed by her behaviour and believes she and Philpott are “joined at the hip.” Fellow MP Judy Sgro agreed the letter is “too little, too late.

Infrastructure Minister Francois-Philippe Champagne criticized Wilson-Raybould’s ethics, saying he had never recorded any conversations he had while working as a lawyer. Tourism Minister Melanie Joly called it “fundamentally wrong.”

READ: Jody Wilson-Raybould: ‘I am issuing the strongest warning I can possibly issue’

In the call, Wernick repeatedly asks Wilson-Raybould why she was not using all the tools at her disposal on the SNC-Lavalin case. She pushes back, saying she would not override the decision of the director of public prosecutions to pursue a criminal prosecution against SNC-Lavalin for bribery and fraud related to its activities in Libya.

Wernick told her Trudeau was “quite determined” on the matter and would likely “find a way to get it done one way or another.”

In a written submission that accompanied the audio, Wilson-Raybould acknowledged recording the conversation was an “extraordinary and otherwise inappropriate step,” but said she felt it necessary to have an exact record of what was discussed.

Wilson-Raybould has said she believes she was moved out of Justice to Veterans Affairs as punishment for refusing to succumb to relentless pressure last fall from Trudeau, his senior staff, Wernick and others to intervene on SNC’s behalf. She resigned from cabinet a month later.

Philpott followed suit in early March, citing a loss in confidence in the government’s handling of the matter.