Oland, 51, a former financial adviser was charged with second degree murder in 2013 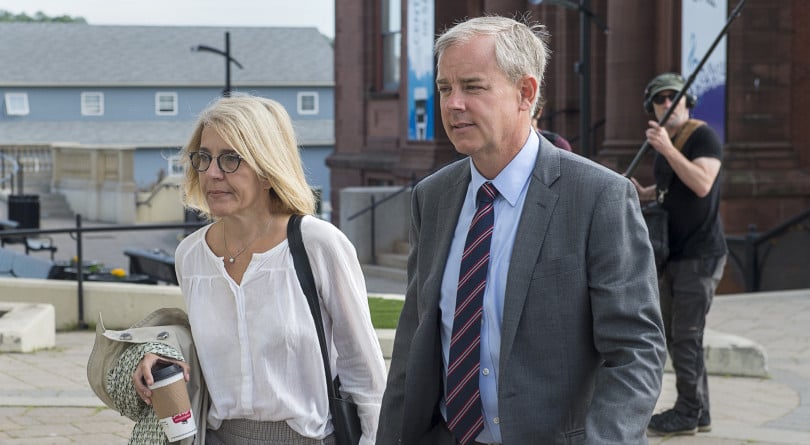 SAINT JOHN, N.B.—Dennis Oland has been found not guilty of second-degree murder in the 2011 bludgeoning death of his multi-millionaire father, Richard.

Justice Terrence Morrison of the New Brunswick Court of Queen’s Bench delivered his decision Friday to a packed courtroom in Saint John, N.B.

Morrison said there were too many missing pieces of the puzzle to prove guilt beyond a reasonable doubt. “More than suspicion is needed to convict a person of murder,” he said.

Dennis Oland, 51, a former financial adviser who was charged with second degree murder in 2013, hugged his defence team after the verdict was read.

READ: How Dennis Oland got a retrial for second-degree murder

His reaction was in stark contrast to his response after his first trial in 2015 when a jury found him guilty of second degree murder. At that time, he collapsed in the courtroom and sobbed uncontrollably into the robes of one of his defence lawyers.

That jury verdict was overturned on appeal and a second trial was held, this time before judge alone.

Members of the Oland family who have stood by Dennis throughout the almost decade-long ordeal cried tears of joy in the courtroom. The New Brunswick branch of the Maritime beer-brewing clan is one of the wealthiest families in the province.

The family-owned business, Moosehead Breweries, is based in Saint John, and Richard Oland was a former vice-president until he lost out in a succession dispute and left to run his own enterprises.

It was in one of those companies, the investment firm Far End Corp., that the 69-year-old was bludgeoned to death sometime during the night of July 6, 2011. His body was found by his assistant the next morning. He had been beaten to death with a weapon that was never found.

From the start, Dennis Oland insisted he had nothing to do with his father’s death. But he was the one and only suspect for the Saint John Police Department from the day the body was found.

He is the last known person to have seen his father alive. The trial heard he went up and down to his father’s office three times in the space of about an hour on July 6, 2011, between 5:30 and 6:30 p.m. He said his father was fine when he left him after a pleasant chat about the genealogy of the Oland family.

The police and prosecution theory was that during his third and final visit to the office, Oland used something like a drywall hammer with both a sharp edge and a blunt end to beat his father to death, striking 45 blows, mostly to the head.

“Absolutely ridiculous,” Oland said when prosecutors accused him on the stand in March. “I’m not that kind of monster.”

The prosecution theory of the crime was that Oland attacked his father in a rage following an argument over money. Dennis Oland was deeply in debt; Richard Oland had amassed a fortune worth an estimated $36 million and was living the high life, racing yachts and travelling with his mistress.

The defence team, led by Toronto lawyer Alan Gold, downplayed the importance of money. Oland himself told the court that while things were a bit tight—he was overspending by roughly $14,000 per month and his credit cards and lines of credit were maxxed out—he could always borrow more money when he needed it.

Both Oland trials spanned several months. The second trial also was supposed to be a jury trial, but the discovery that a Saint John police officer who was helping the prosecution with jury selection used a database that was not permitted led to a mistrial, the dismissal of selected jurors and the decision to proceed before judge alone.

The conduct of the Saint John Police Department was central to the defence strategy in both trials. Without a jury in the second trial, defence lawyers had tough questions for police officers who took the stand and often admitted to not being as careful as they should have been in protecting the crime scene.

Defence lawyer Mike Lacy said so many officers, both senior and junior, visited the bloody scene, it was like “a tourist attraction.”

Gold also raised the issue of “confirmation bias” or tunnel vision in the police investigation. He argued that Saint John police decided early that Oland was the killer and they discounted any evidence that may have pointed in another direction.

Oland did not comment as he left the courthouse Friday. Supporters applauded as he was led to a waiting car.

—With files from Kevin Bissett