Shannon Proudfoot: 'It seems certain that at least some of the Liberal slide has been the direct result of an electorate surly about being pressed into service when the pandemic has not remotely moved into the rearview mirror.' 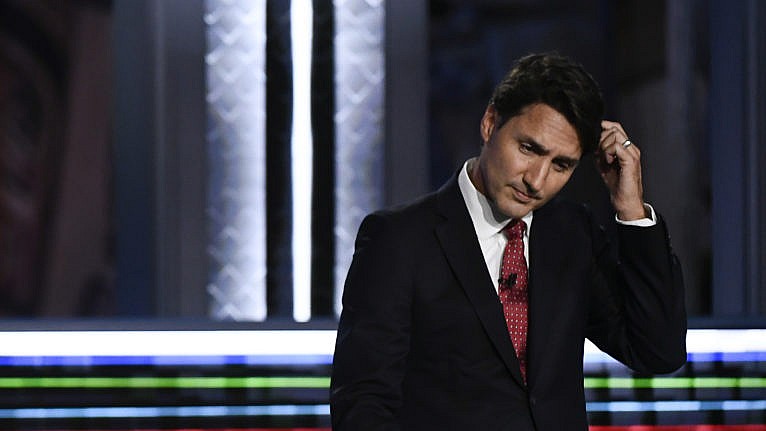 Every side always claims their guy won the debate, of course, but the fact that Liberal Twitter was frothing over the purportedly impertinent and nasty questions in Thursday night’s English-language leaders’ debate is a decent indication that things didn’t go so well for the red team.

Early on, moderator Shachi Kurl teed up a one-on-one debate segment between Green Party Leader Annamie Paul and Liberal Leader Justin Trudeau with a question about how he calls himself a feminist and yet on his watch, sexual misconduct in the military has “run rampant.”
“I have said before and I’ll say again tonight that I do not believe that Mr. Trudeau is a real feminist,” Paul said, almost offhanded in her diagnosis. Someone who was a feminist wouldn’t have pushed strong women out of his party, she said, listing off Jody Wilson-Raybauld,  Jane Philpott and Celina Caesar-Chavannes as unfortunate examples. If there had been more women on a platform like that national leaders’ debate stage at the Canadian Museum of History, we would have better policies governing a host of issues, Paul argued, but she and Elizabeth May are the only ones to have landed there in almost two decades. Trudeau, evidently, did not like this line of reasoning. “I think Ms. Paul, you’ll understand that I won’t take lessons on caucus management from you,” he sneered.

READ: Five takeaways from the federal election debate, a disjointed but feisty showdown

The tone and content of the remark—referencing the Green Party’s attempts at very public acts of political cannibalism over the last several months—was so sharp and petulant that it reverberated like a slap, suggesting Trudeau already felt besieged 10 minutes into the two-hour event. It was not the only time he appeared rattled and on his back foot, goaded into a sucker punch rather than delivering a tidy hook. The greater energy he’s displayed over the last week, as his campaign finally seemed to get its shoes on, was turned up too high and of the wrong kind to be useful to him on Thursday.

Of course, as the incumbent he went in with more baggage and more soft underbelly exposed than the other party leaders. But the very first question he had faced—amid a barrage of similarly pointed questions to each of the leaders in succession—centred on the core question hovering over the entire proceedings: why are any of us here right now?

“Mr. Trudeau, because you wanted a new mandate, you plunged the country into an election even as the pandemic spurs thousands of new cases. But over the last 18 months, opposition parties have largely stood with you, putting the nation above politics,” Kurl said. “Why aren’t you doing the same? How can you justify an election at this time?”

Trudeau nodded and blinked slowly and sagely, but then offered up a slightly garbled amalgam of the same thin-gruel answer he’d been giving since he emerged from Rideau Hall on August 15 after dissolving Parliament and launching the campaign. We have important choices to make about how we emerge from the pandemic, he said, and this debate would highlight the very different ideas—he reiterated that some of these ideas would be “radically different,” though he restrained himself from pointing at Conservative Leader Erin O’Toole and mouthing “IT’S HIM” as he did so—about how to do so. “Those decisions are going to be taken by your government now, in the coming weeks, this fall,” Trudeau said. “Not a year from now, not two years from now.”

Kurl, speaking on behalf of a depleted and distracted nation, asked plaintively, “Could it not have waited a few months?”

And here is the crux of it. Trudeau, his advisors and his party apparently launched the country into an election because the going looked good to seek a majority, based on months of polls that showed a significant and enduring lead for them. That lead began to shrink the moment the writs were issued in a skid that only recently appears—maybe—to have bottomed out. And while Trudeau’s former principal secretary and close advisor Gerald Butts has suggested the lead was always an illusion borne of pandemic goodwill, it also seems certain that at least some of the slide has been the direct result of an electorate surly about being pressed into service when the pandemic has not remotely moved into the rearview mirror.

The lack of a plausible or compelling reason—beyond political opportunism—for holding an election right now has evidently been a problem for voters. Next, it could be a problem for Justin Trudeau.