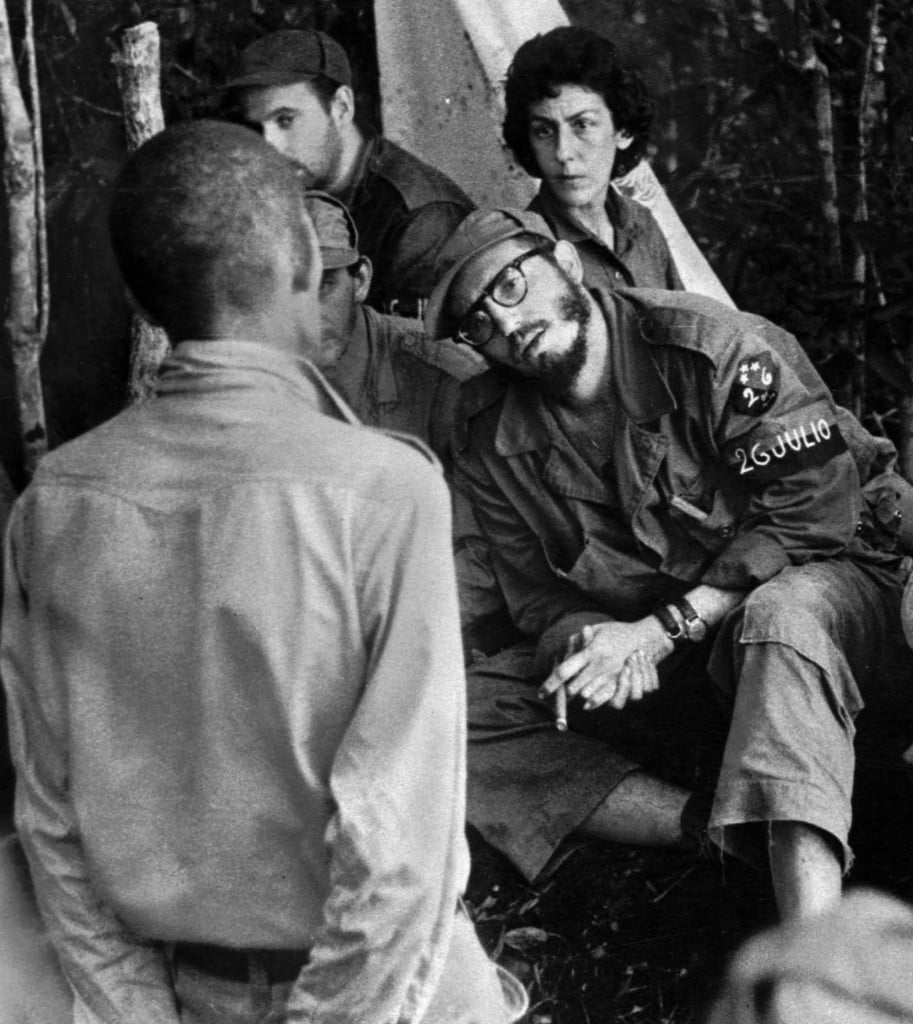 In this 1958 file photo, Fidel Castro, centre, questions a man charged with banditry as Celia Sanchez looks on during a trial held in the guerrillas’ base in the Cuban mountain range of Sierra Maestra. (AP Photo/Andrew St. George, File)

Many Canadians, like the Trudeaus, have fond memories of their trips to Cuba. Balmy winds and a warm reception can colour your perception of a place. The spectacle of a U.S. neighbour so thoroughly walled off from Uncle Sam’s influence is undeniably novel.

But no amount of rum or Pablo Milanés can erase the crimes and abuses that have kept Cuba an anomaly for so long, and one hopes this is where most Canadians break with their Prime Minister. Social media was aflame on Saturday over Justin Trudeau’s tribute to Fidel Castro on the occasion of the Communist dictator’s death. And rightly so.

According to the statement from the PMO, Castro “was a larger than life leader who served his people for almost half a century. A legendary revolutionary and orator, Mr. Castro made significant improvements to the education and health care of his island nation.”

Improvements there might have been, but this is an egregious white-washing of the man’s legacy. Castro did not serve his people; he served an ideology, and like so many tyrants, he equated the two without regard for the consequences. The task of putting that ideology into practice, and of preserving himself in power, was his excuse to repudiate the freedoms that we dupes in democracies hold dear: of conscience, expression, mobility and association.

These are ideals the Prime Minister is pleased to invoke when it suits him. Yet to read today’s statement, you’d think they’re worth sacrificing for better schools and universal health care. Or that they couldn’t have taken place under a different form of government.

You’d certainly never imagine the horrors perpetrated in the name of Castro’s regime: arbitrary arrests, extrajudicial killings, torture and the systematic persecution of homosexuals. Some continue to this day under Castro’s brother, Raúl. Yet in the Prime Minister’s statement, Fidel is nothing worse than “a controversial figure” whose “dedication and love for the Cuban people” is recognized by both his supporters and detractors.

“I know my father was very proud to call him a friend,” the Prime Minister’s statement goes on, “and I had the opportunity to meet Fidel when my father passed away. It was also a real honour to meet his three sons and his brother President Raúl Castro during my recent visit to Cuba.

“On behalf of all Canadians, Sophie and I offer our deepest condolences to the family, friends and many, many supporters of Mr. Castro. We join the people of Cuba today in mourning the loss of this remarkable leader.”

That’s a lot of admiration to offer on behalf of us all, and let’s be clear about one thing: to reject this golden-hued portrait is not to endorse Fulgencio Batista, or the CIA’s repeated attempts to bump off Castro, or the U.S. trade embargoes that first drove Cuba into the arms of the Soviets and later helped beggar its people. The elder Trudeau was right to engage with Havana. Canadians should take pride in their small part in improving Cubans’ standard of living through trade and tourism.

But Canada was not the only democratic country to do so, and engaging doesn’t necessitate overlooking what independent observers regard as extraordinary suppression of basic liberties—decade after decade, without renewal of political legitimacy.

What’s more, diplomacy does not require you to praise a leader when he dies. It demands nothing more than an expression of sympathy and—however nostalgic Trudeau may be feeling—that seems the right response. Fidel Castro was a dictator who trod on rights that we cherish and that Pierre Trudeau enshrined in our Constitution.