Kellie Leitch's constituents turn against her

A 'Not my MP' movement is gaining steam in Leitch's rural riding of Simcoe-Grey, north of Toronto 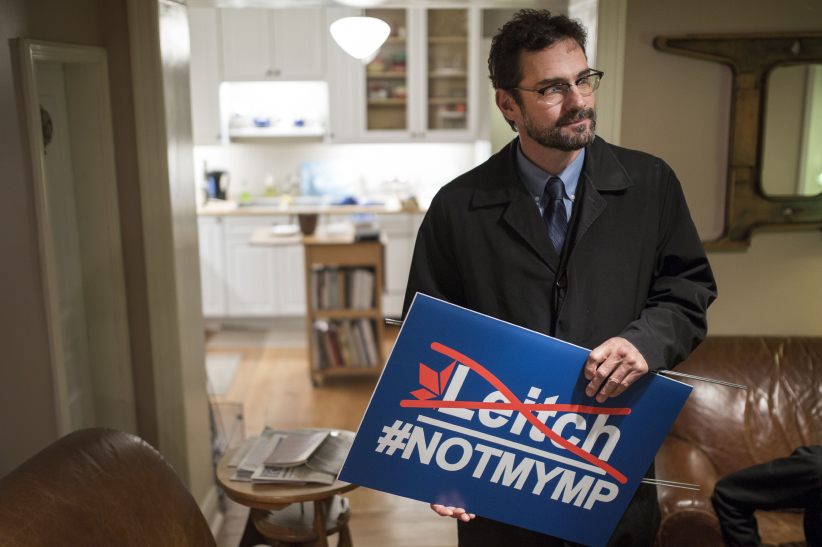 In the village of Lavender, Ont., Mark Ruzylo drives up to a house in darkness, knocks and lets himself in. He hands his friend a wafer-like sign and a wire frame and collects $10. Nighttime delivery work is not Ruzylo’s normal routine; he is a high school vice principal with three children to tuck into bed. The distribution is not easy, as the roads are dirt and homes, highways apart. But on Monday, Ruzylo sets out on this mission because Kellie Leitch, he believes, is not his MP.

Ruzylo is kindling a campaign that promises to gain national attention in coming weeks. He has created and distributed 60 lawn signs in Leitch’s riding of Simcoe–Grey, a district north of Toronto that includes Collingwood and surrounding towns and villages, peaked by the Blue Mountains. This week, Ruzylo will distribute another 200 signs, some of which could show up peacefully on the sidelines of a local Santa Claus parade on Saturday, and his neighbours have also taken to Twitter using #NotMyMp. Based on the American slogan “Not my president,” the campaign is a way for constituents to distance themselves from Leitch’s rhetoric—most controversially, her call to screen immigrants for “anti-Canadian values.”

“I woke up after the election and saw Leitch celebrating Trump’s win,” says Ruzylo. “I thought, ‘We gotta do something.’ ” He came up with the sign idea during a conversation at his men’s book club and quickly hired a graphic designer. The movement doesn’t support any particular political party, and the people who have ordered them include a psychotherapist, organic beet farmer and chemist-turned-doula. “It’s the loaded and loose language,” says Jamie Korthals, a carpenter buying a sign in Lavender. “It’s so vague.” Carl Dalton, a social worker, puts up a sign in the neighbouring town of Creemore. “She can say what she wants about the CBC,” Dalton says of Leitch, “but this [talk of values] intentionally harbours hatred.”

The people of Simcoe–Grey, meanwhile, harbour only dogs and dinner guests, inviting Ruzylo into houses so warm that they seem insulated by giant tea cozies. The 120,000 people in the region are largely working-class people who work in retail, manufacturing, or farming, along with middle- and upper-class professionals who work part of the week in Toronto. (At Ruzylo’s hockey games, locker-room topics range from architecture to garlic.) The demographic of Simcoe–Grey is almost entirely white, with temporary foreign workers arriving from Mexico and Jamaica in the summers. Brent Preston and his wife, Gillian Flies, hire seven Mexican workers and say the men have become part of the community. “We’ll see photos on Facebook of them in a hot tub in Collingwood,” says Flies. “They have more of a social life than us.”

MORE: Why a values test won’t fly in Canada

Leitch is seen by critics as a temporary resident herself, an MP who spends less time in the region than outside of it. From Fort McMurray, Alta., she was parachuted into Simcoe–Grey to win the riding in 2011 under Stephen Harper. Her residence near Creemore features a long driveway leading to a white house, which on a Monday night in November is entirely dark. “Her house is an empty, sterile shell,” says Preston, who has attended one of Leitch’s public breakfast meetings. “It’s a beautiful house on a beautiful property, and there’s no life in it at all.”

Nevertheless, Leitch has supporters—and they might be stealing lawn signs. Carl Dalton says his previous sign, which he erected on Friday, disappeared when he went out to dinner. He bought a replacement sign and worries about another theft. “If it gets ridiculous, I’ll take some initiative to protect it,” he says. Some constituents worry that their neighbours see the signs as an attack on the Conservative party (the riding has voted Conservative since 2004). Ruzylo’s father-in-law, Tony Fry, who ordered six signs for himself and friends, expects the slogan could prevent neighbours from donating to his youth group. However, he says, “I [don’t] care because we gotta do something about Kellie.”

The signs face one other threat: snow. Simcoe-Grey is already seeing its first snowbanks of the season, and the signs are not sturdy. “I’ve thought about that a lot,” says Ruzylo. The solution: “We’ll put them in our windows.”