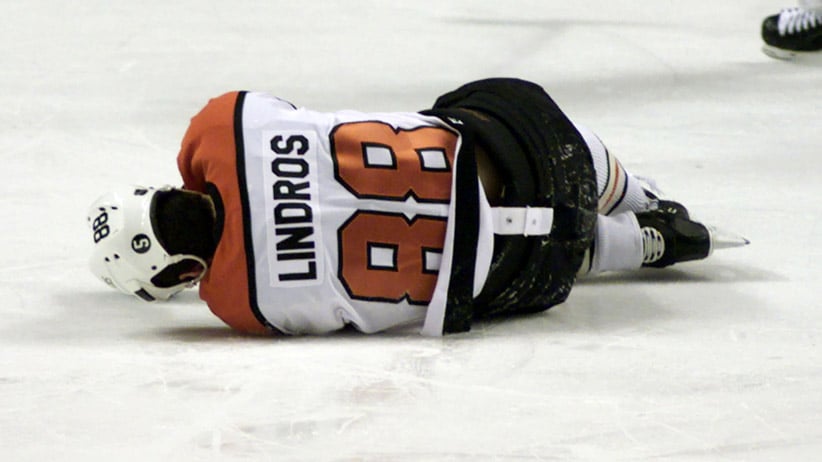 Philadelphia Flyers center Eric Lindros lies on the ice after he was injured on a check to the head by New Jersey Devils defenseman Scott Stevens during the first period of Game 7 of the NHL Eastern Conference Finals in Philadelphia, May 26. Lindros, was playing in only his second game since March due to a concussion.

OTTAWA – Hockey legend Ken Dryden laid down a challenge Tuesday to sports executives in charge of leagues and federations to do more to protect athletes from the debilitating effects of head injuries.

In a blunt speech, Dryden took aim at the culture around concussions and drew a connecting line between head injuries and brain disease.

The statement was a departure from the conclusion of the National Football League’s top health and safety officer, Jeff Miller, who told a U.S. congressional committee in March that linked football to chronic traumatic encephalopathy, or CTE.

There is still much to learn about the brain, he said, but that shouldn’t be an excuse for sports executives to do nothing until researchers unlock more information.

“In some things in our lives, we are the decision-makers and we know sometimes we get things wrong, but we can’t get the big ones wrong,” he said. “The ones where 25 or 50 years from now people will look back at us and say, ‘how could they have been so stupid?’

RELATED: The real danger in hockey

Dryden’s speech punctuated a conference that brought together athletes, coaches, teachers and researchers to figure out what the country can do to address rising concerns about head trauma.

Johnston said the country can do better when it comes to dealing with head injuries, from better awareness of the risks and symptoms of head injuries, to rule changes to mitigate the risks sports pose to young athletes. He said there must also be cultural changes in the way Canadians view head injuries.

“We have to overcome this culture of stiff upper lip, or it’s a bit of a badge of honour to have your bell rung a few times,” said Johnston, who suffered three concussions in his youth, one that led to him losing feeling in part of his left hand.

Former CFL quarterback Matt Dunigan said young athletes and even those at the professional level need to know it’s OK to take themselves out of a game if they have a head injury. Dunigan began tearing up as he talked about stumbling through his words and thoughts, a result he said of multiple concussions during his playing career.

Federal and provincial governments began work in June on a national program to raise awareness, encourage prevention and manage concussions. In a statement, the federal ministers in charge touted a $1.4 million plan to develop national guidelines and protocols.

Former NHL player Eric Lindros said there is a need for a national standard to diagnose and treat concussions that could be taught in schools and help young athletes, coaches and their parents recognize a head injury.

Athletes at the day-long forum said they had issues identifying their own concussions because symptoms can overlap, or be confused with neck or back injuries. Nor can you expect a concussed athlete to know they are experiencing a concussion, said former Paralympic alpine skier Karolina Wisniewska.