One photo, less than 1,000 words: Ken Pagan vs. Everybody

Ken Pagan stands accused by the crowd, and makes us wonder how we look in photographs 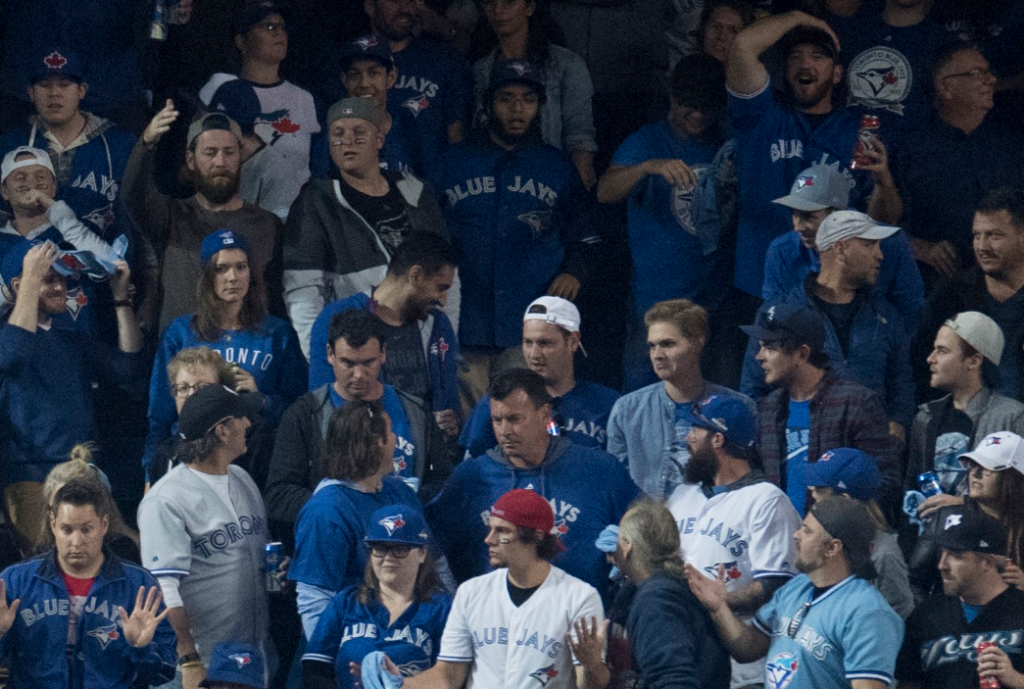 Four rows from the bottom and one row to the left of Canadian Press photographer Frank Gunn’s shot from Tuesday is a woman wearing a backwards baseball cap and a blue sweatshirt. The sweatshirt is a limited Blue Jays run by Peace Collective, a Toronto fashion company. Printed across the front is the phrase it has recently popularized: Toronto Vs. Everybody.

In front of her, head bowed, staring straight ahead, stands a man now identified as Ken Pagan.

In the bottom of the seventh inning of the Blue Jays wild card game against the Baltimore Orioles, someone threw a mostly full king can of Bud Light onto the field during play, narrowly missing Orioles’ left fielder Hyun Soo Kim as he tracked a fly ball. A moment later, this photograph was taken. And in the days that have followed, the picture consumed Toronto—because of what it shows as much as because of what it might not show.

In the hours that followed the incident, the people in this photo came to reflect the city as a whole, the majority of the faces within it marked with either incredulity or confusion. Seconds after the beer can nearly hit Kim, social media filled in equal measure with regret and remorse. When it emerged that during the same game, others had tossed not beer but racial barbs, the apologies redoubled. Toronto, so accustomed to having the finger pointed its way, so accustomed to apologizing for itself, that someone made it into a T-shirt slogan, quickly tread a well-worn path. We are sorry, everybody. But you see, while that crowd is us, also it is not. Only some of us are racists. Only one of us is a beer thrower.

Related: The Toronto Police let the Jays beer thrower—and all of us—down

Yet for a time, it seemed as though we might not know where to draw those lines of distinction. For a time, the beer thrower continued to live anonymously among us (the racists still do). As much as we searched for the beer thrower, our collective numbers granted them protection, just as they had Tuesday night, when they were able to escape the stadium before the police got to the scene of the crime. And until that changed, we would all be collectively guilty. We would have to keep apologizing.

The police zeroed in on this photograph, cropping Pagan’s face, accentuating his forward glance, making it appear as a glowering glare. Then they tweeted it. Here is a person of interest. Not guilty, but interesting, don’t you all think? Many agreed. The Sun newspaper quickly offered $1,000 for information about the thrower, a “boob” at whom the paper was “appalled.”

“The gig is up,” the Sun stated. “Handcuffs and court dates await.”

So the crowd split again, not along lines of guilty and innocent, but as so often is the case these days, between those who subscribed to the official story (who now, on the hunt for the perpetrator with the promise of bounty, became a mob), and those who believed there was a greater truth to be found in the footage.

Armed with slow motion on their cable boxes and YouTube, the Beer Toss Truthers examined the evidence. Was the forward-facing man responsible? What about the following photo frames, the ones showing him calmly drinking beer from an open cup? What about the empty space beside him, where at least one person could have been standing a second earlier? Was someone ducking behind that row of people? What about the grainy image of someone’s hand holding a can aloft?

For his part, Pagan, who was charged Thursday with mischief, has only said, “I was drinking out of a cup. I’d love to tell you what happened and my story … but I can’t say anything.”

We understand that nearly everywhere we go in our lives, we are being recorded. Our emails and faces are scanned. Our profiles are monitored and dredged for their data. Most of us, by the end of our lives, will have appeared on a closed-circuit television thousands of times. We are being benignly recorded, too, by each other, most often inadvertently, in the background, but sometimes with purpose. It is, to borrow a phrase, you versus everybody.

To ask how you look in any of those photographs and screenshots might sound narcissistic, but there is a great importance to that query.

For, one can’t help but wonder what might have happened if Pagan had been looking in another direction Tuesday night, as Frank Gunn snapped this photograph, rather than staring forward. Or if he, like the man two rows below him to the left of the frame, had held his hands up in a recognizable gesture of proclaimed innocence. Or if he’d sipped from his open, full, beer cup a second earlier. Everyone around him may have still been looking his way, but would the rest of us still have trusted their gaze? Would we have looked at him the same way that it so obviously seemed they were in the moment captured here?

But Pagan was staring forward. And a photo was taken.