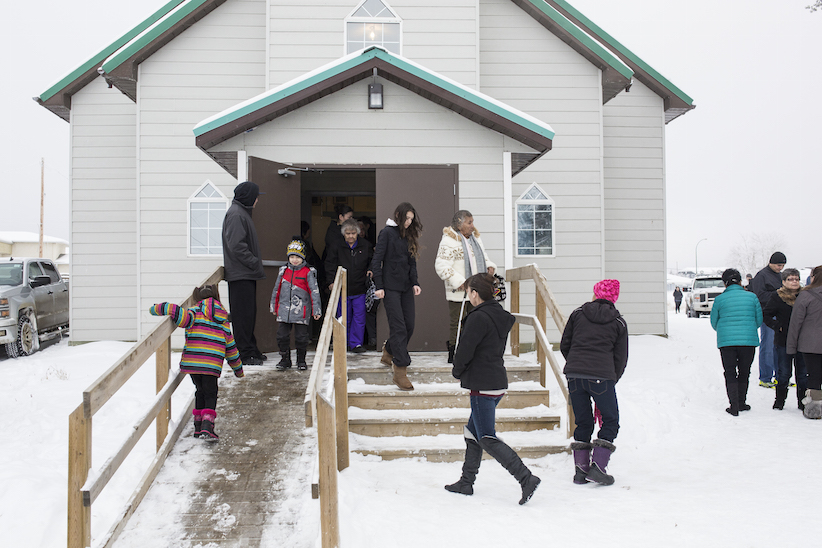 Local residents from La Loche, Sask. gather in support after attending church in the small community of Northern Saskatchewan on Sunday, January 24, 2016. (Photograph by Chris Bolin)

LA LOCHE, Sask. — Leaders in a remote northern Saskatchewan community are to speak today about the town’s recovery from a deadly school shooting almost a year ago.

Seven others were hurt at the school.

The shooter also killed two brothers: Drayden Fontaine, 13, and Dayne Fontaine, 17, before he went to the school.

Bullet holes that riddled the walls at the school have been fixed, students have returned to classes and the government announced measures for La Loche in education, health, housing and infrastructure.

But the wounds from the shooting run deep.

Substitute teacher Charlene Klyne lost all sight in her left eye and can only see shadows with the other. She needed surgeries to remove pellets lodged in her upper body.

She said last fall that the victims were promised help, but little had been given and it was “like being victimized every day over and over again.”

No agreed facts about what happened — including a motive — were submitted to the court.

At the time of the shooting, the teen’s friends described him as the black sheep of his family and a victim of bullying at school. One person said the teen was often teased about his large ears.

Another student kept a screenshot of a chilling exchange that took place on social media just before the shooting.

Mounties, who responded to panicked calls from staff and students, said the shooter was inside the school for about eight minutes. The building’s main doors had been blasted with holes. Some students fled; others hid in fear.

A news release from the community says students won’t be in the school during Monday’s event. A private day of observance for the community is planned on the anniversary.

A sentencing hearing is scheduled for the teen for May in La Loche.

There have been calls for him to be sentenced as an adult. He turned 18 shortly after the shooting.

The maximum youth term for first-degree murder is 10 years in custody. An adult receives an automatic life sentence and, under a new provision for multiple murders, can receive consecutive periods of parole ineligibility of up to 25 years for each victim.

Klyne said the shooter’s age, combined with the magnitude of the crime, is as close to an adult as a criminal can get.

“I hope he never gets out.”