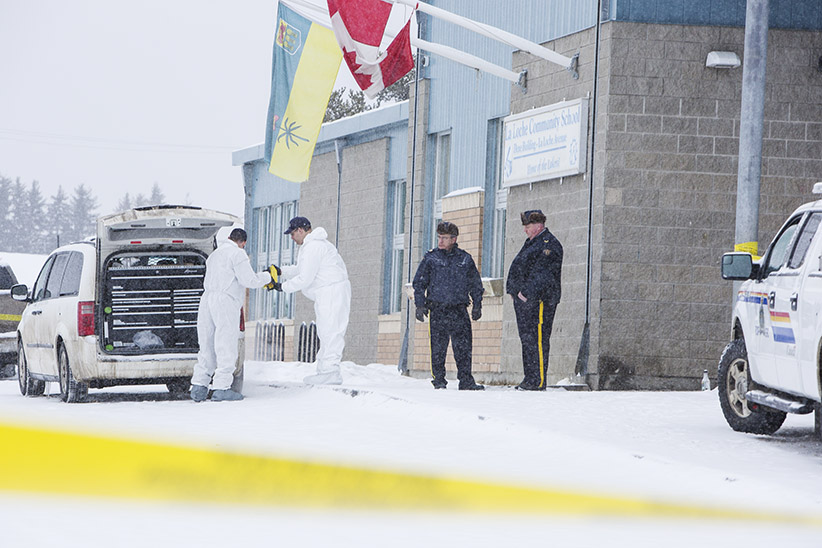 LA LOCHE, SASKATCHEWAN – JANUARY 23, 2016: RCMP gather evidence at the scene of the school shooting in La Loche Community School in La Loche, SK that left 4 dead and 7 injured. A 17-year-old boy faces four counts of first-degree murder, seven counts of attempted murder and one count of unauthorized possession of a firearm in relation to a series of shooting in the northern Saskatchewan town of only 2300 people. ( Photos by Chris Bolin For Macleans Magazine)

LA LOCHE, Sask. – The doors of a northern Saskatchewan high school that was the site of a deadly shooting are reopening.

Teachers will be back at the La Loche high school Monday and classes are to resume shortly after that for students.

The community is organizing a “Reclaiming Our School” walk for Wednesday.

The school has been closed since a teacher and an aide were killed and seven other people were wounded Jan 22; two teenage brothers were also found dead in a nearby home.

Betsy Kelly, executive director of North Sask Victim Services, has been in La Loche offering support to victims and the community.

Kelly says it can take a while for a community to work through the grief, but she described La Loche as “a very strong community.”

“I always compare it to a person’s grief,” says Kelly. “As an individual, you don’t get over grief in a month or two, it can take years. And similarly a community, it will take many years to be able to move forward.”

Kelly says she thinks the community of La Loche has shown “amazing resilience and strength.”

“I think they’re doing it through helping one another at a very grassroots level and that includes, you know, they have strong spiritual beliefs, they have extended families and they’re doing the very best that they can do,” she says.

Notes from a Feb. 4 meeting of parents posted on the school’s Facebook page said the majority of parents wanted students back in class “the sooner the better.” They agreed elementary students should return Feb. 23 and suggested high school students go back March 1.

An open house and cultural event for students and community members will be held in the high school Wednesday.

The town’s mayor, Kevin Janvier, initially suggested the building needed to be torn down so people could heal. He has since changed his mind, saying education needs to be a priority.

A Facebook post says a parent meeting will be held Monday night with Kevin Cameron, executive director of the Canadian Centre for Threat Assessment and Trauma Response.

Cameron led the crisis response team after a 14-year-old boy fired shots in a high school in Taber, Alta., in 1999. Seventeen-year-old Jason Lang was killed and another boy was hurt.

Bullet holes in walls were repaired at Columbine and students eventually returned.

“The school was not torn down,” says Diana Wilson, chief communications officer for Jeffco Public Schools in Colorado.

“We kept the same name and we kind of went through that process of, it wouldn’t change what happened and if we’re going to live with that memory anyway, may as well go forward with what we have.”

“And I think that looking at the incident as, ‘this was a horrible tragedy, but let’s move forward and stick together,’ was really the attitude, that now, 17 years later, this is a very strong community,” she says.

A 17-year-old boy, who can’t be named under the Youth Criminal Justice Act, has been charged with first-degree murder and attempted murder in the La Loche shooting. Friends have said he was an outcast at home and a victim of bullying at school.

His next court appearance in Meadow Lake, Sask., is also set for Monday.