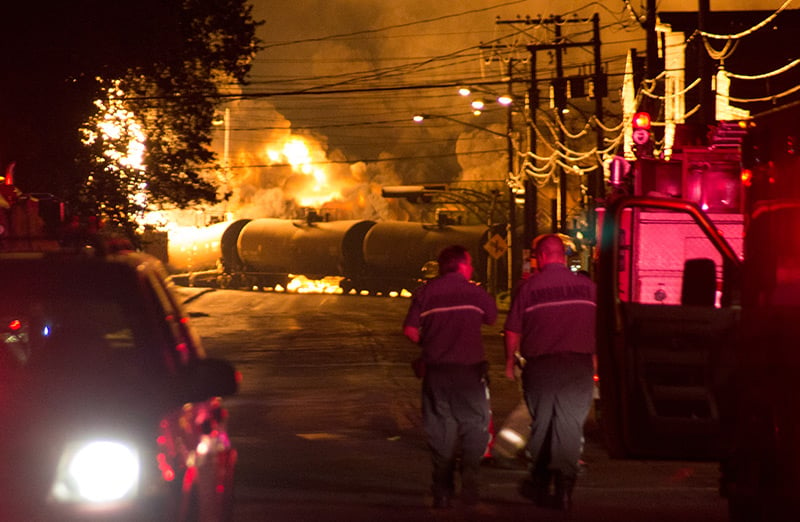 LAC-MEGANTIC, Que. — On the third anniversary of the Lac-Megantic rail disaster that killed 47 people, some residents renewed their calls for the construction of a bypass track that would redirect trains away from homes and businesses in the town.

They want the trains removed immediately — not in a few years time as indicated in a feasibility report presented to citizens last May — Robert Bellefleur, spokesman for a local rail-safety coalition group, said Wednesday.

While the tragedy led to tougher government regulations with regard to the transport of oil by rail, Bellefleur said Justin Trudeau needs to commit to the bypass project and speed up the process to get it done.

“The prime minister has to come and announce as soon as possible the construction of the bypass track and, in the meantime, he needs to do something to repair the railroad, which is in a sorry state.”

The May report, conducted by engineering firm Aecom, said redirecting the railroad from the downtown core would cost $115 million.

On July 6, 2013, a runaway train carrying crude oil from the United States derailed in downtown Lac-Megantic and exploded, killing 47 people and destroying part of the city centre.

The disaster led to hundreds of millions of dollars in clean-up and reconstruction costs as well as the bankruptcy of Montreal, Maine and Atlantic Railway, the company that owned and operated the tracks.

A few dozen people gathered on Wednesday in nearby Nantes, near where the train began its downward descent into Lac-Megantic that summer night in 2013.

Bellefleur said he remembers many of the people he lost that day.

“I still see my daughters’ two nannies, I see my contractor who was supposed to come and repair my roof, I see the man who sold me my car, I see my uncle’s sister-in-law and my cousin’s son,” he said. “I see a whole bunch of people I lost — that we all lost.”

Trudeau issued a statement Wednesday to say rail safety remains a priority for his government but there was no reference to the citizens’ request for a track bypass.

“In the face of unimaginable pain and loss, the people of Lac-Megantic have shown incredible resilience and courage.”

Three men, including train conductor Tom Harding, are each facing 47 counts of criminal negligence causing death related to the tragedy.

Harding, his former colleagues Richard Labrie and Jean Demaitre, as well as the railroad company — which is under bankruptcy protection — have all pleaded not guilty to the charges.

Various motions are expected to be heard before the trial gets going in several months.