2012 Newsmakers: Lance Armstrong's arrogance in the face of incontrovertible truth. Livestrong, as if. 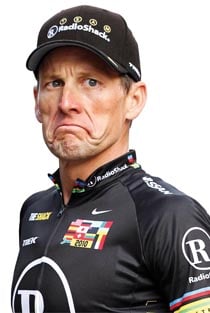 When the shock had worn off and tempers had cooled, the wonder lay not in his misdemeanours but in his resolve. It’s one thing to cheat, another to lie. But to cheat and lie for so long—to draw in teammates, to bind them with threats, to lay waste to their reputations when they confessed—who among us could have done it? We’re used to learning our heroes have feet of clay, that they dope or drive drunk or cheat on their spouses. This was different. Lance Armstrong wasn’t revealed to be human this year. He was revealed to be inhuman.

The lies took more than a dozen years to fall away, hanging this summer by the threads of Armstrong’s brazen denials. Since the first whiff of suspicion back in 1999, when a former French rider spoke publicly about widespread doping in cycling, Armstrong had been on the offensive. He publicly attacked that rider, Christophe Bassons, inviting him to “go home” from the 2000 Tour de France. He ridiculed and sued the truth-sayers who followed—riders, journalists, and racing officials who alleged widespread doping at the highest echelons. In a 2001 TV ad for Nike, Armstrong all but laughed in their faces: “What am I on?” he snarled. “I am on my bike busting my ass six hours a day. What are you on?”

But the drip, drip of revelation kept coming, culminating two years ago in the stunning admission by Armstrong’s former teammate, Tyler Hamilton, that he and Armstrong had taken the blood-doping hormone erythropoietin (EPO) before and during the 1999, 2000 and 2001 Tours. Finally, in October, the U.S. Anti-Doping Agency (USADA) published its jaw-dropping report on doping on the U.S. Postal Service and Discovery teams Armstrong had led in his seven Tour de France victories. Armstrong wasn’t just a participant in the teams’ doping program, by USADA’s estimation; he was the doping program. His unquenchable appetite for Tour victories, the report said, “led him to depend on EPO, testosterone and blood transfusions, but also, more ruthlessly, to expect and require that his teammates would likewise use drugs to support his goals if not their own.”

Barring some remarkable development, herein lies Armstrong’s legacy—cheater, dissembler, megalomaniac, bully. Through a lawyer, he answered the USADA revelations with customary bluster, dismissing them as a “taxpayer-funded tabloid piece rehashing old, disproved, unreliable allegations.” But the weight of the report lay in the testimony of 11 teammates, along with members of the teams’ support staff, some of whom had upheld cycling’s code of silence until the end. Taking Armstrong’s word over theirs required one to believe they would destroy their own reputations merely for the chance to sell him out. He was an unpopular figure by the end. But not that unpopular.

Now, about the most virtuous take on the 41-year-old Texan is that of a Monty Pythonesque knight—dismembered yet deluded into believing he can fight on. Both USADA and the International Cycling Union have stripped Armstrong of his Tour titles. Nike and Oakley have cut him loose from endorsement deals. Meanwhile his lawyers have evidently advised him to start cutting his losses: three weeks before USADA released its report, Armstrong announced he would no longer contest the agency’s doping charges against him.

Yet even as the contents of the report sped round the world, Armstrong affected nonchalance: “What am I doing tonight? Hanging with my family, unaffected, and thinking about this,” he tweeted. For years, his denials had fed into his image as a warrior battling envious foes, slapping down the non-believers in his story of recovery from cancer and a drug-free climb to the pinnacle of his sport. That myth, importantly, helped sustain his non-profit, Livestrong, which has raised hundreds of millions of dollars to promote cancer awareness while putting a human face on the scowling figure familiar from Tour broadcasts. Livestrong transformed the cyclist into a global celebrity on par with Bono or Bob Geldof. For a time, noted Phil Liggett, a veteran cycling broadcaster and a long-time defender of the star, Armstrong had President Barack Obama on speed dial.

No longer. On Oct. 17, Armstrong stepped down as Livestrong’s CEO, while the once ubiquitous yellow bracelets the foundation sold to raise money are an increasingly rare sight. Neither donors nor cancer survivors are inspired by dishonesty. Armstrong’s dedication to his deception puts him in a class by himself—the sort who would rather paint the team masseuse (Emma O’Reilly) as a drunk and a prostitute, or savage an athlete laid low by doping revelations (Floyd Landis), than admit that the jig is up. It’s no wonder, then, that in the wake of the USADA findings, reports circulated that wearers of those yellow wristbands were crossing out the ‘V’ in the word Livestrong, so that the bracelets read “Liestrong.” It might not be Lance Armstrong’s epitaph but it’s a burden he must bear for the foreseeable future, and one to make the mountain portion of the Tour de France seem a breeze by comparison.