'I think it is a real tragedy,' says the rookie Liberal MP with Ukrainian heritage 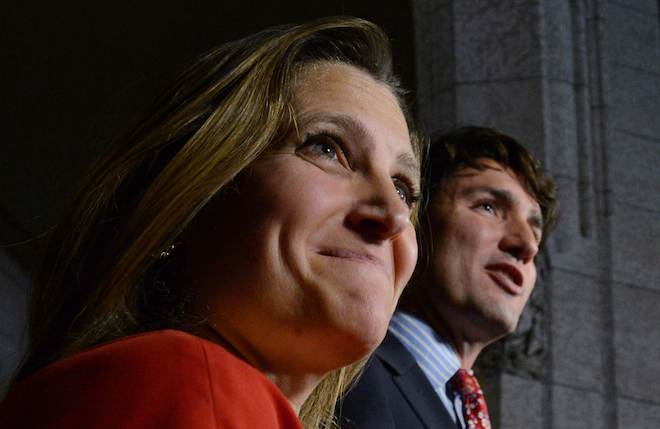 As the Liberal party’s policy convention gets underway this evening in Montréal, rookie Toronto MP Chrystia Freeland will be onstage interviewing U.S. economist Lawrence Summers. Freeland is being showcased for her economic policy chops—she’s the author of Plutocrats, an award-winning book about income inequality—but I wonder if, given the timing, it wouldn’t be more interesting to hear her hold forth on the grim situation in Ukraine.

Freeland happens to own, with her sister, an apartment that overlooks the Kyiv square where the world has watched barricades built and burned, and clashes between determined anti-government demonstrators and police doing the dirty work of an increasingly ruthless regime. Before she was an economic journalist and author, Freeland studied Russian history. She speaks Ukrainian, thanks to her Ukrainian-Canadian mother, and studied and lived in Kyiv during two stints back in the late eighties and early nineties.

In an interview this afternoon, Freeland told me she is “absolutely preoccupied” with the alarming situation in the country to which she is so closely attached. (She had been checking Ukrainian social media moments before we spoke.) “I think it is a real tragedy,” she said of the crackdown in recent days on anti-government demonstrators. “It needs to transcend political parties.”

Since December, the Liberals has been pushing for Canada to impose sanctions against the government of President Viktor Yanukovych. Freeland said those sanctions should include restrictions on travel by Yanukovych’s officials and the confiscation assets they and their families might hold abroad. She added, “I think we need to provide a refuge for protestors who may be fearing for their lives and their families.”

As well, Freeland said Canada, as home to such a large population of Ukrainian immigrants and their decendants, has the standing to play a role in brokering a deal between the government and the protestors. “We really could do that—Canada has an disproportionate voice there,” she said. Going further, she called for pressure to hold elections to replace Yanukovych. “I think we have to say this government is illegitimate, there need to be new elections, and offer to have those elections held under international auspices.”

For more on this story, Maclean’s has this report from Katie Engelhart in Kyiv and this analysis from Michael Petrou. For more on Freeland’s view, here is a recent piece she wrote on the situation for Prospect.