'Honey was well aware that evil and brutality are powerful forces in this world. She may not have known that they would consume her own life.' 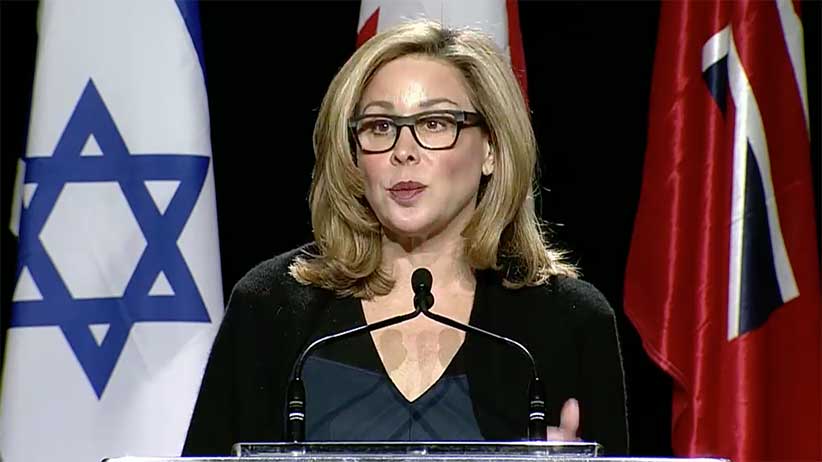 Thousands of people attended the memorial Thursday for Barry Sherman, the founder of Apotex Pharmaceuticals, and his philanthropist wife Honey. Barry, 75, and Honey, 70, were found dead in their home last Friday. Police have released few details about their investigation, but have said an autopsy showed both died of “ligature neck compression.”

During the memorial, which was attended by politicians from all levels of governments, Sen. Linda Frum paid tribute spoke of her long-time friends, while obliquely addressing the mystery of how they died.

Here is an excerpt from her speech:

Sen. Linda Frum: My name is Linda Frum. It is a privilege to say I was a friend of Honey and Barry Sherman’s. I stand here today among thousands of other friends. I will do my limited best to speak for all of us. Today we have heard many great things about the lives of Honey and Barry, their devotion to their family, their generous support for their community, Barry’s significant medical and scientific contributions, the colossal success of Apotex, and of Barry’s immense pride in providing meaningful employment to so many Canadians.

In my remembrance, I’d like to speak about what it meant to enjoy the precious gift of their friendship. Like their philanthropy, this was a gift they bestowed widely and unstintingly. In my case, my friendship with Honey began during a UJA mission to Israel. Honey and I were travelling together without our husbands as part of a small leadership team. At that time in my life, I was a very anxious flyer, and Honey intuited my fear. Though we were only new acquaintances, she made a point of sitting next to me. I can still picture how, during one of the numerous flights we shared together, Honey would be absorbed in the newspaper she was reading, but as the airplane started to speed towards liftoff, silently, without looking up, she would stretch out her hand for me to hold. I preserved this image of Honey in my mind because it is how I will always think of her: as a woman who, by natural inclination, extended an open hand of love, friendship and kindness out to the world.

It was easy to love Honey, and everybody did. When Honey liked someone back, her highest accolade was to deem them a good boy or a good girl. This term was usually applied to individuals well past middle age who had won her approval by contributing to a cause bigger than themselves, or who had revealed themselves to be people of high character through acts of caring and generosity. Recently, I asked Honey what motivated her in her life. Why did she live the way she did, so focused on others, so consistently engaged in acts of charity, rather than the usual selfish pursuits of billionaires? She answered that she was sure being the daughter of Holocaust survivors had much to do with it, and I don’t doubt that this was true. Honey was well aware that evil and brutality are powerful forces in this world. She may not have known that they would consume her own life. But while she lived, she fought on behalf of the causes of justice, tolerance, and compassion.

But another explanation for Honey’s good nature and her good deeds was Barry. Honey and Barry loved and respected each other deeply, and their values effortlessly aligned. This past July, Honey and Barry spent an overnight with my husband Howard and me at our cottage, a memory I’ll always cherish. This visit to Muskoka felt like a victory, not because Honey had decided to come—she had done that readily; but because Barry had agreed to take a day off work to join her.

WATCH: The memorial for Barry and Honey Sherman

When they first arrived at our place, Honey and I spent a few minutes standing in the driveway debating which accommodations would best suit them: the smaller, less comfortable bedroom in the main cottage, where the rest of our weekend guests were staying; or the larger bedroom up the hill in the guest cottage, where they could spread out and enjoy some privacy. While Honey insisted she wanted to be wherever the action was, and I tried to persuade her that she would be more comfortable in the larger but more isolated space, Barry stood quietly between us. Across his right shoulder he had slung his heavy piece of baggage. Across his left shoulder rested Honey’s even heavier bag. Balanced precariously between his two arms was a stack a dozen high of bakery boxes filled with treats that Honey had insisted on bringing up to share with friends on the lake. You couldn’t even see Barry’s face behind the boxes. But he waited patiently for Honey to make her verdict on which bedroom she wanted, which was obviously where the action was, and then he cheerfully sherpaed their belongings to the room while Honey and I peeled off to start the party.

Later, after a most enjoyable evening of good food and wine—and, since Honey was there, abundant laughter—Barry quietly approached me. Don’t you think it’s unfair, he asked me. I asked him what he meant. Don’t you think it’s unfair that we get to enjoy all this, this beautiful life, while so many others, they don’t? It was this social conscience of Barry’s, always so close to the surface, which led him to so many acts of charity, including donating millions of HIV/AIDS drugs to Africa and spending millions of dollars to develop a drug designed to save the lives of a statistically tiny group of people, a tiny group of children, with no expectation of commercial return.

Someone asked me if Honey was in good health when she died. I don’t think Honey was ever in what could be called good health from the time I met her. And yet, between multiple back, hip, and shoulder surgeries for her crippling arthritis, to recently surviving throat cancer, Honey was the most fun-loving, energetic, and uncomplaining person I ever met. Last December, I asked her to send me a clip of her dancing for a surprise video I was assembling for Howard’s birthday. She promptly sent me back a video of her and Barry laughing and dancing together, her foot in a cast up to her knee.

One of the last times I saw Honey was three weeks ago in Ottawa, where she had travelled to accept a Senate medal that I had the privilege to award to her in recognition of her and Barry’s immense contributions to Canada. I am so grateful that, in retrospect, fate gave me that opportunity to offer Honey and Barry Sherman a fulsome thank-you for their lifelong goodness and open-handedness. Today I wish to add another, more personal thank-you.

Thank you, Honey, for the warm embrace of your friendship, one of the sweetest in my life. Finally, to Honey and Barry’s children, and to the larger Sherman and Shechtman families, we have no comfort or consolation to offer you, other than to tell you that, like you, the wound in our hearts is deep. Like you, we adored Honey and Barry. And like you, we will endeavour to honour them forever and ever.