Every Olympics features plenty of winners, but many memorable moments come from those who don't. 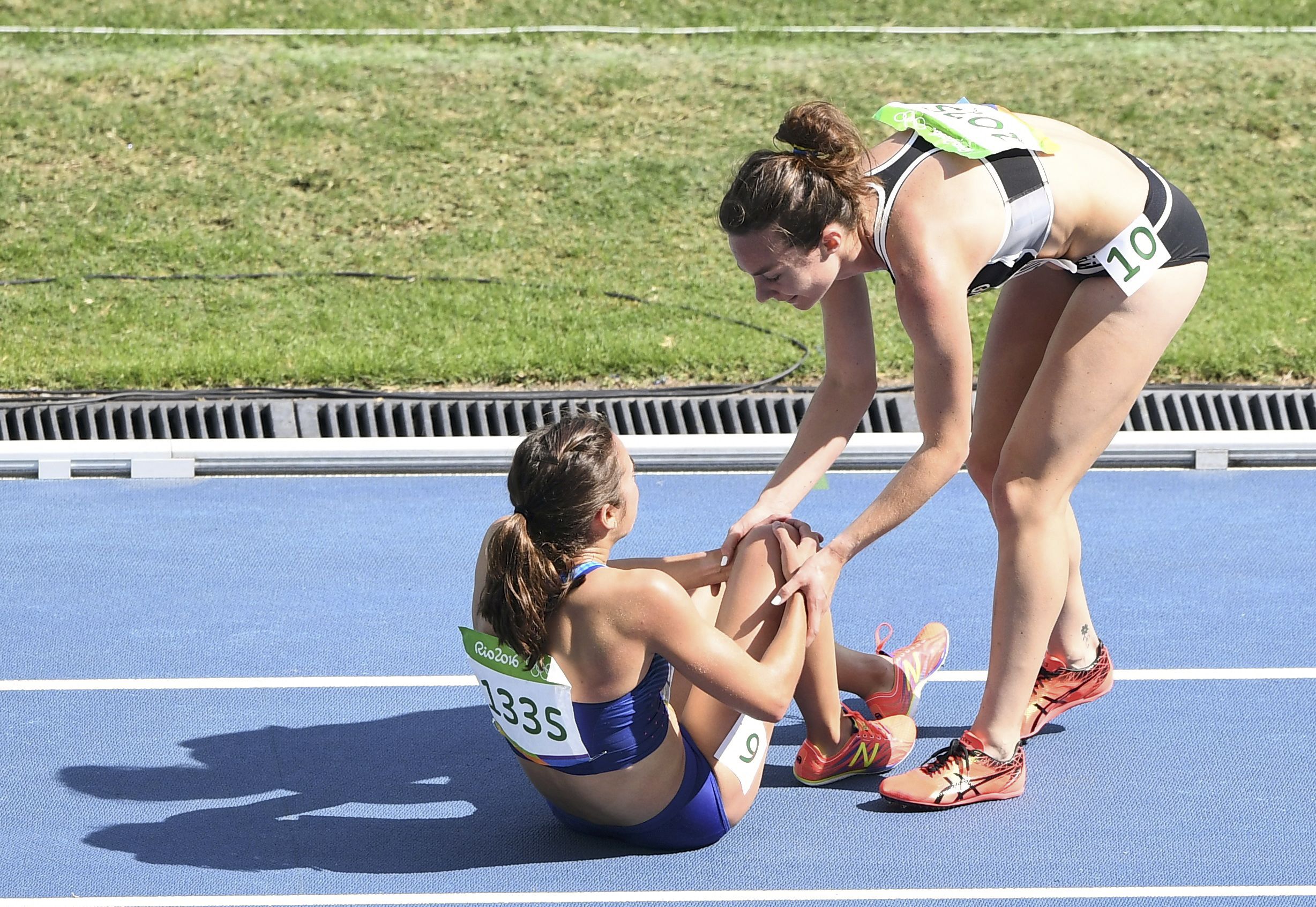 RIO DE JANEIRO – In a world in turmoil, one thing never changes: the Olympic sport of losing gracefully.

With a crisp, assured landing of his final somersault off the parallel bars, Oleg Verniaiev bumped Danell Leyva out of the gold-medal spot. Did the American curse? Turn his back? Roll his eyes in disgust? No. He firmly shook the Ukrainian’s chalk-covered hand, flashed a broad smile and embraced him.

“He didn’t take anything away from me,” Leyva said. “He deserved that medal more than anything.”

With a hand on her shoulder and the words “Get up, get up, we have to finish this,” Abbey D’Agostino persuaded Nikki Hamblin not to quit when they tripped over each other and hit the deck hard in qualifying of the women’s 5,000-meters. An American and a New Zealander, perfect strangers, turning personal disaster into a triumph of Olympic goodwill.

“Isn’t that just so amazing?” Hamblin said. “I’m never going to forget that moment. When someone asks me what happened in Rio in 20 years’ time, that’s my story.”

When troubled people seethe with hatred, gunning each other down in Rio de Janeiro’s favelas, stabbing fellow passengers on European trains and plowing through families on the seafront in Nice, France, with a 19-ton truck, it is genuinely comforting that 11,400 athletes from 205 nations can still come together for two weeks of Olympic competition and treat each other with such respect. They have gone at each other hammer and tongs in swimsuits, leotards and running shorts on fields of play but mostly been the picture of grace once done with competing.

In the 1940s, author George Orwell scathingly wrote that “serious sport has nothing to do with fair play. It is bound up with hatred, jealousy, boastfulness, disregard of all rules and sadistic pleasure in witnessing violence: in other words it is war minus the shooting.”

Hearing British gymnast Amy Tinkler gush about the “honour” and “privilege” of competing against American Simone Biles surely would have tempered Orwell’s opinion. Tinkler’s score of 14.933 on the floor was good for gold until Biles bested that with a 15.966. Afterward, Tinkler still made a point of seeking out the now four-time gold medallist to give her hug. And she applauded when Aly Raisman posted 15.500 to bump Tinkler from silver to bronze. Just 16 and yet already oozing class seen too rarely from other athletes away from the games, most notably in professional soccer, who could do themselves some favours by following her example.

Here, from Tinkler, common decency that would have to be extracted with forceps from the likes of Cristiano Ronaldo or Manchester United’s new coach, Jose Mourinho.

“I would have been happy whatever the result was,” she said. “All the gymnasts here are incredible and you have got to respect that. They have all worked just as hard as me to get to this place.”

In such fine company, sore losers stand out more than they would outside of the feel-good Olympic bubble. U.S. goalkeeper Hope Solo labeling opponents a “bunch of cowards” would have made waves in any context. But the insult, aimed at Sweden after a penalty shoot-out loss that put the top-ranked U.S. team out of the medals in women’s soccer for the first time, felt especially jarring at the Olympics.

Equally sour was French pole vaulter Renaud Lavillenie ‘s reaction to heckling from a partisan crowd rooting for Brazilian Thiago Braz da Silva, who won gold. The crowd did not, as he said, “spit on” him, but did boo vociferously. Hardly a new phenomenon in sports or one unique to Brazil. Orwell wrote 70 years ago of spectators who “try to influence the game by cheering their own side and ‘rattling’ opposing players with boos and insults.”

By likening the atmosphere in Rio’s Olympic Stadium to Adolf Hitler’s propaganda games in Berlin in 1936, Lavillenie showed poor taste and a poor grasp of history. The world record holder later apologized for that “big mistake.” But he was still weeping the next day, when he collected his silver medal.

Topping the table of foul behaviour are Egyptian judo athlete Islam El Shehaby , sent home after he refused to shake the hand of Israeli Or Sasson, and Irish boxer Michael Conlan. Conlan may have a valid point about puzzling judging decisions at the games, but the bronze medallist from the 2012 London Games didn’t deliver it with his tirades of bad language and obscene gestures after losing to Russia’s Vladimir Nikitin.

Perhaps it’s too much to ask that everyone embrace the Olympic spirit. But enough athletes are doing so to keep that noble idea alive.