A sneak peek at our latest cover story, on newsstands this week 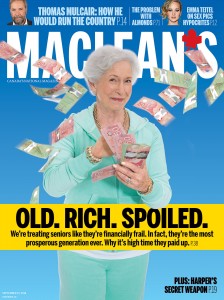 Seniors have long been considered society’s most vulnerable citizens, fragile pensioners on fixed incomes in need of a financial helping hand from both government and agile younger workers. But thanks to stock market booms, economic growth, a soaring real estate market and a major expansion in both private and government pension plans, today’s seniors are arguably the wealthiest generation in history.

Canadians age 75 and older make up less than seven per cent of the population, but control more than a third of all financial assets in the country—roughly $1 trillion worth of stocks, bonds, mutual funds and cash. Their wealth has quadrupled during the past 30 years, far outpacing the growth of wealth among younger Canadians. Today, the poverty rate among seniors is the lowest of any age group; it’s one-third the poverty rate among children.

The dramatic change in the fortunes of seniors, from the impoverished pensioners of yesterday to today’s wealthy retirees, is among the greatest policy success stories in Canadian history. Yet as our cover story explains, there’s a dark side to the success — one that threatens to spark an ugly generational crisis.