Two scientists on Canada's COVID-19 Immunity Task Force will join Wells to discuss the progress in the fight against the coronavirus—and the dangers that lie ahead—on July 2 at 7 p.m. EDT 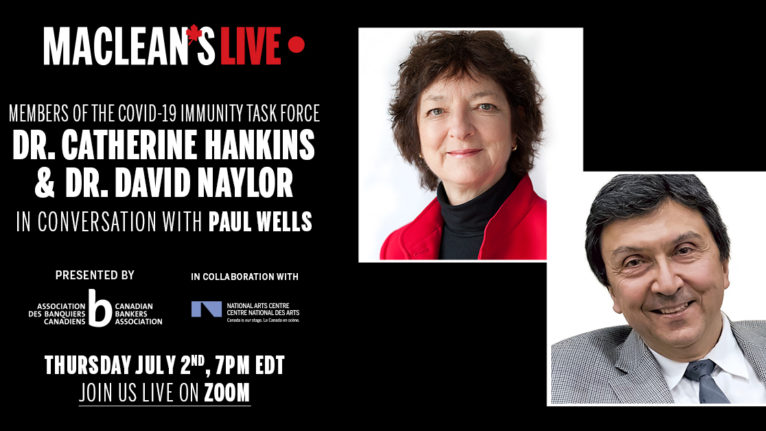 Some of Canada’s top scientists are working on answers for the federal government’s COVID-19 Immunity Task Force. Two of them will join Maclean’s senior writer Paul Wells to discuss the crucial next steps in the fight against the pandemic on July 2 at 7 p.m. EDT.

Dr. Catherine Hankins, a professor of public and population health at McGill University, has been one of the world’s leading researchers in HIV/AIDS for 35 years. Dr. David Naylor, a professor of medicine at the University of Toronto, was UofT president from 2005 to 2013. His report on Canada’s response to the 2003 SARS outbreak led to the formation of the Public Health Agency of Canada.

With their colleagues, Hankins and Naylor are leading the fight to develop an antibody test that can help get Canada back to work. On July 2, they’ll update us on their progress and the dangers that still lie ahead.

Watch the conversation live via Zoom on Thursday, July 2 at 7 p.m. EDT. Click here to join the Zoom webinar.