Manchester bombing: May warns another attack 'may be imminent'

Police confirm 22 dead and 59 injured in bombing at Ariana Grande concert in Manchester Monday night. Here's what we know so far.

On Monday night a suicide bomber attacked Manchester Arena following an Ariana Grande concert, resulting in numerous casualties. Details are still coming in, but here is what we know so far:

• British Prime Minister Theresa May said the U.K. raised the terrorism threat level to critical—meaning another attack may be imminent. The level had stood at the second-highest level of “severe” for several years. As a result of the higher threat level, May said armed soldiers may be deployed instead of police at public events.

• Manchester police confirm that the man suspected of being the suicide bomber is 22-year-old Salman Abedi. Prime Minister May said Abedi was born and raised in Britain and may be part of a larger network.

• Manchester Police have confirmed there are 22 dead so far from the attack, with 59 injured.

• Confirmed among those deceased are an 18 year-old college student and an 8 year-old girl. The Manchester Evening News is also reporting that 28 year-old John Atkinson was also killed in the bombing.

• Earlier, police said they had been treating the bombing as an incident carried out by one person, and said they are still figuring out whether they was “part of a network.”

• Police also say they have arrested a 23 year-old man in connection with the incident.

• Police also reportedly have obtained CCTV footage of the bomber. According to the Guardian, the footage “shows the explosion was deliberate and caused by a suicide device, believed to be contained in a bag, a source said. The device is described as homemade and crude.”

• The Guardian reports that families of the injured have told news outlets that some of those caught in the blast are undergoing surgery to have metal bolts removed from their bodies.

Relatives of a woman missing in the attack told South West News that victims were left with metal bolts embedded in their bodies.

Paul Dryhurst’s niece Kelly Brewster, 32, is feared to have been killed when she visited the Arena with her sister Claire Booth, and Claire’s daughter Hollie, 11.

All three were caught in the blast and Claire, 34 and Hollie were today being treated in hospital for horrific shrapnel wounds.

Speaking from his home in Sheffield, Dryhurst Claire and Hollie were having bolts surgically removed from their bodies.

• Ariana Grande tweeted that she is “broken. from the bottom of my heart, i am so so sorry. i don’t have any words.”

• Here is how a witness described what she saw to Sky News.

‘As I turned around, BOOM! A man told us to run’ – Eyewitness mum was at the Manchester Arena concert with her 11-year-old daughter pic.twitter.com/Kh5vQ1LxDT

• On Monday morning Prime Minister  May gave a statement outside 10 Downing Street in London, saying: “All acts of terrorism are cowardly attacks on innocent people, but this attack stands out for its appalling sickening cowardice.”

“All acts of terrorism are cowardly attacks on innocent people, but this attack stands out for its appalling sickening cowardice” pic.twitter.com/Rpmg6AzjId

• The explosion occurred in the midst of a national election. U.K. Election campaigns were halted on Tuesday.

• Queen Elizabeth II issued a statement as well. “I know I speak for everyone in expressing my deepest sympathy to all who have been affected by this dreadful event and especially to the families and friends of those who have died or were injured,” the Queen said, via the statement.

• Prime Minister Justin Trudeau offered his condolences last night: “Canadians are shocked by the news of the horrific attack in Manchester tonight. Please keep the victims & their families in your thoughts,” he tweeted. 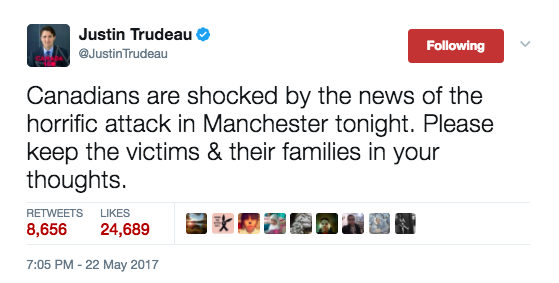 • U.S. President Donald Trump also issued a statement regarding the explosion. “So many young, beautiful, innocent people living and enjoying their lives, murdered by evil losers in life. I won’t call them monsters because they would like that term. They would think that’s a great name. I will call them, from now on, losers, because that’s what they are; they’re losers.”

• Of course, many of the concert attendees were young—some children. One man told Sky News that he and his wife and daughter began to leave the concert slightly early to beat traffic, and walked through the venue’s main entrance on their way out. As they left, they “heard a massive bang” behind them. In the aftermath, he said, “there were young children terrified, crying their eyes out.”

“No nine-year-old girl should see that”: A witness says his daughter is “in bits” after the “worst” day of her life #ManchesterAttack pic.twitter.com/OGNFK8wChj

• More eyewitness accounts detail the chaos that erupted as those in the arena tried to evacuate the building.

“People were just running everywhere. It was total chaos.”

• A homeless man who helped victims following the explosion described to ITV News what he saw.

‘We had to pull nails out of children’s faces’: Steve, a homeless man who was sleeping near #Manchester Arena, rushed to help young victims pic.twitter.com/dyxzZpal0Q

• A vigil will be held this evening between 6pm and 7pm local time at Albert Square in Manchester.

-With files from Associated Press

This article has been updated as new information has arrived.