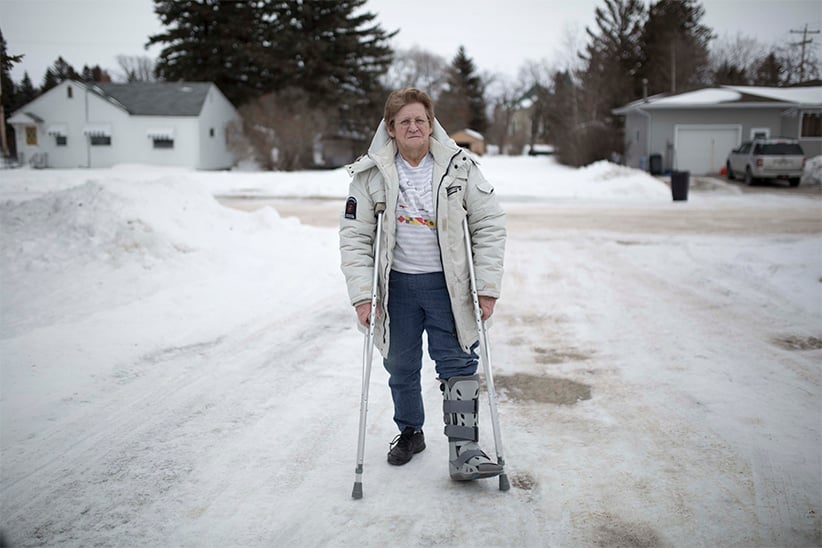 Emerson, Manitoba, local May Boehlig is often the first to help refugees once they cross into Canada. (Photograph by Nick Iwanyshyn)

EMERSON, Man. – An increasing number of people seeking asylum are braving the elements of the open prairie to come into Canada from the United States, says the head of one small community that is calling for federal help to deal with the influx.

Last weekend alone, 22 people crossed the border from North Dakota into Emerson-Franklin, RCMP confirmed Tuesday. Nineteen were put up in a community hall and were supervised and fed by officials and volunteers in the community of some 2,000 residents.

“It’s starting to get overwhelmed here, and now we’re starting to have concerns that we maybe need to have more security or do something different,” said Gred Janzen, the municipality’s reeve.

“We will be sending a bill to (the federal government) because there is a cost to our ratepayers.”

The area has always seen the occasional border jumper, due to the short walk from communities such as Pembina or Noyes in North Dakota to Emerson-Franklin, which sits right on the boundary. But the numbers have increased in recent months and have shot up dramatically in the last couple of weeks following planned new restrictions in the United States on refugees.

Many of the border crossers are from African nations such as Somalia who have been living in the U.S., said Cliff Graydon, who represents the area in the Manitoba legislature. They used to come individually or in groups of two or three, but are now coming in large groups after being driven to areas near the border.

“A number of the people that are refugees are coming from the Minneapolis area, for example. There’s a large core of Somalis there,” Graydon said.

Public Safety Minister Ralph Goodale said Tuesday border crossings in other parts of the country have also seen an increase, but the overall numbers are not as high as they were several years ago.

“The number has risen over the last three or four years, but compared to 10 years ago, the number is substantially down,” Goodale told reporters in Ottawa.

Goodale said he would consider providing more resources to Emerson-Franklin and other areas, but was non-committal.

“We are examining right now what are the appropriate steps to take to protect the integrity of the border, to make sure that public health and safety is properly protected and to make sure that the people involved here are treated in a fair and compassionate way.”

Graydon said an aggravating factor is that the RCMP has cut some positions in the surrounding communities. The Mounties are responsible for patrolling the border outside of official entry points.

Janzen said he is concerned the flow of people coming across the border is going to increase even more once the weather warms up.