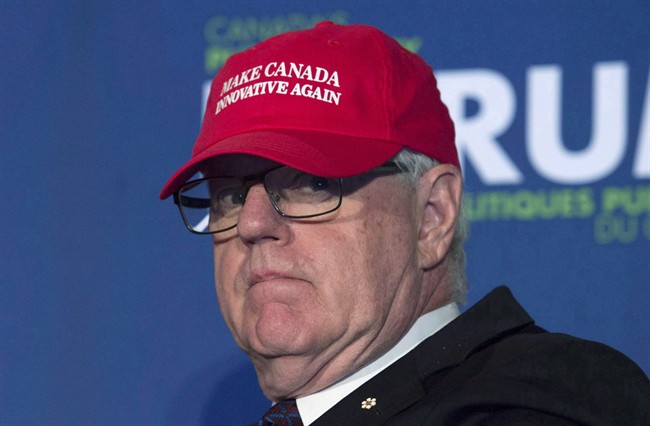 OTTAWA – A former Liberal cabinet minister and leader of a major Canadian business group says Donald Trump’s impending presidency poses an economic threat to Canada that’s on par with the 9/11 attacks on the United States.

John Manley, the president of the Business Council of Canada, is urging the Liberal government to respond to Trump’s anti-trade rhetoric in order to keep goods and people flowing across the busiest border in the world.

“This is existential for Canada. This is the heart that beats (in) our economy so we just can’t get this wrong,” Manley said in an interview Wednesday.

“We have to see it as the same … almost existential threat that 9/11 was.”

Earlier this week, Trump released a YouTube video vowing to withdraw the U.S. from the 12-country Trans-Pacific Partnership.

He was silent on the future of the North American Free Trade Agreement, but has repeatedly called it a disaster that either needs to be scrapped or renegotiated.

Manley, a Liberal cabinet minister during 9/11, says the TPP is now dead and can’t be resurrected, but he says he has urged the government to move quickly to preserve Canada’s trading relationship with the U.S. under NAFTA.

Manley says lessons can be learned from the Smart Border agreement, which he helped broker with then-U.S. homeland security secretary Tom Ridge after 9/11 to improve security without impeding the flow of $2 billion a day in two-way trade.

Manley was the Liberal cabinet minister in charge of Canada-U.S. relations following the attacks of Sept. 11, 2001, which initially halted trade across the 49th parallel amid concerns in Washington that Canada was a launch pad for terrorists.

Manley said it is likely Trump hasn’t given much thought to Canada because he has been preoccupied with the other NAFTA partner, Mexico. He said Canada has to avoid being “sideswiped” by any future action Trump might take against Mexico.

He said it is up to the government to divine what Trump’s plans are for Canada and to propose solutions for any concerns he might have. He said there is a parallel with Canada’s reaction to 9/11.

Manley led an effort to craft the 30-point smart border plan, which Ridge signed on a trip to Ottawa in December 2001. The Canadian side, he said, devised those 30 points and got the Americans to agree.

“It filled an agenda vacuum for them that they were able to sign onto because they clearly needed to deal with risks and security at the border.”

Manley said the government needs to address one potential point of concern: the fact that U.S. corporations have $27 billion in deposits in various Canadian financial institutions.

That’s because Trump has said he wants to find ways to persuade American companies with money parked in foreign countries to return it to the United States. He has dangled tax breaks as an incentive.

“He says he’s going to get that money home. Do the multiplier on what that level of deposits coming out of Canadian financial institutions means to liquidity in Canada,” said Manley.

The death of the TPP diminishes U.S. influence in Asia, which will also have negative effects for Canada, he said.

He said that will allow China to fill the void created by the U.S. departure, allowing them to take the lead on making trade rules in the region.

Not all Canadian business leaders are mourning the death of the TPP or sounding the alarm on NAFTA.

Mathew Wilson, senior vice president of Canadian Manufacturers and Exporters, questioned whether some of the smaller TPP countries in Asia were ever truly interested in “equal trade” with larger TPP economies such as Canada.

Canada needed to guard against “not just opening our doors for an in-flow of goods without getting the ability to access those foreign markets,” he said.