In a surprise announcement, Theresa May says Britons will go to the polls June 8 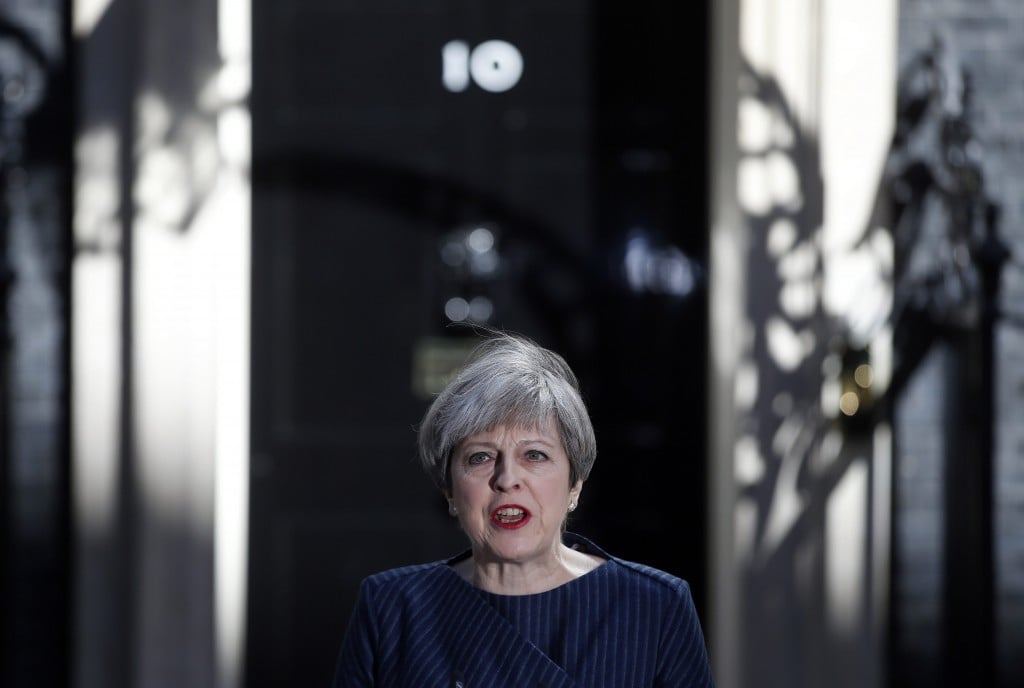 LONDON – In a shock announcement, Prime Minister Theresa May on Tuesday called for an early general election to be held June 8 to seek a strong mandate as she negotiates Britain’s exit from the European Union.

Standing outside 10 Downing Street, May said she would ask the House of Commons on Wednesday to back her call for an election, just two years after the last vote and three years before the next scheduled date in May 2020.

She said that since Britons voted to leave the EU in June, the country had come together, but politicians had not. She said the political divisions “risk our ability to make a success of Brexit.”

At present, May’s governing Conservatives have a small majority, with 330 seats in the 650-seat House of Commons.

With the main opposition Labour Party weakened and divided under left-wing leader Jeremy Corbyn and the pro-EU Liberal Democrats holding just nine Commons seats, May is calculating that the election will bring her an expanded crop of Conservative lawmakers.

That would make it easier for her to ignore opposition calls for a softer EU exit – making compromises to retain some benefits of membership – and to face down hardliners within her own party who want a no-compromise “hard Brexit” that many economists fear could be devastating.

May triggered a two-year countdown to Britain’s exit from the EU last month, and high-stakes negotiations to settle divorce terms and agree on a new relationship are expected to start within weeks.

European Council President Donald Tusk tweeted that he had a “good phone call” with May about the election, and the council said the bloc’s Brexit plans were unchanged by the announcement. Leaders of EU states are due to adopt negotiating guidelines at an April 29 summit, and the bloc will prepare detailed plans for the talks with Britain by late May.

May took office in July following an internal Conservative leadership contest, after predecessor David Cameron stepped down when voters rejected his call to remain in the EU. Since then she had repeatedly ruled out calling an early election to get her own mandate.

But May said Tuesday she had “reluctantly” changed her mind.

“We need a general election and we need one now,” she said.

May said that if there is not an election soon, “the negotiations with the European Union will reach their most difficult stage in the run-up to the next scheduled election.”

“Division in Westminster will risk our ability to make a success of Brexit and it will cause damaging uncertainty and instability to the country,” she said.

May said that “our opponents believe that because the government’s majority is so small, our resolve will weaken and that they can force us to change course” on leaving the EU.

“They are wrong,” she said. “They underestimate our determination to get the job done and I am not prepared to let them endanger the security of millions of working people across the country.”

Under Britain’s Fixed-Term Parliaments Act, elections are held every five years, but the prime minister can call a snap election if two-thirds of lawmakers vote for it.

That is highly likely to happen on Wednesday. Labour Party leader Corbyn said he welcomed May’s decision “to give the British people the chance to vote for a government that will put the interests of the majority first.”

Labour campaigned for Britain to remain in the EU, but Corbyn says he will respect voters’ decision to leave. He said Labour would fight the election promising a fairer society and economy, and “a Brexit that works for all.”

Polls give May’s Conservatives a double-digit lead on Labour. But the election is still a risk for May, and could widen divisions within the United Kingdom. The country voted 52-48 per cent to leave the EU, but Scotland backed remaining by a large majority, and Scottish First Minister Nicola Sturgeon is seeking to hold a referendum on independence from the U.K.

Sturgeon said Tuesday that May was seeking “to crush the voices of people who disagree with her.”

She said it was “all the more important that Scotland is protected from a Tory (Conservative) Party which now sees the chance of grabbing control of government for many years to come and moving the U.K. further to the right – forcing through a hard Brexit and imposing deeper cuts in the process.”

The Scottish National Party currently holds 54 of Scotland’s 59 seats in the British Parliament, making it the third-largest party there.

The pound surged 0.7 per cent against the dollar to $1.2658 after May’s announcement, recovering from a 0.4 per cent drop an hour earlier as rumours swirled about the surprise statement.

Danica Kirka contributed to this story.