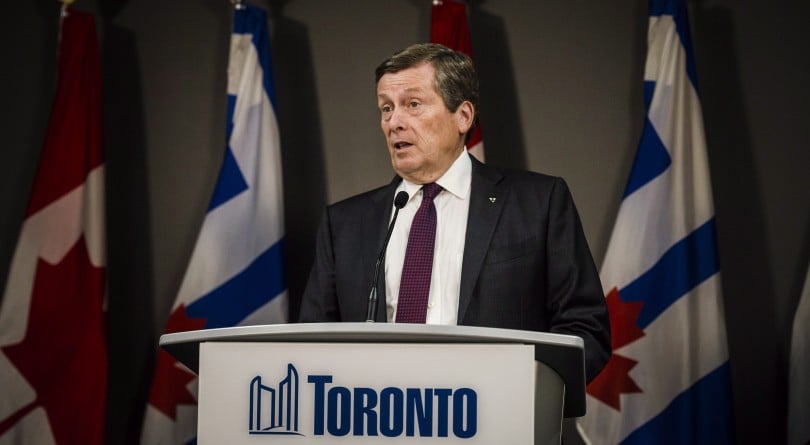 Toronto Mayor John Tory speaks to the media at Toronto city hall on Friday, July 27, 2018. Tory says he's told Ontario Premier Doug Ford that the process around a plan to slash the number of city councillors in half is "absolutely not right." THE CANADIAN PRESS/Christopher Katsarov

Toronto Mayor John Tory has slammed a proposed plan from the Ontario government to slash the number of city councillors dramatically, saying he wants to hold a referendum on the issue.

The Toronto Star reported Thursday night that Premier Doug Ford plans to introduce legislation to cut the number of council seats from 47 to 25.

At a news conference Friday morning, Tory said he will propose a referendum on the issue as part of the Oct. 22 municipal election.

Tory accused Ford of “meddling” with the city’s affairs and said the premier should not be interfering as candidates begin campaigning and fundraising for the October vote.

“What I just can’t support is change being rammed down our throats without a single second of public consultation,” he said. “You don’t change the rules in the middle of the game.”

Ford has scheduled a news conference for Friday morning, just hours before the 2 p.m. deadline to register for the Toronto municipal race.

Such a move would put a damper on the political redemption hopes of Patrick Brown, whom Ford replaced as leader of the Ontario Progressive Conservatives.

Brown, who stepped down as Tory leader in January amid allegations of sexual misconduct that he denies, had thrown his hat into the ring to become the chair of Peel Region.