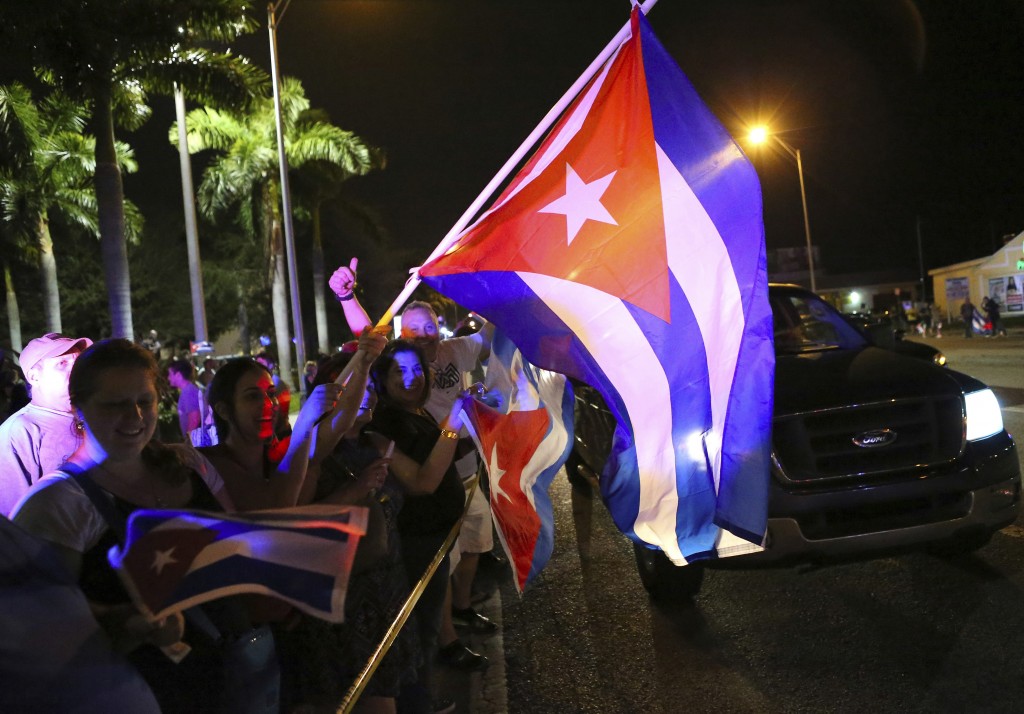 The Cuban community celebrates the announcement that Fidel Castro died as they gather in front La Carreta Restaurant, early Saturday, Nov. 26, 2016, in Miami. Within half an hour of the Cuban governmentÄôs official announcement that former President Fidel Castro had died, Friday, Nov. 25, 2016, at age 90, Miami’s Little Havana teemed with life – and cheers. (David Santiago/El Nuevo Herald via AP)

The death of Cuban leader Fidel Castro prompted celebrations among the country’s exiles in Miami, and expressions of sorrow from some world leaders.

Within half an hour of the Cuban government’s announcement of the death of the 90-year-old revolutionary leader, cheers were heard in Miami’s Little Havana. Thousands of people banged pots, waved Cuban flags and whooped in jubilation. “Cuba si! Castro no!” they chanted, while others screamed “Cuba libre!”

“Been waiting to hear this news all my life. Seems unreal,” Morales said in a text message to an AP reporter.

However, Castro was mourned by some present and former national leaders.

“Fidel Castro in the 20th century did everything possible to destroy the colonial system, to establish co-operative relations,” former Soviet President Mikhail Gorbachev was quoted as telling the Interfax news agency.

“Fidel survived and strengthened the country during the most severe U.S. blockade, while there was enormous pressure on him, and still led his country out of the blockade on the road of independent development.”

Mexican president Enrique Pena Nieto tweeted that “Fidel Castro was a friend of Mexico, promoting bilateral relations based on respect, dialogue and solidarity.”

Peter Hain, a former member of the British Cabinet and anti-apartheid campaigner, tempered praise for Castro with criticism of some aspects of his long rule.

“Although responsible for indefensible human rights and free-speech abuses, Castro created a society of unparalleled access to free health, education and equal opportunity despite an economically throttling USA siege,” Hain said. “His troops inflicted the first defeat on South Africa’s troops in Angola in 1988, a vital turning point in the struggle against apartheid.”

A statement from the Spanish government hailed Castro as “a figure of enormous historical importance.”

“As a son of Spaniards, former president Castro always maintained close relations with Spain and showed great affection for his family and cultural ties. For this reason Spain especially shares the grief of Cuba’s government and authorities,” the government statement said.