Soldiers from Canadian Forces Base Gagetown aid in door-to-door checks, clean up 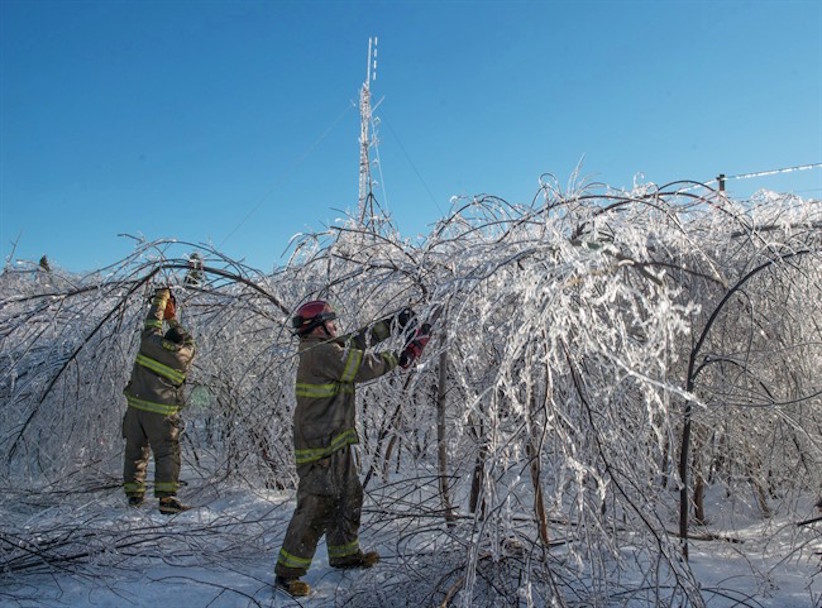 Members of the Baie Sainte Anne Fire Department clear a road so technicians can get to the emergency radio repeater tower to charge the batteries in Escuminac, NB. on Sunday, Jan. 29, 2017. THE CANADIAN PRESS/Diane Doiron

The soldiers cleaned debris from streets, went door-to-door to check on residents, and delivered needed items as the region recovers from a storm that has now prompted a delay in the provincial budget.

“They are making some significant gains in very difficult conditions … But we understand there are people going through a tough time,” Premier Brian Gallant told a briefing Monday. The budget scheduled for Tuesday is now delayed until Feb. 7.

Early in the day, dark green military vehicles from Canadian Forces Base Gagetown crossed a bridge onto Lameque island, where soldiers set up a base in a school and then fanned out to ice-coated communities where power crews are still attempting to restore electricity lost in Wednesday’s storm.

Major Turmel Chiasson said the units have trained extensively for disaster scenarios, but for many of the younger soldiers it’s their first real-life experience responding to an ice storm.

“(They’re) very eager … they train a lot and they don’t do it for real, and this gets them involved in the community,” he said.

“For myself, I’m from here, the area, so yes, very excited to be here and helping friends and family.”

“A lot of friends were able to get on social media, and I was able to see the damage from the storms, so I was well in the know. Especially my mother, with no electricity for awhile, living in one of the worst areas.”

Gallant said the number of people without electricity has fallen from 150,000 last Wednesday, to less than 20,000 by noon Monday, and it was expected that with 380 repair crews on the ground that the majority of customers will have power restored by the end of the day.

“There are some families that will have a few days without power,” Gallant said.

Meanwhile, hospitals continued to assist people who succumbed to carbon monoxide fumes as some residents resorted to generators or barbecues to supply power and heat.

As of Sunday evening, 33 people had been treated for exposure to the gas.

In the small community of St. Leolin on the Acadian Peninsula, Mayor Mathieu Chayer said the community of about 700 people has its power back, but is grieving the loss of an elderly resident.

He said many people in the town knew 74-year-old Lorraine Clement, who RCMP said passed away on Thursday as a generator was in her garage.

Investigators have said an autopsy has yet to be carried out in her death, or in the death of a 62-year-old man who investigators say died at his home in Petite Riviere de l’ile on Lameque Island as a generator was running.

Chayer said the incidents leave a lasting impact on the small, close-knit Acadian towns, which haven’t seen an ice storm this severe for decades.

“Everybody’s feeling sorrow about it … She has family in the town,” he said.

The mayor said an emergency shelter was open in his town on Wednesday, hours after the storm hit, and that volunteer firefighters went door-to-door in an effort to check on older residents.

Chayer, a paramedic, said the deaths and hospitalizations have alerted residents in the region to the risks of running generators in enclosed spaces.

“I don’t think most of the people before this realized how deadly carbon monoxide is and how quickly it can kill somebody,” he said.

During his news conference, Gallant said he heard from doctors that many of the poisoning victims were operating generators in garages with the door open, not realizing that doesn’t provide sufficient ventilation.

“People will put things that emit carbon monoxide in garages thinking that if they open the door everything will be OK, but there is still the potential based on air flows of the emissions still going into their homes,” said the premier.

— By Adam Hodnett in Lameque and Michael Tutton in Halifax.