It appears the 33-year-old man shot himself, authorities say 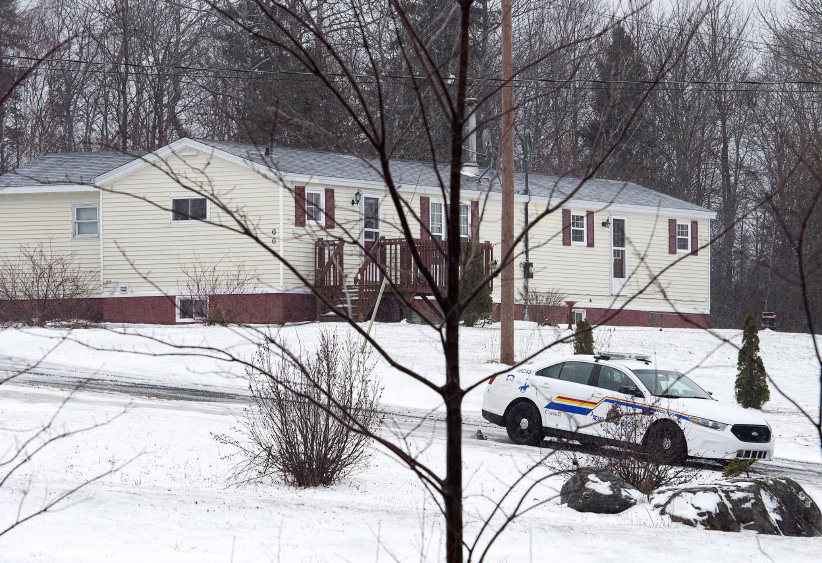 A police vehicle outside a residence in Upper Big Tracadie, N.S. on Wednesday, Jan. 4, 2017. RCMP said four bodies were found inside the home in northeastern Nova Scotia. (Andrew Vaughan/CP)

UPPER BIG TRACADIE, N.S. — An Afghanistan war veteran and his wife, mother and young daughter have been found shot to death in a home in rural Nova Scotia.

RCMP said Wednesday it appeared a 33-year-old man shot himself, and that three females, aged 52, 31 and 10, also died of apparent gunshot wounds. The bodies were found at about 6 p.m. Tuesday in Upper Big Tracadie.

“The male’s gunshot wounds appear to be self-inflicted. There were no signs of forced entry into the residence,” police said in a release.

A National Defence source identified the husband as retired corporal Lionel Desmond, 33, who served with the Second Battalion of the Royal Canadian Regiment in CFB Gagetown, N.B., and who family members said suffered from PTSD.

The other victims were his wife Shanna Desmond, 31, their 10-year-old daughter Aaliyah and his mother Brenda Desmond, 52.

Two guns were found at the scene, RCMP said. They would not confirm outright the deaths were a murder-suicide, saying the investigation is continuing.

The military source, who spoke on condition of anonymity because he was discussing information not yet made public, said Desmond did one tour in Afghanistan in 2007, and was released in July 2015.

He had received treatment from the joint personnel support unit (JPSU) at Gagetown for a year prior to release, the source said. The JPSU is the unit that provides support to ill and injured soldiers, including mental injuries such as PTSD.

Catherine Hartling, a neighbour and Shanna’s aunt, said Lionel Desmond trained as a sniper and was diagnosed with PTSD after returning home from Afghanistan.

“He was bad then. They tried to get him help,” Hartling said. “They sent him up to Montreal, and they sent him back and put him on medication.”

Another relative, Rev. Elaine Walcott, said Lionel Desmond had recently tried to check himself into a mental health unit at St. Martha’s Regional Hospital in nearby Antigonish and was told there were no beds.

“Lionel loved his mother, his family, and he was a victim of post-traumatic stress disorder and the memories he didn’t want to have,” said Walcott. “He was troubled.”

Hartling said Desmond and Shanna went to high school together at nearby Guysborough Academy, and he joined the military after graduating. Shanna Desmond was a nurse at St. Martha’s.

Hartling said she was convinced the post-traumatic stress disorder was behind the deaths.

“He seemed sometimes normal, but he could fly off and get upset, swear and go on and on,” she said.

He didn’t get the care he needed, Hartling said.

“It’s hard when you send someone home to live in a community after what they’ve seen and been through …. It has to stop. I hope they do an inquiry into this,” she said.

The provincial medical examiner’s office would not comment on the possibility of an inquest into the deaths.

Aaliyah had just turned 10 three days after Christmas, and had begun horseback riding. She wanted to be a veterinarian, Hartling said. Tuesday was the girl’s first day back in her Grade 5 class after the holidays.

Deanna Gillis, a spokeswoman for the Strait Regional School Board, said the 10-year-old girl was a student at Chedabucto Education Centre-Guysborough Academy in Guysborough, N.S.

Gillis said counselling services would be available to students and staff at the primary to Grade 12 school beginning Thursday for as long as needed.

“There is a huge sense of loss in our community,” said Gillis, adding that she doesn’t recall anything like this happening before in the rural community roughly 275 kilometres northeast of Halifax. “We’re deeply saddened by this heartbreaking loss.”

Hartling said she got a call Tuesday evening that “someone was dead on the floor” in the house, which is directly across the street from her small home.

The man’s sister and her boyfriend were already there when she went over, she said.

“He came out and he said, ‘It’s not pretty in there’.” The boyfriend said he had called 911 and was told not to let anyone in.

Deputy warden Sheila Pelly of the Municipality of the District of Guysborough said the deaths have stunned the community, adding that she knew the people but did not want to comment.

“Everybody’s in shock,” she said. “They can’t believe it.”

Madonna Boucher, who lives down the road on Highway 16, said she heard police vehicles racing to the area Tuesday evening, but didn’t know what was happening.

“It’s sad, really sad,” she said. “It’s crazy — I’ve never experienced anything around here like that.”

Police said there was no risk to the public.

— With files from Lee Berthiaume in Ottawa and Aly Thomson in Halifax.