Dean Lapierre says he 'screwed up' on personal Facebook page 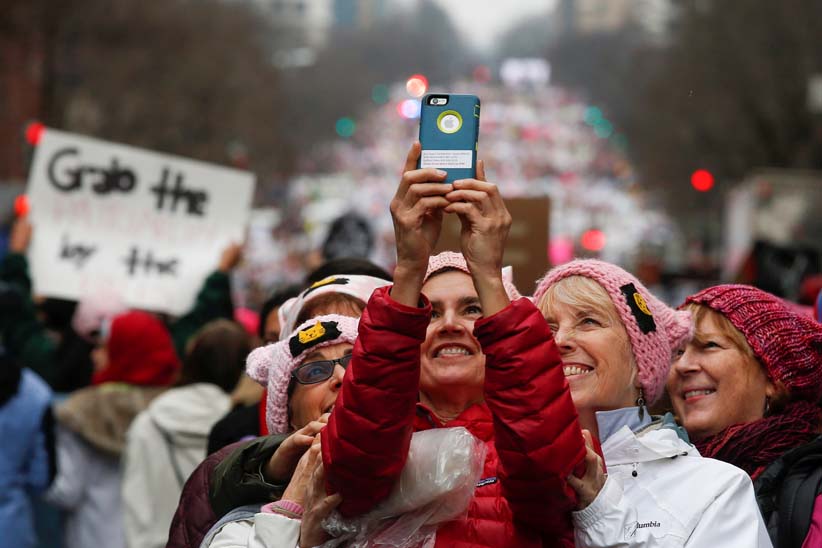 Women take a selfie as they take part in the Women’s March, in opposition to the agenda and rhetoric of President Donald Trump, in Washington, D.C., U.S. on January 21, 2017. (Adrees Latif/Reuters)

An Ontario minor hockey executive has apologized for a slur aimed at Canadian women who travelled to Washington, D.C., over the weekend to join a massive march against U.S. President Donald Trump.

“I should have used better judgement,” Lapierre told The Canadian Press.

Last week, Lapierre wrote on Facebook: “Any of those CANADIAN women who wanted to protest the President of the USA and got turned around. Good u dumb bitches. Worry about your own Country CANADA. And your protesting what?”

Lapierre said he’s since deleted the post and is also taking down other comments on his personal page “that people might find offensive.”

The Ontario Minor Hockey Association said it is investigating the incident.

“These comments are offensive and have no place in minor hockey,” said Ian Taylor, executive director of the OMHA.

“We aim to teach our players the value of respect and acceptance of all members of our communities. Although this was posted on Dean’s personal page, we believe he holds a prominent position and has a public profile within the community.”

Lapierre agreed and said he was frustrated that Canadian women would travel to another country to join a political rally.

Hundreds of Canadian women from Toronto, Montreal, Ottawa and Windsor, Ont., took part Saturday in the protest dubbed “Women’s March on Washington” in support of women’s rights. Many others made their way to the U.S. capital by car or plane.