The MMIW inquiry comes out in the open—literally

By design and benign fortune, organizers in Whitehorse have created an 'organic and authentic' space for inquiry participants 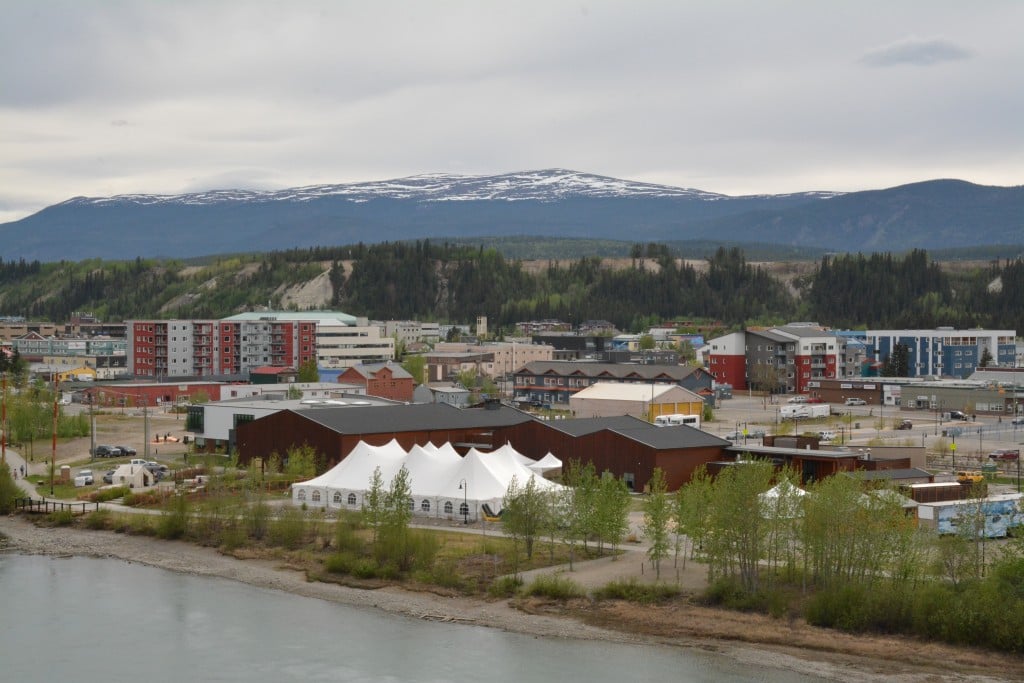 A tent at the Kwanlin Dun Cultural Centre in Whitehorse serves as the venue of the public hearings of the National Inquiry into Missing and Murdered Indigenous Women and Girls between May 29 and June 1 (Meagan Campbell).

Blankets will enwrap the commissioners. The chief will wear a star-embroidered quilt; other commissioners will have coverings from Costco, and the curtains will hang with more bedding. The blankets aren’t just for emotional comfort but also for physical warmth, as hearings—of families of the missing and murdered Indigenous women and girls—won’t happen in a courtroom but in a tent. As the most public part of the inquiry, proceedings won’t just be open-door; rather, they’ll be outdoor.

“It’s this authentic, organic space,” says Jorgina Zeegers, whose mother died of suspected murder in Saskatoon, and who helped make blankets. Zeegers is the special advisor to Marilyn Poitras, one of five commissioners who will hear testimony between May 30 and June 1 in Whitehorse. Comfort is the top priority. Family members won’t take the stand, but rather take a seat in a truth-telling circle, eye-level to the commissioners and their legal counsel. No speaker will need to “take the floor,” because there is no floor—only planks of wood.

“We have to get this right,” says Zeegers. The tent has been erected in the backyard of the Kwanlin Dun Cultural Centre. The indoor space was booked up with two conferences (on justice and opioids), and the next venue option, at Yukon College, was deemed structurally at-risk to earthquakes. Since the tents were to be set up for a high-school graduation next weekend, anyway, the National Inquiry into Missing and Murdered Indigenous Women and Girls requested raising the shelter early. Zeegers considers this series of events a blessing. “Obviously the Creator wanted it this way,” she says. “If you were to define an Indigenous person, it’s a protector of the land.”

RELATED: Canada’s MMIW inquiry is falling apart before it begins

With no roof, hopes are high. “It’s more homey,” says Helen Charlie, who was asked to testify about her 28-year-old sister’s murder in 1985. Charlie will decide if she’ll speak based on how safe she feels in the hearing. The space is cozy, with curtains shielding the families from the public part of the tent, where it will be broadcast live. In the centre of the circle, a fire called a Kudlik will burn seal blubber or whale oil (which might have the added benefit of deterring mosquitoes). Screens will display photographic evidence, but until then, the desktop background is a koala. 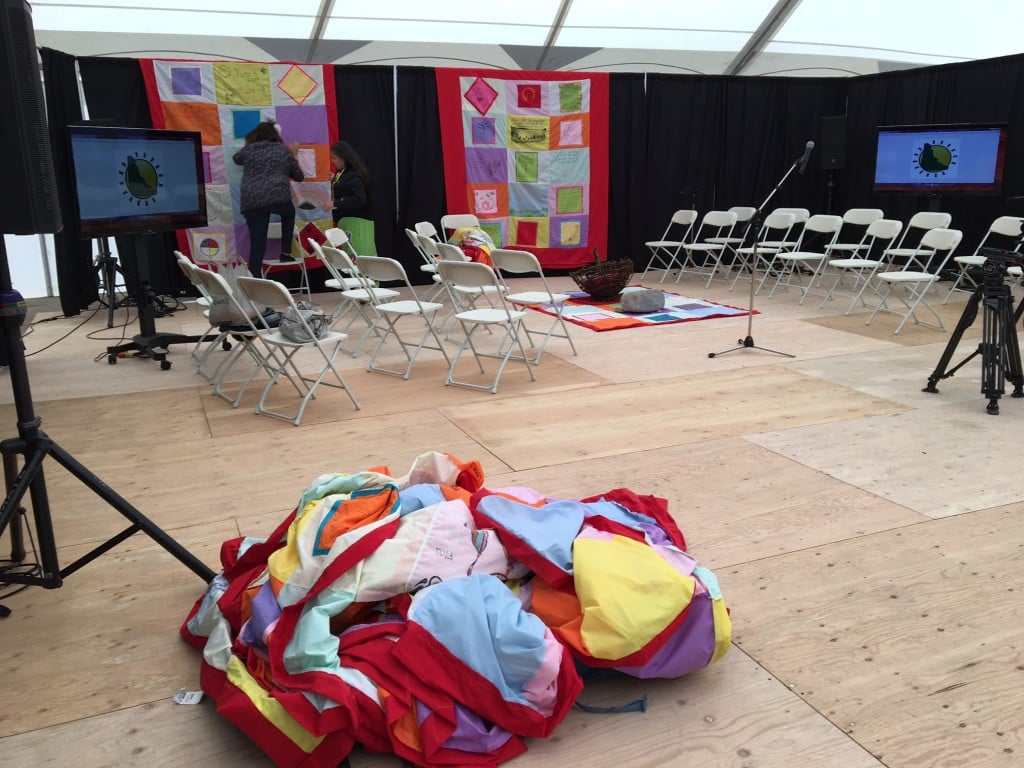 Staff of the National Inquiry put up handmade quilts around the space where the public hearings will take place (Meagan Campbell).

Despite the welcoming aura, the event demands tight security and privacy. Activists have criticized the inquiry for not accepting testimony from some families, who could show up uninvited. Since the venue is outdoors, a security guard patrols the grounds all night to ensure nobody steals tech equipment, or lounges in the smaller tent containing couches for elders. The media aren’t allowed to attend the opening remarks of the commissioners, and are barred from areas surrounding private testimony booths. At the ceremonial fire pit, where a flame will perpetually burn this week, journalists must close their notebooks and lens caps.

An advisory group of grandmothers suggested getting the blankets for the hearings. Inquiry staff collected quilt designs from women at a federal prison, two women’s shelters and a half-way house in Saskatoon. The patches bear promises like, “I loved you once, I love you still, I always have, I always will.”

Zeegers helped sew the blankets for four days in the inquiry’s office in Saskatoon. She learned to sew about 15 years ago, while in a violent relationship, when she worked in a factory making coveralls for oilfield workers. Though she’s nearly forgotten her seamstress skills, she remembers the abuse, and how, when her mother’s body was found beneath a bridge, the police concluded it was a suicide even though her family believes she was thrown over. The death led Zeegers into foster homes and addictions. The case is cold and won’t be reopened. At age 40, Zeegers accepts the mystery yet feels frustrated. She says she always will.