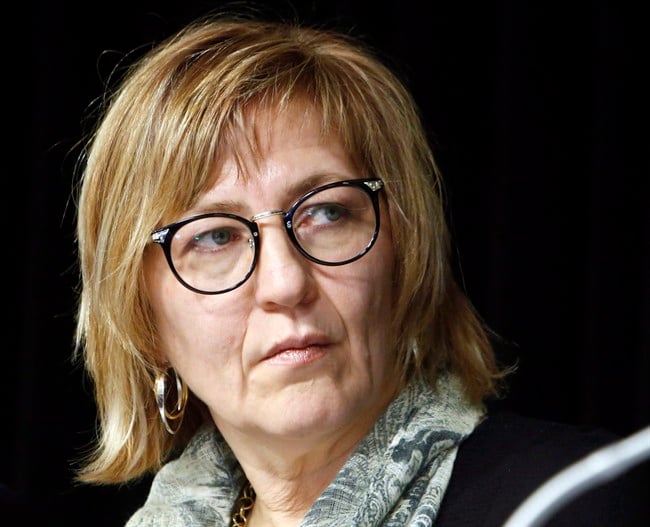 Marilyn Poitras, one of the commissioners of the National Inquiry into Missing and Murdered Indigenous Women and Girls, takes part in a news conference in Ottawa on Tuesday, February 7, 2017. THE CANADIAN PRESS/Fred Chartrand

OTTAWA – A commissioner has resigned from the inquiry into missing and murdered Indigenous women.

Poitras was named last summer to the highly-anticipated inquiry along with four others.

She has worked as an assistant professor at the University of Saskatchewan since 2009.

The departure adds to a rocky path the inquiry has walked for months as it tries to tackle a massive mandate set for it by the Trudeau Liberals.

The commission has faced critiques from families frustrated at the pace of consultations and communications. Four staffers have resigned in recent months.

Indigenous Affairs Minister Carolyn Bennett is scheduled to meet with reporters on Parliament Hill this morning to address the resignation.

Last week, the chief commissioner defended the inquiry’s work, saying it has built a process from scratch with a tight deadline to file its final report.

“Things are not drifting. We have to put this in the right context. We started on Sept. 1, four commissioners and myself and a piece of paper, our terms of reference. In eight months, we hired staff, we opened offices, we put life to our terms of reference and we held our first hearing,” Marion Buller said.

“In my view, that’s lightning speed.”

Buller also said she would not step down despite calls for a complete reset on the inquiry process.

The federal government gave the commissioners a budget of about $53.9 million and asked them to complete their work by the end of 2018, with an interim report expected this November.

Buller has already indicated more time and funding will be required.