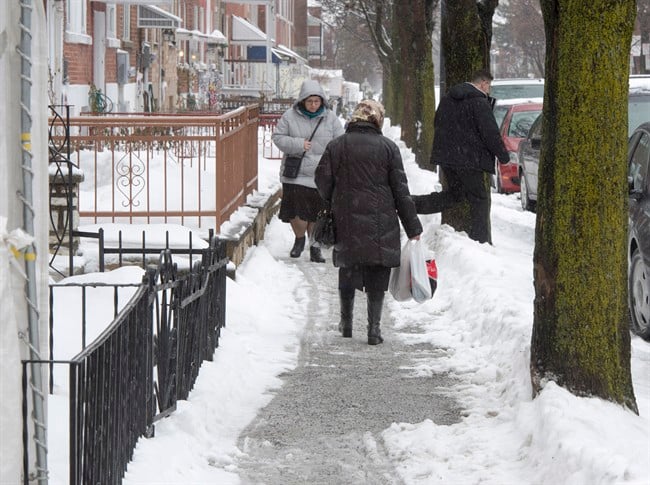 What if icy sidewalks became a thing of the past? THE CANADIAN PRESS/Ryan Remiorz

MONTREAL – A bout of freezing rain that recently swept across Eastern Canada had some Montrealers reaching for skates and sent many a pedestrian crashing to the ground.

But what if icy, snow-covered sidewalks could be a thing of the past?

Since announcing the project in 2015, Montreal has been slowly moving ahead with a plan to install heated sidewalks on one of its key downtown arteries.

According to the plan, a snaking network of garden-hose-sized tubes will circulate a mixture of water and glycol, warmed by an electric heater, under a 670-metre stretch of Ste-Catherine Street.

At 3 C, the pavement will be kept warm enough to prevent snow from accumulating, thus saving the need for much of the plowing and salting now used to keep sidewalks clear.

“(Heated sidewalks) will accentuate the commercial attraction of the city in the winter by allowing pedestrians and shoppers to walk on sidewalks that are clear most of the time,” said city spokeswoman Genevieve Dube.

“Accessibility will be improved by this fact, and damage to city property and trees will be reduced because there will be fewer snow-clearing operations.”

Construction is set to begin in 2018, while a second phase two years later would expand the heated surface to 2.2 kilometres.

While it may seem like a pipe dream, warmed walkways are not uncommon in the rest of the world.

The volcanic city of Reykjavik heats its streets through geothermal energy, while cities such as Sapporo and Oslo use electric heat.

But despite their northern climates, big Canadian cities are behind the curve when it comes to keeping citizens’ feet warm.

Saskatoon has included heated sidewalks in its medium-term plans to redevelop its city centre, but officials are not pursuing it actively at present, according to planning director Lesley Anderson. Other projects in Canada are small scale, limited to hospitals, private driveways and short commercial stretches.

Cost is certainly a factor. While Montreal hasn’t finalized the budget for the project, preliminary estimates for phase one are around $26 million, Dube said.

But while the price seems astronomical, heated sidewalks could pay off in the long run, according to Francois Racine, an urban studies professor at Universite du Quebec a Montreal.

He said snow-removal operations and roadway salt are expensive and damage both the environment and the pavement.

A warming climate means precipitation is more likely to fall as freezing rain, which is harder for city crews to clear quickly by traditional means.

Then there’s the benefit of getting people outside in winter, and of money saved in emergency-room visits from pedestrians who fall.

“People think this is a luxury, but there are a lot of public benefits in the long term,” Racine said.

But although he’s generally in favour, Racine said he has some concerns about the city’s choice of technology.

Shoddy work or the wrong choice of materials could lead to problems such as salt and water seeping through and corroding the wires that provide the heat, he noted.

At least one nearby American city has had a similar system in place since 1988 that appears to be working well.

Montreal’s research included a visit to Holland, Mich., which uses heat from a power plant to warm the water that runs under the streets.

Their “snowmelt” system can melt about 2.5 centimetres of snow per hour at temperatures as low as -9 C, according to the city’s website.

Sally Laukitis of the city’s tourism department said the system has been “a great marketing tool” that has boosted business in the city’s downtown core.

The city now hosts several winter festivals, and the system has been so successful it was recently expanded another six blocks, she wrote in an email.

It’s something many Montrealers may be envying after the recent ice storm, which prompted the province’s medical emergency services to ask people to stay home after receiving what it called a “historic” number of calls.

One Montrealer, 25-year-old photographer Simon Lachapelle, posted a video to his YouTube channel that showed him gracefully skating down the streets of his Rosemont neighbourhood.

Lachapelle said that given the costs of heated sidewalks, he’d prefer sticking to blades.

“It must cost so much,” he said. “I would prefer to skate my way to work instead and use the money elsewhere.”