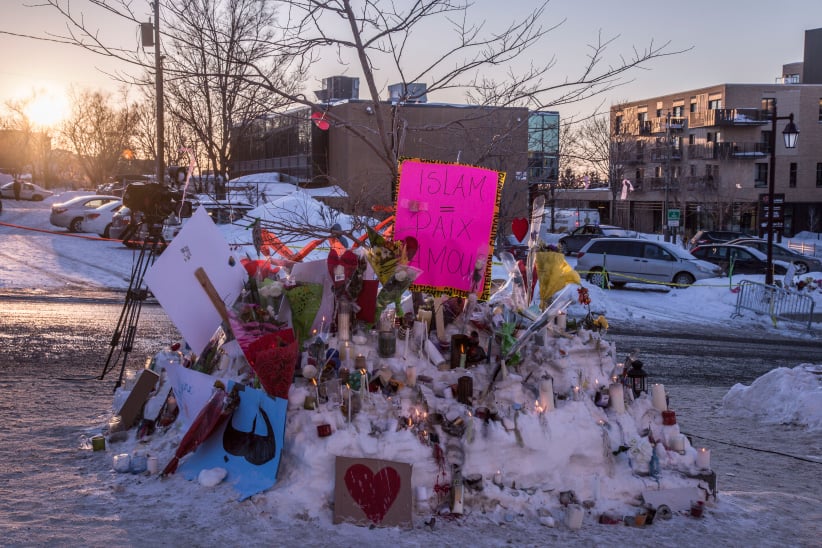 Throughout the second day after the late-night shooting at the Mosque in Quebec city, people continued to add flowers and notes and other objects as memorials for the victims on snowbanks around the perimiter of the mosque. (Photograph by Roger LeMoyne)

MONTREAL — After Quebec’s mosque shooting, an internationally acclaimed philosopher who heavily influenced the province’s debate on secularism said Tuesday he no longer thinks it’s a good idea to ban people from wearing hijabs on the job.

“The time when the majority in our society can act without regard for marginalized minorities is over,” he wrote.

The 2008 report he co-authored with historian Gerard Bouchard on the accommodation of religious minorities was a precursor to the contentious secularism charter introduced by the Parti Québécois in 2013.

In the report, the two men recommended state employees in “coercive” positions, such as judges, Crown prosecutors and prison guards, should be prohibited from wearing conspicuous religious symbols on the job.

Its recommendations were broadly interpreted by the then-governing PQ, who introduced a charter that sought to ban all employees of the state, including doctors and teachers, from wearing religious symbols at work.

The Liberals have long rejected such clothing bans.

As a response to public and political pressure, the government recently introduced a bill that requires anyone giving or receiving services from the state to do so with their face uncovered.

Taylor’s report has repeatedly been used by the PQ and members of the Coalition for Quebec’s Future — as recently as last week — to criticize the Liberals for not going far enough.

Taylor said his 2008 report was written in a particular context, which has changed.

“I am thinking particularly to the debate about ‘Quebec values’ (in 2013),” he wrote. “There were multiple incidents of aggression, particularly towards Muslims wearing the veil.

“In the past few weeks, we witnessed a horrible shooting, but also an outpouring of solidarity and mutual understanding from the community,” he continued. “I think we cannot afford to take new steps that could renew this effect of stigmatization.”

A 27-year-old man has been charged after he allegedly entered a Quebec City mosque in late January and murdered six men.

Premier Philippe Couillard said Taylor’s change of position demonstrates “that when we have principles we must stick to them.”

“It starts with the police,” Couillard said about clothing bans. “Then it goes to teachers, and then we’ll get to the beaches,” he said, referencing the so-called burkini ban in France.

“If we want to avoid giving Quebec a black eye internationally, these are things we need to avoid doing.”

Coalition leader François Legault said that while Couillard is sticking to his principles, the premier is asking Quebecers to bend theirs.

“Mr. Taylor, he can think what he wants,” Legault said. “But Quebecers haven’t changed their minds.”