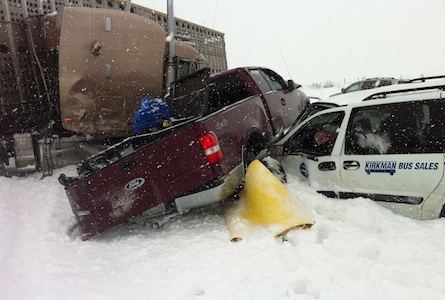 A blizzard that has been blasting through the Prairies is blamed for a multi-vehicle crash south of Edmonton that has injured about 100  people.

Sharman Hnatiuk with Alberta Health Services says four people were seriously hurt and the others suffered minor to moderate injuries.

Many were being taken to hospitals in 10 surrounding communities, including Edmonton and Red Deer, she said Thursday.

“Some of those patients are being transported by buses.”

STARS air ambulance had to turn down requests to ferry patients because of the bad weather, said spokesman Cam Heke. Helicopters simply couldn’t get in the air.

RCMP closed a portion of Highway 2 — the main road between Edmonton and Calgary — and were redirecting traffic away from the collision scene, said Staff Sgt. Grant MacDonald with the Wetaskiwin detachment.

He said the crash, which involved several vehicles, including a large passenger bus and several semi-trucks, happened just before lunch.

A bus passenger tweeted a photo of what he called a massive pileup, but he added that everyone on the bus was all right.

“Hitchhiking my way to Edmonton via Wetaskwin on country roads,” Derek Fildebrandt wrote in another tweet. “Found a Tim Hortons. There is a God.”

Snowfall warnings were in effect with as much as 15 centimetres expected in some areas.

Police said numerous motorists were stranded on Highway 17 north of Lloydminster on the Alberta-Saskatchewan boundary.

Traffic in both directions was at a standstill because of a snowdrift 100 metres long and more than half a metre deep.

Highway crews were attempting to remove the drift, but it’s expected that blowing snow would just drift over the road again.

UPDATE: Sharman Hnatiuk with Alberta Health Services initially said about 300 people were hurt, but she has revised that number downward to 100. She says only one person has been seriously injured and the others suffered minor to moderate injuries. Many have been treated on Greyhound buses and others have been taken to area hospitals.RCMP have closed a portion of Highway 2 — the main road between Edmonton and Calgary — and have been redirecting traffic away from the collision scene.