My first dose was Pfizer. Why am I being offered Moderna for the second? 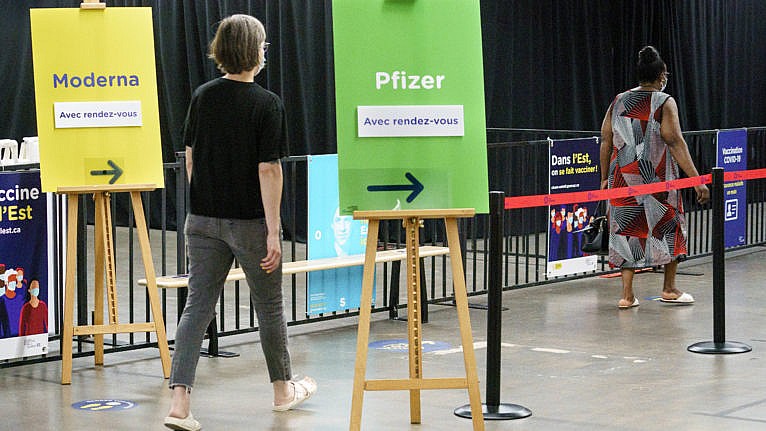 A woman arrives at a COVID-19 vaccination clinic in Montreal, on Monday, June 21, 2021. THE CANADIAN PRESS/Paul Chiasson

Vaccine records are tumbling almost daily. On June 18, 532,000 shots were put into arms in Canada, according to data collected by COVID-19 Tracker Canada. Ontario was averaging 175,000 doses a day at the beginning of last week; as of June 21, that had climbed to 190,000 doses a day as another 2.3 million people in the province became eligible for second doses, according to data requested by Maclean’s from the Ministry of Health. On Sunday, June 27, Toronto is marking Vaccine Day by opening a huge clinic at Scotiabank Arena, home to the Maple Leafs and Raptors. The aim: to set a one-day record for the most shots administered at one clinic. And most of those doses will be Moderna.

Because of a hiccup in the delivery of Pfizer doses—this week’s shipment of 2.4 million doses is delayed until the middle of the week—the city, like many other jurisdictions, is reserving its Pfizer supplies to youths ages 12 to 17, as it is the only approved vaccine for that age cohort.

Health experts and authorities across the country have approved Moderna as a second dose if your first was AstraZeneca or Pfizer. Last week, the National Advisory Committee on Immunization (NACI) updated its second dose guidance: for those who first received AstraZeneca, it recommends getting a mRNA vaccine (Pfizer or Moderna) as the second dose because of the continued risk of rare blood clots with AstraZeneca as well as “emerging evidence suggesting better immune responses” from mixing and matching with a second dose of mRNA.

RELATED: Fully vaccinated people have gotten the Delta COVID variant. Should we be worried?

At the same time, NACI reiterated its second dose recommendation for those whose first shot was a mRNA vaccine: “If the same product is not readily available, or the product used for the first dose is unknown, another mRNA vaccine is considered interchangeable and should be used to complete the series.”

In the past few days, experts have explained to any hesitant second-dosers that Moderna and Pfizer are virtually indistinguishable and have similar efficacy against COVID-19 (in fact, one dose of Moderna is more effective at preventing infection than a single dose of Pfizer). “Both Pfizer and Moderna are mRNA vaccines. They’re not identical but extremely similar and it’s perfectly okay to get one dose of each,” explained Dr. Deena Hinshaw, Alberta’s chief medical officer of health. The Manitoba government site concurred: Adults are “reminded that they do not need to wait for a Pfizer for second-dose appointments, and may get Moderna if it is available to them earlier. Pfizer and Moderna are both safe, effective and interchangeable.”

By the end of June, Canada is expected to have received a cumulative total of more than 50 million doses since the first shipment arrived in December, including:

RELATED: These happy data warriors do a better job charting the pandemic than your government

The federal government has announced that another 9.1 million Pfizer and 6.6 million Moderna doses will arrive in July, pushing the cumulative total as of July 31 to more than 68 million doses. This means there will be more than enough to fully vaccinate all eligible Canadians (around 32 million people in Canada are 12 and older).

Meanwhile, demand for second doses is surging. Like Ontario and other provinces, Manitoba is increasing eligibility. As of today, anyone who got a first dose on or before May 25 can get a second shot. On Tuesday, that expands to those who were vaccinated on or before May 29.

“If you keep giving the provinces more doses, they just speed up more,” says Kevin Wilson, a Halifax-based epidemiologist who has spent the past few months analyzing the vaccine distribution and administration system in Canada. “No one is sitting on a mountain of vaccines wondering how to get rid of them.” Vaccines end up in arms within a week or two of arriving in a given province or territory, says Wilson, depending on the delivery cycle. To him the big story of the vaccine rollout is also the simplest: “When they get the doses, they use them.”