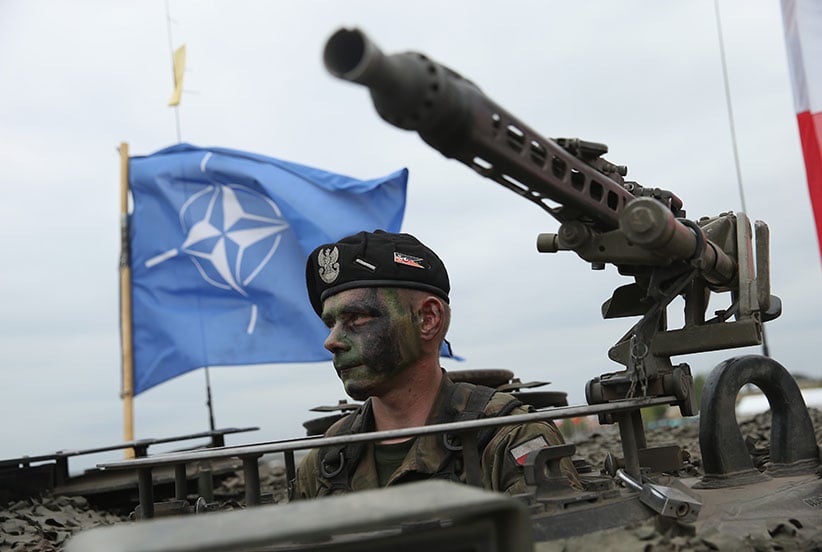 A soldier of the Polish Army sits in a tank as a NATO flag flies behind during the NATO Noble Jump military exercises of the VJTF forces on June 18, 2015 in Zagan, Poland. (Sean Gallup/Getty Images)

BRUSSELS – The North Atlantic Treaty Organization is lending its support to the U.S.-led coalition against the group calling itself the Islamic State of Iraq and the Levant.

“NATO joining the coalition to defeat (ISIL) is a strong political message of unity in the fight against terrorism,” Sec.-Gen. Jens Stoltenberg said Thursday.

The decision came as NATO leaders are gathering in Brussels to discuss how they can better share the cost of defence and co-ordinate efforts in the fight against terrorism, which was once again thrust into the spotlight after the deadly attack on a concert arena in Manchester, England this week.

Those are the main items on the agenda, but the main motivation behind this ad hoc meeting is to introduce U.S. President Donald Trump to NATO – a military alliance he once called “obsolete” – and convince him it is still relevant today.

All 28 NATO allies, including Canada, are already part of the anti-ISIL coalition, and the military alliance has been involved in training Iraqi forces.

Still, Trump had been urging the alliance to take on a bigger role.

Stoltenberg said that by formally joining the coalition, NATO will be better able to co-ordinate its efforts there, but it does not mean it will be involved in combat operations.

It will mean practical support, such as more flying hours for its fleet of its surveillance aircraft, information-sharing and air-to-air refuelling.

NATO will also set up a new terrorism intelligence cell at its headquarters in Brussels, which will include getting better at sharing intelligence on foreign fighters, and appoint a special co-ordinator to oversee the counter-terrorism efforts.

Trump has also been vocal about his demand for the other members of NATO to pick up their fair share of the tab when it comes to defence spending, which is where things could get uncomfortable for Prime Minister Justin Trudeau.

Canada spends just over one per cent of its GDP on defence, which is just half of NATO’s target and puts the country among the bottom third of allies.

The Liberal government has argued that its contribution is bigger than the numbers suggest, pointing to its commitment to send up to 455 troops to head up a multinational mission in Latvia, as part of efforts to curb Russian aggression in the Baltics, as another way to contribute.

There seemed to be some support for that notion from Stoltenberg.

“This is not just about cash, but also modern capabilities and meaningful contributions to NATO’s missions, operations and engagements,” Stoltenberg said Thursday.

“Today, we will take steps to keep up the momentum,” adding that NATO members will agree to come up with annual national plans to help them meet the target.

There has been much speculation about the role that Russia will play in the talks, especially given explosive allegations and domestic U.S. investigations of close ties between the White House and Russia.

Eastern European partners are concerned with Russian aggression and there are also growing concerns around the relationship between Turkey and Moscow, and their roles in the Syrian conflict.

Stoltenberg, though, tied the issue of Russia to the one of burden-sharing, which is top of mind for Trump.

“One of the reasons why we are investing in our collective defence, why we are increasing our presence in the eastern part of the alliance, is of course as a response to the aggressive actions of Russia we have seen in the Ukraine,” Stoltenberg said.

Stoltenberg also said that NATO will assess its “level of support and the future of the mission” in Afghanistan, where the alliance currently has 13,000 troops involved in training.

“Our aim is to train the Afghan forces to enable them to step up their efforts in stabilizing their own country, countering Taliban but also fighting different terrorist groups in Afghanistan, including (ISIL),” Stoltenberg said.

Stoltenberg said NATO will decide on exact troop levels later this year, but will not return to a combat operation in Afghanistan.