5 at 5: More details about the Calgary stabbing victims 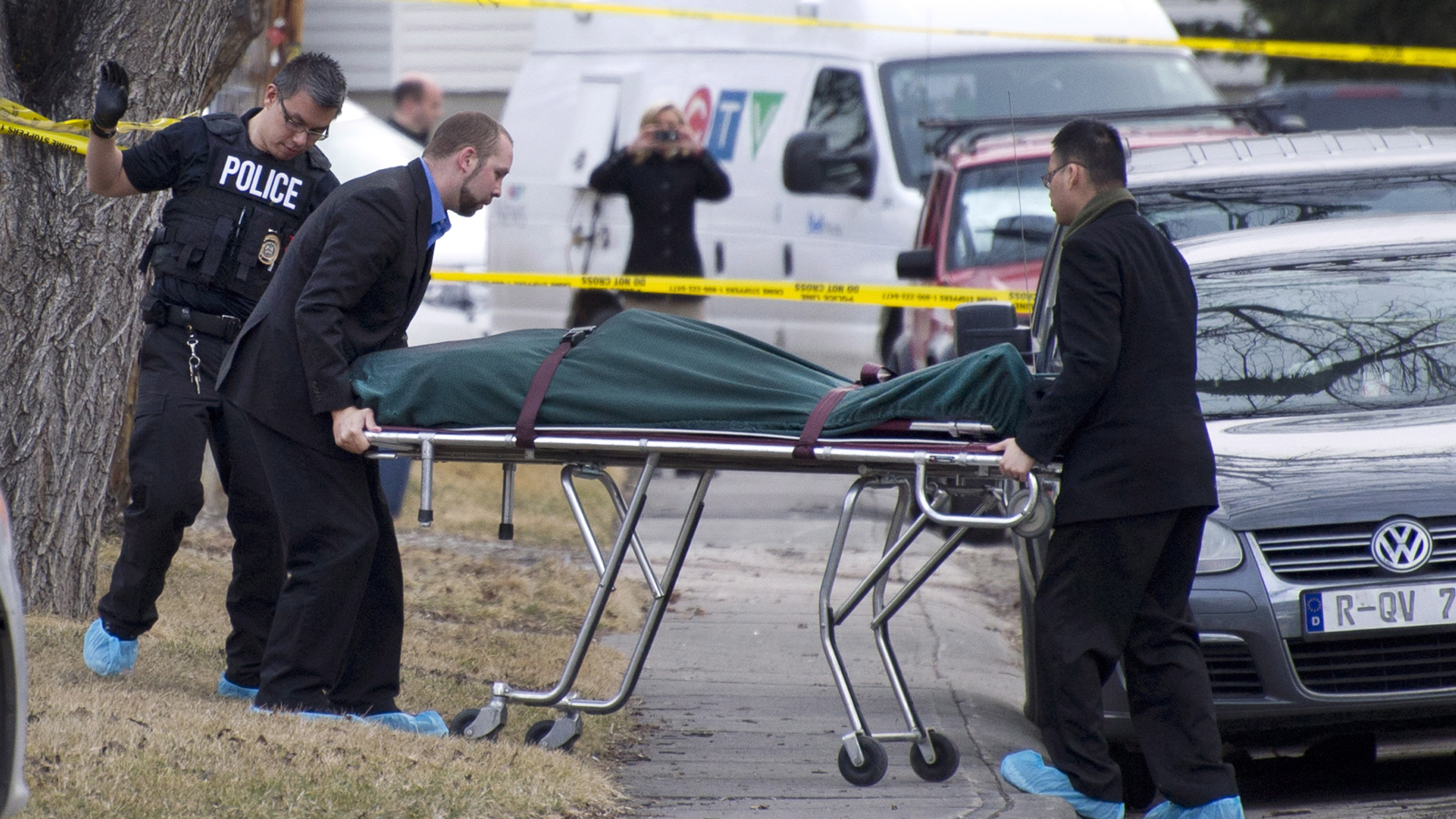 Police remove a body from the scene of a multiple fatal stabbing in northwest Calgary, Alberta on Tuesday, April 15, 2014. Police say five people are dead after a stabbing at a house party. (Larry MacDougal/CP)

Details emerge about the five young people killed in Calgary stabbing. Joshua Hunter, Kaitlin Perras, ​Jordan Segura, Lawrence Hong and Zackariah Rathwell were stabbed to death at a house party as they celebrated the end of classes at the University of Calgary early Tuesday morning. Details are emerging today about victims of the tragic event, who were all in their 20s. Hunter, 22, and Rathwell, 23, were in a band called Zackariah and the Prophets, which had just released its first album. Hunter studied business at U of C. Rathwell was a student at the Alberta College of Art and Design. Segura, 23, studied religious studies at the University of Calgary. Perras was 23. Her family said it was “beyond shattered” and released a photo of Perras, a beautiful young woman with long blond hair. Hong was 27, remembered as a dedicated volunteer who was almost finished an urban studies degree at the U of C. The University of Calgary has offered to defer exams for anyone who is feeling too upset or stressed by the stabbings. Matthew de Grood, the son of a Calgary police office, has been charged with five counts of first-degree murder. He remains in a Calgary hospital.

Jim Flaherty remembered at state funeral in Toronto. Canada said goodbye to the former finance minister Wednesday, at a funeral in downtown Toronto. Prime Minister Stephen Harper delivered a moving speech, recalling the recent meeting where Flaherty said he would step down as finance minister. “I told Jim that he had truly been over these eight years, in my judgement, the best Finance Minister in the world, if not indeed, the best in our history,” Harper said. Flaherty’s sister Norah Flaherty and Flaherty’s wife, Christine Elliott, and the three Flaherty sons also delivered speeches. Opposition leaders Tom Mulcair and Justin Trudeau, Governor General David Johnston and Bank of England governor Mark Carney were just some of the dignitaries in attendance. Flaherty, 64, died suddenly of a suspected heart attack last week. Maclean’s has full coverage of the funeral over here.

Hundreds still missing after South Korea ferry sinks. Nearly 300 people, many of them high school students on a field trip, are still missing after a ferry sank off the coast of South Korea Wednesday morning. At least 164 people were rescued and some of the survivors told a CNN-affiliate that they were told to remain in place, even as the ferry sank. Those who survived told CNN that they disobeyed orders, donned life jackets and jumped into the ocean to swim to safety, or to crawl to the top of the submerged ship. The rescue operation continues.

London, Ont. teen arrested after Heartbleed security breach at CRA. Police say a 19-year-old man has been arrested after someone took advantage of a security flaw in the Canada’s Revenue Agency’s encryption software to steal about 900 social insurance numbers. The hack was part of what’s being called the Heartbleed bug, a flaw in a popular piece of open-source security software that was publicized just last week. Heartbleed caused the CRA to shut down its online tax-filing system in order fix the flaw, but not before the security breach occurred. Stephen Arthuro Solis-Reyes is charged with unauthorized use of a computer and mischief in relation to data. Two-thirds of the world’s servers are thought to be vulnerable to the Heartbleed bug.

AC/DC rhythm guitarist Malcolm Young “taking a break.” The rock band made the announcement Wednesday on its Facebook page, clarifying rumours from Monday that said the band was breaking up. “One of the boys has a debilitating illness, but I don’t want to say too much about it,” band frontman Brain Johnson said in an interview with the Telegraph earlier in the week. “He is very proud and private, a wonderful chap. We’ve been pals for 35 years and I look up to him very much.” However, this is not the end for AC/DC. The Facebook statement assured fans: “The band will continue to make music.”