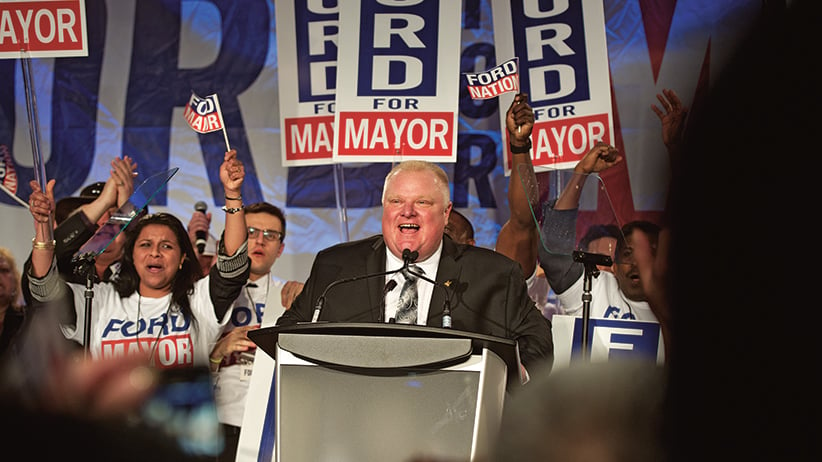 Rob Ford spotted in Bracebridge, Ont. Toronto’s mayor may have been spotted in cottage country where he posed for photos with at least two residents ahead of the Victoria Day long weekend, one outside a bank and one in a pet shop. A reporter from the Bracebridge Examiner tried to find Ford, but the elusive mayor had disappeared by the time the reporter arrived. A Twitter user managed to post a couple photos of the Fordmobile leaving the parking lot of a strip mall and then another photo emerged of dry cleaning staff posing with the mayor. The possible Ford sighting calls into question whether Ford is still in a rehab centre, as his brother and lawyer insist. Ford has not been spotted for two weeks, since he left his home with luggage amid reports of a second crack video and a recording of him making homophobic, racists and sexist remarks. The Ford family has a cottage in the Bracebridge area. And, just in case anyone is keeping track, today marks the one-year anniversary since Gawker and the Toronto Star first published stories about the Ford crack video.

Railway company involved in Lac-Megantic disaster plans to ship oil again. Central Maine and Quebec Railway, that would be the company whose rail cars derailed and exploded in Lac-Megantic last July, plans to begin shipping oil and other dangerous goods through the town again after track safety improvements are complete. President and CEO John Giles says he hopes to start shipping materials classified as “dangerous goods” through the town as early as this fall. However, the town’s mayor has said she wants the rail line rerouted to go around the town. Earlier this week, three employees at the company were charged with 47 counts of criminal negligence causing death.

Meet India’s new prime minister. The incoming Indian prime minister is Narendra Modi, a Hindu from humble beginnings whose election represents a shift to the right for the country. Modi may have grown up poor, but he completed university and has been a career politician since he joined the Bharatiya Janata Party party in 1985. Modi won the election with promises of improving the country’s economy and focusing on business, rather than social policies. Modi’s election comes with some trepidation, particularly from the country’s Muslim population. He has ties to a far-right Hindu group in the country and, in 2002, riots between Muslims and Hindus broke out in the state where Modi was chief minister. Nearly 1,000 people died in the clashes, many of them Muslims, and Modi hasn’t taken responsibility for those events.

Nuclear talks with Iran don’t go well. Talks in Vienna between Iran and six other world powers over the country’s nuclear capability ended in a stalemate Friday, with both sides far apart on key issues. Ideally, the nations wanted to make a deal by July 20 that would see Iran curb its nuclear program in exchange for lifted sanctions. Iran continues to insist that is isn’t interested in nuclear arms, but is enriching uranium for energy. However, the talks will continue, even though the target deadline will likely be missed.