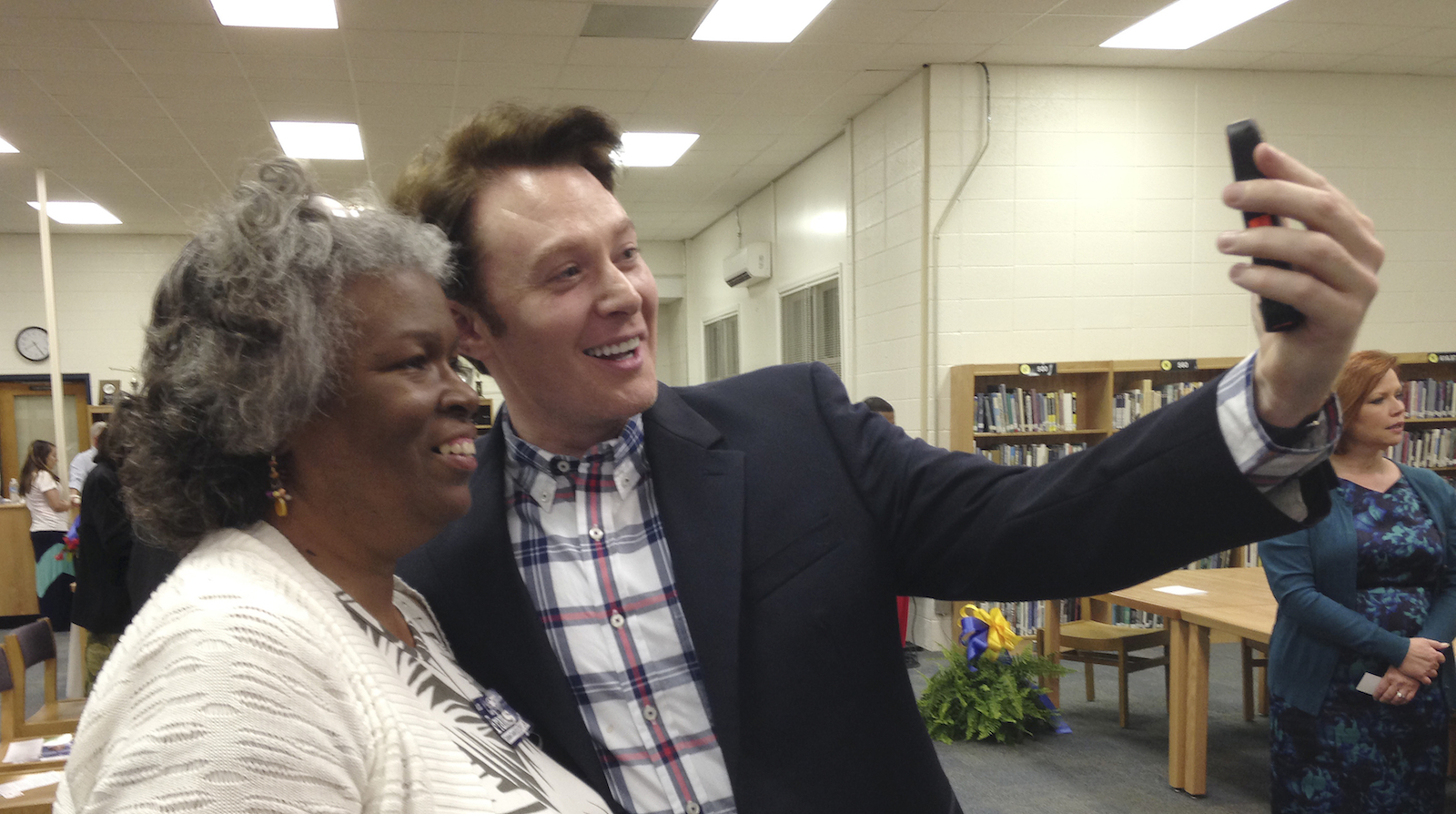 Clay Aiken takes a picture with a constituent after a campaign forum in Cary, North Carolina on April 28, 2014. (Colleen Jenkins/Reuters)

American Idol runner-up Clay Aiken wins Democratic nomination after his opponent dies. In what is truly one of the stranger news headlines of the week, it looks like the Season 2 American Idol runner-up is now a Democratic congressional candidate for the state of North Carolina, but only after his main opponent died suddenly. Aiken wasn’t the clear winner in the close race, where ballots were still being counted nearly a week after the primary election. However, Aiken’s opponent Keith Crisco, a 71-year-old business man, was found dead at his North Carolina home Monday. His campaign team said he had an accidental fall while entering the front door of his home, leading to his death. They also said that Crisco had planned to concede the race to Aiken on Tuesday. Aiken’s next opponent will be incumbent Republican Renee Ellmers, who he faces in a vote in November.

Trial date set for Rob Ford’s friend Alexander Lisi. Ford’s friend, sometimes driver and drinking buddy will face two court cases, for extortion and drug charges, in spring 2015. The extortion charges relate to the Ford crack video, which police allege Lisi made threats over as he was attempting to retrieve it. The timing for the trials means that if the crack video does, indeed, come out in court, it won’t be until well after the city’s 2014 civic election. Also, testimony about just what Ford and Lisi may have been exchanging as police observed them swapping large manilla envelopes and shopping bags in parking lots near the mayor’s home will be heard after Torontonians choose their next mayor. In other Toronto political news, Coun. Adam Vaughn, Ford’s most outspoken critic, officially left city hall today. He’s running for the Liberals in the downtown Toronto riding of Trinity-Spadina in the June 30 federal byelection. But, there was time for one more shot at Ford before Vaughn left city hall. “He was a terrible mayor, the worst mayor this city has ever had,” Vaughn told reporters.

Men charged after Lac-Megantic disaster freed on bail. The three men charged with criminal negligence causing death in connection to the Lac-Megantic rail disaster appeared in court Tuesday and were freed on $15,000 bail. Thomas Harding, Jean Demaitre and Richard Labrie were all employees of the rail company whose train cars derailed and exploded in the Quebec town in July. They have been charged with 47 counts of criminal negligence causing death. Their next court appearance is Sept. 11.

French photojournalist killed while covering Central African Republic conflict. Freelance photojournalist Camille Lepage documented life in Sudan and the Central African Republic, publishing her photos in top newspapers and magazines worldwide. Tuesday, French troops said they found her body in the Bouar region in the west part of Central African Republic. She was just 26 years old. French President François Hollande was swift to react to the news, saying that French military and police were dispatched to the scene. “All necessary means will be deployed to shine light on the circumstances of this assassination and find the killers of our compatriot,” Holland said in a statement. You can view Lepage’s work here.

Top UN official tasked with negotiating peace in Syrian quits. Lakhdar Brahimi is throwing in the towel. The resignation of the UN’s top negotiator for a political solution to Syria’s bloody three-year civil war does not bode well for peace in the country. Brahimi’s departure comes after Syrian President Bashar al-Assad ignored requests and then scheduled another presidential election in the country, one he is expected to win to guarantee himself seven more years in power. Brahimi’s resignation is effective at the end of this month. There is no word on who, if anyone, will replace him.