Also: Ontario voter turnout is up, Joe Fontana guilty and other top stories 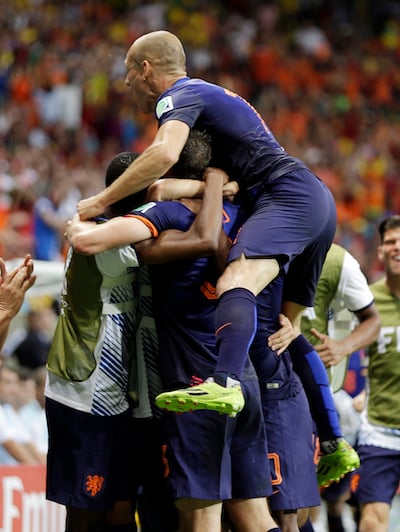 Netherlands’ Arjen Robben, top right, celebrates after teammate Stefan de Vrij scored his side’s third goal during the second half of the group B World Cup soccer match between Spain and the Netherlands in Brazil on Friday, June 13, 2014. (Natacha Pisarenko/AP)

Netherlands crushes Spain in historic World Cup match. The most-anticipated game on the second day of World Cup action was between Spain and the Netherlands, teams that faced off during the 2010 finals, which saw Spain come out victorious. Never in the World Cup’s history have the top two teams from the previous competition played one another in their opening match. The Dutch were obviously ready for the rematch, and dominated the Spanish, taking the game 5-1 by the end of the second half.

Ontario voter turnout was up. Many a prediction was proven wrong today, when Elections Ontario reported that voter turnout in yesterday’s election was 52.1 per cent, an uptick from the all-time low of 48.2 per cent in 2011. And the voters who did come out had a clear message to deliver, giving Liberal Premier Kathleen Wynne a clear majority, despite a host of scandals left behind by her predecessor, Dalton McGuinty. Perhaps the voter boost can be explained by all the public-sector employees and their families who were scared off by PC leader Tim Hudak’s promise to drastically cut the number of government jobs.

London, Ont. Mayor Joe Fontana guilty of fraud. Fontana is “very surprised, shocked, devastated” to find that he did, indeed, commit fraud when he used a government cheque to pay for part of his son’s wedding reception in 2005 and then altered a document to read “reception” instead of “wedding.” The verdict in Fontana’s trial came down today, finding him guilty of fraud, forgery and breach of trust by a public official for the crime, which he committed while he was a Liberal MP. Fontana has refused to step down as London mayor during the trial, despite pressure to do so. Sentencing arguments are scheduled for July 15. His punishment could be anything from a discharge to jail time. Fontana has not said if he will appeal.

Barack Obama won’t send ground troops to Iraq. As the conflict in Iraq slips closer to something that could be classified as a civil war, the U.S. President ruled out the possibility of sending ground troops to the country. However, other options are on the table, making air strikes seem like a possibility. The country has become increasingly unstable as the conflict from neighbouring Syria spills over. Yesterday, a radical jihadist group associated with the Syrian war took two cities near Baghdad and appeared to be approaching the capital. The most senior Shiite cleric in Iraq on Friday encouraged followers to take up arms to defend themselves against Sunni extremism. Maclean’s contributor Adnan R. Khan has more on the deteriorating situation in Iraq.

Conservative cyber-bully bill suffers setback. The Conservatives will likely have to send parts of their proposed cyber-bullying bill back to the drawing board after the Supreme Court ruled Friday that police do need to get a warrant to access information from Internet service providers. The 8-0 ruling came after a Saskatchewan man appealed child pornography charges. Police had arrested and charged the man after getting information through his service provider without a warrant. This decision means parts of Bill C-13 are likely unconstitutional, as it encourages Internet service providers to give information to police without a warrant.