Ebola virus: What you need to know 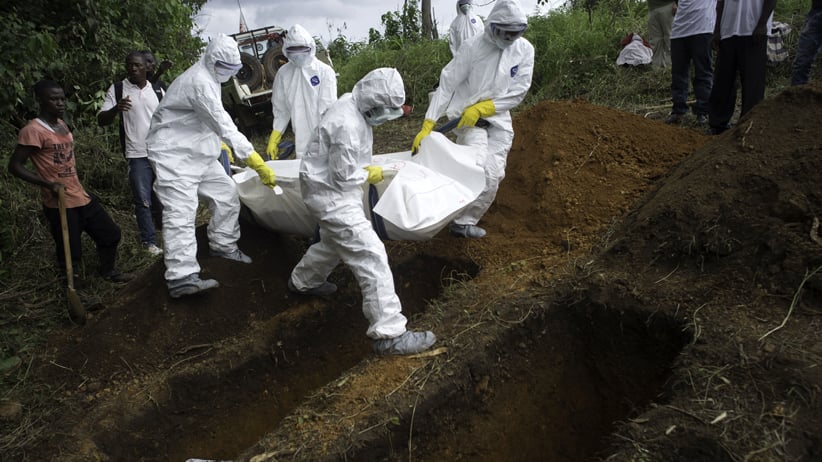 A WHO team buries the bodies of deceased patients whose families did not come near the Médecins Sans Frontières (MSF) Ebola Treatment Center in Kailahun, Sierra Leone.

Six months after the first signs of trouble, 1,711 infections and 932 deaths  from the deadly Ebola virus have the rest of the world finally catching the panic, if not the disease.

Experts expect the outbreak to rage out of control in the West African nations of Guinea, Liberia and Sierra Leone until at least the end of this year. The World Health Organization is warning the disease is moving faster than efforts to stop it. Talks are taking place in Geneva to determine if the organization will declare a global public health emergency.

The international community is waking up to the crisis. The WHO and leaders of the three affected countries have announced a joint US$100-million response plan. Public health officials in Britain held a meeting this week to plan for the possibility of the virus reaching their shores. Borders and schools are finally being shuttered in affected areas in West Africa, where everyone from civil servants to soccer stars are ordered to stay home and avoid public gatherings.

Canada has donated $1.4 million to help fight the outbreak and advises against all non-essential travel to the affected areas. The national public health agency, stressing that the risk to Canadians is miniscule, has asked Canadian border officials and family doctors to keep an eye out for people who may have been exposed.

Canadian doctors are also part of the team on the ground. On July 13, Maclean’s spoke to family doctor and Windsor, Ont., native Tim Jagatic, who is on the ground in Kailahun, Sierra Leone, working for Doctors Without Borders.

The July 25 death of Patrick Sawyer, an American working for the Liberian government, proved to be a turning point in the perception of the outbreak. Sawyer managed to get on a plane in Liberia and pass through a major transportation hub in Togo before collapsing at the airport in Lagos, Nigeria. He died of Ebola a few days later. About 70 people he had contact with are being monitored. At least one Nigerian caught Ebola from Sawyer; seven others are showing symptoms.

On Aug. 5, a man who had recently travelled to Sierra Leone died in Saudi Arabia after showing “Ebola-like symptoms.”  If confirmed, his will be the first Ebola death outside of Africa in this outbreak.

Two more Americans who contracted Ebola during an aid mission in Liberia are to be treated at a hospital in Atlanta. Kent Brantly, a doctor, and Nancy Writebol, a personnel coordinator, are the first known Ebola victims on North American soil. Brantly, who arrived stateside Aug. 2, told NPR he followed protection protocols to the letter and has no idea how he got the virus.

Both Americans seem to be improving after treatment with an experimental antibody therapy that was developed in part at the lab run by Dr. Gary Kobinger at the University of Manitoba. The drug, which is called ZMappand is made by a company called Mapp Biopharmaceutical, had never been tested on humans before, is not heat-stable and is not mass produced. Both Writebol and Brantly consented to try the treatment and accepted the risks. Conducting drug trials in the field during an epidemic is not an accepted scientific practice, but the WHO has convened an ethical review on experimental therapies. Another drug company, Sarepta, has an Ebola drug under development. It’s been used with some success on monkeys, but funding for the research dried up two years ago. The company has only a few dozen doses of the drug on hand.

Sheik Umar Khan, a leading Ebola doctor in Sierra Leone, and Samuel Brisbane, his counterpart in Liberia, have died of the disease in recent days. A Ugandan physician, Samuel Muhumuza Mutoro, died earlier this month in Liberia.

Ebola is a viral haemorrhagic fever, part of a group that includes some of the most virulent, deadly and certifiably terrifying diseases known to science. It causes a rapidly climbing temperature, weakness, full-body pain, vomiting, diarrhea, and sometimes internal and external bleeding. Simple measures like fever control and IV rehydration and fever control can knock the 90 per cent fatality rate down to around 60 per cent. There’s no proven treatment and no vaccine. But most Ebola patients spend their last days in isolation, often bleeding from their eyes and noses, before dying surrounded by people in haz-mat-style suits and goggles.

The protective gear is designed to prevent direct contact with bodily fluids. Although some transmission by droplet spray is apparently possible, Ebola mercifully does not hang around in the air like influenza or the common cold. As a virus, it’s a sheep in wolf’s clothing. It’s no match for sunlight or household bleach, and handwashing with soap and water can control its spread. That’s  why experts are universally reassuring that an outbreak anywhere in the Western world would be contained and stamped out easily. However, victims aren’t contagious until symptoms appear, which can take up to three weeks—plenty of time to travel far from the point of infection.

Fruit bats, which are found across Africa and eaten as a delicacy in many places, are thought to harbour the virus. Since it was identified in 1976 in what is now the Democratic Republic of the Congo, Ebola has been playing a grisly game of Whac-a-Mole with public health authorities; surfacing in east or central Africa every few years and infecting a handful of people. This is the first West African outbreak and the only time there’s been significant spread in urban areas. Doctors Without Borders suspects it originated in February among bat hunters near Guéckédougou, Guinea. Now it’s tearing through a densely populated area, which is already recovering from decades of civil war. Migrants seeking work in the booming mineral sector easily spread the disease across notoriously porous borders.

To make matters worse, the Kissi people, who live in all three countries, traditionally keep the bodies of dead loved ones at home for several days. At funerals, mourners touch and kiss the body in farewell. Richard Preston, documenter of tropical diseases and author of The Hot Zone, sheds some light on why that’s so risky: “In severe cases, Ebola kills so much tissue that after death the cadaver rapidly deteriorates. In monkeys, and perhaps in people, a sort of melting occurs, and the corpse’s connective tissue, skin, and organs, already peppered with dead areas and heated with fever, begin to liquefy, and the slimes and uncoagulated blood that run from the cadaver are saturated with Ebola-virus particles.”

A parallel epidemic of panic and paranoia has proven almost as deadly as the virus itself. Thousands of protesters stormed a hospital in western Sierra Leone last week after a former nurse spread the pernicious rumour that Ebola is a cover story for cannibalism. An infected woman, also in Sierra Leone, set off a nationwide manhunt when her family wrestled her from a treatment centre and took her to a traditional healer. Police tracked her down after several days, but she died in the ambulance on the way to another hospital. In Liberia’s capital, Monrovia, a survey by the humanitarian group Samaritan’s Purse found 92 per cent of local people believe Ebola is a hoax.