Letters: 'Whose fight is it, if it isn’t ours?' 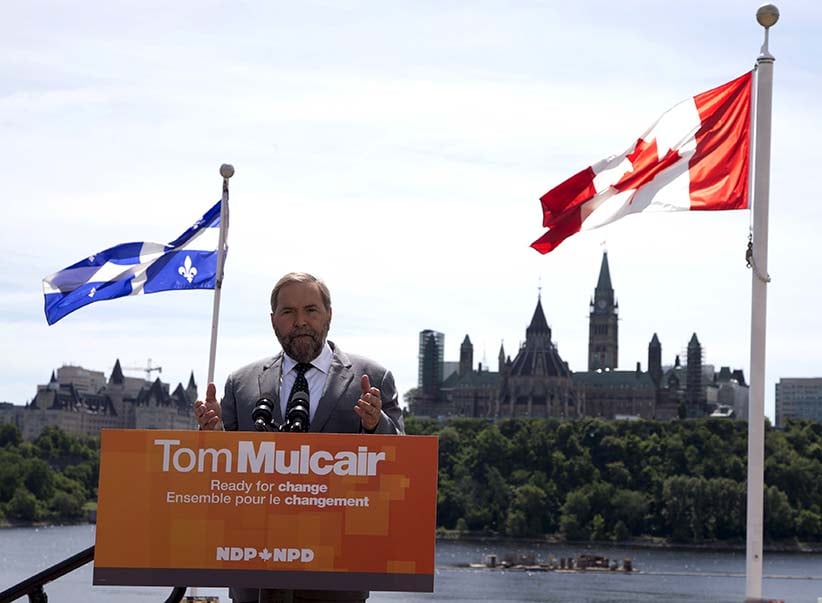 In Aaron Wherry’s interview with Thomas Mulcair (“The Interview,” Aug. 3), the leader of the NDP continues with the “Canada as peacekeeper” theme. Air strikes and contributions toward the fight against Islamic State include no fewer than 60 nations, among them Australia, Belgium, Denmark, Egypt, France, Germany, Italy, Jordan, the Netherlands and Turkey, the latter which Mulcair denies. Islamic State is a threat to us all, and handing out first aid kits and food is not enough in a time like this. The whole civilized world seems to recognize they must be stopped, at whatever cost, while Mulcair continues to say, “This is not our fight.” Whose fight is it, if it isn’t ours?

So, Mulcair says what happens in the Middle East isn’t our war. Would he have said the same about the Nazis in 1939? They, as Islamic State does now, threatened the whole world, as one of the Nazis’ songs proclaimed, “Today Germany belongs to us; tomorrow, the world.” Islamic State is worse than the Nazis, who observed the Geneva Convention, did not decapitate people in public, and had decent generals like Rommel. Islamic State has agents and supporters all over the world. So did the Nazis. In 1939 and thereafter, practically the whole world fought and defeated the mighty Wehrmacht, which took only 11 months after Normandy. We could defeat Islamic State in two weeks.

Related: What kind of force for global peace does the NDP want to be?

Mulcair delivers a message to Canadians that is diametrically opposed to the one he has been using for years in Quebec. In the pages of Maclean’s, he maintains that, according to the NDP’s Sherbrooke Declaration, the referendum question leading to the possible separation of Quebec “has to be agreed upon and argued” with the federal government. But the Declaration says exactly the opposite: that the question is to be decided by the Quebec National Assembly, acting alone, with no federal involvement. Mulcair has also attracted Quebec votes through his rejection of the Clarity Act and his position that a 50-per-cent-plus-one vote could be the trigger to break up Canada, although he’s fully aware that the Supreme Court has clearly ruled this would not be acceptable. His naming of this cynical NDP policy the Unity Act leaves me not knowing whether to laugh or cry; Monty Python would approve, but then, so would Orwell. The NDP cannot be allowed to go on saying one thing in Quebec and another in the rest of Canada. In the interests of both clarity and unity, voters must insist on a single, clear and unified NDP platform for the entire country.

I couldn’t help but notice that, of the books written by our federal leaders that Aaron Wherry mentions in his interview with Thomas Mulcair—Stephen Harper’s A Great Game, Justin Trudeau’s Common Ground, Elizabeth May’s Who We Are and Mulcair’s Strength of Conviction—only one isn’t about the author and his or her political ideology. I wonder what that says about self-importance and narcissism.

How big is my fire

In your story about forest fires (“Why blame it on the rain?” National, Aug. 3), why do you treat readers as numerical illiterates by saying fires are the size of four baseball fields or six Toronto Zoos? I don’t watch football and baseball. I’ve never visited the Toronto Zoo. This is meaningless. And do you think 248,000 hectares means anything except it’s a big fire? Please try something that will be meaningful: Express the size of fire in square kilometres: 248,000 hectares is equal to 2,480 sq. km, which is approximately 50 km x 50 km. This gives an idea about the size of a forest fire.

Canada has been outdone by the generosity of smaller countries in admitting Syrian refugees. What gives, Stephen Harper? 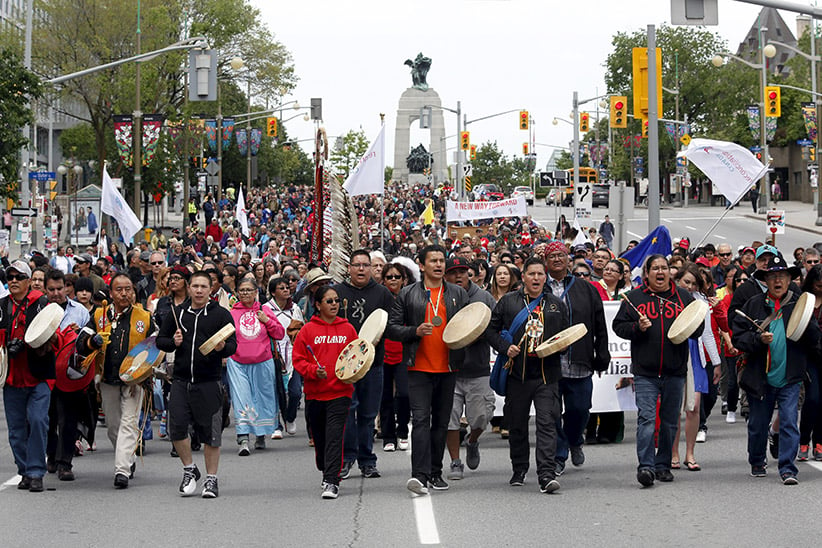 The first thing I read in Maclean’s are the letters to the editor, as I want to know how Canadians feel about issues. I might not agree with everyone, but we each have the right to our opinion. But a letter in the latest issue (Letters, Aug. 3) has me enraged. It reads: “Native peoples have no more right to the exclusive occupation of North America than barbarians had of European territories their descendants now occupy,” and, “The real genocide was not the failure of churches to anticipate residential school abuse, but the legion of left-wing social workers who still weigh down on First Nations with their smothering cult of victimhood.” There is never a justification for cultural genocide that exposes children (or anyone else) to the horrors of sexual and mental abuse. Did we learn nothing from the Holocaust and other atrocities perpetuated by human against human?

To those who join Joseph Boyden (“First truth. Now comes the hard part,” Society, July 13) and letter-writer Chris Cant (Letters, Aug. 3) in denigrating the minister of Aboriginal affairs for a lack of enthusiasm for the findings of the Truth and Reconciliation Commission, the report has already stretched law, logic and language to proclaim Canada guilty of genocide, simultaneously showing little regard for either truth or reconciliation, and none at all for the delicacy of their task. I am no lover of the Harper government, but not walking out showed more manners than I could have mustered.

Is it any wonder people in other countries like Syria perceive people in the West to be “cold and unfriendly,” where “neighbours are not close to each other” (“Life after the life before,” International, Aug. 3)? Plainly, Canada has lagged in its record for welcoming displaced civilians from other countries by apparently settling only 1,300 Syrians to date—this, during the world’s worst refugee crisis since the Second World War, according to your article. And all the while, some 12 million Syrians cling to life either inside Syrian borders or in neighbouring countries, awaiting the chance to start a new life elsewhere. Canada has been outdone by the generosity of smaller countries, such as Sweden, Lebanon and Turkey, during this period of international crisis. What gives, Stephen Harper? Why have we left these people twisting?

Wildrose Leader Brian Jean must be smoking those wild roses (“Alberta: Not the Brian Jean Show”, National, Aug. 3) when he says Stephen Harper is the best Prime Minister we’ve ever had. Without straining, I can think of 20 reasons why Harper is the worst Prime Minister ever. Also interesting is Jean’s description of the Conservative caucus as “disciplined soldiers” who “admire” [Harper] and will “follow him into the battlefield.” Am I the only Canadian who ﬁnds this unsettling? 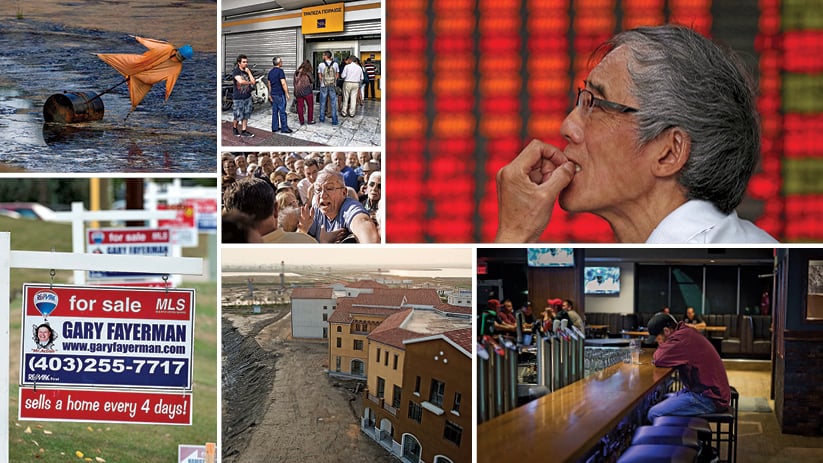 The sky is falling!

My compliments to Maclean’s for the article on Canada’s current and ongoing recession (“Hard times ahead,” Economy, Aug. 3). What is most amazing about Canada’s political process is the extent to which politeness and denial seem to dominate economic discussion. The notion that Canada’s economic prospects will brighten with a resurgent manufacturing sector is an illusion ignoring the enormous decline that has occurred in the last 10 years. The number of manufacturing jobs that no longer exist is evident in the closure or downsizing of GM, Toyota, Caterpillar, GE and Heinz factories, to name only a few. The cost of electricity in the primary manufacturing province of Ontario has made it uneconomic to continue to operate in Canada. And the lower dollar makes it exorbitantly expensive to purchase new equipment, most of which is only available outside Canada, further lowering productivity. And for those folks eating foods not produced in Canada, be prepared to see a significant increase in cost over the next few years. The pathetic attempt by the Bank of Canada to solve our problems with the latest interest-rate reduction will only contribute to a real estate bubble, making higher home prices that are already unaffordable in Toronto and Vancouver. Amid all this doom and gloom, all three major political parties are convinced that infrastructure investments with borrowed money will be our salvation. This will all end badly. Perhaps we will look to Greece to advise us on how to handle the collapse of our economy and standard of living.

Maclean’s has for several years “cried wolf” about the overheated housing market, but, as for Chicken Little, the sky did not fall—at least it hasn’t yet. However, prices cannot continue outrunning productivity and wages indefinitely, as Chris Sorensen and Aaron Hutchins aptly outline in their article. A combination of falling demand for our raw materials from China and sluggish growth in our manufacturing industries does not augur well for our economy, and the recent cut in interest rates will do more harm than good for housing in the longer term. At the same time, manufacturers aren’t likely to make major investments if they don’t see a major uptick in U.S. and world demand. I remember with some trepidation the huge drop in real estate values in the late ’80s and early ’90s and, even though the current situation is quite different, as a small-time real estate investor, I am not very sanguine about the near future. As an aside: Since I rejoined your regular readers as a subscriber, I’ve noticed a more thorough and nuanced approach to your reporting, and I enjoy your brief editorials. I am also thrilled to notice the absence—so far—of Barbara Amiel.

This Roman is French

In “An insane request for asylum” (International, July 20), you identify Roman Polanski as “the American director.” As Americans, many of whom are avid readers of your magazine, we must take responsibility for many things. The notorious Polanski is, however, not one of them. He was born in Paris of Polish parents and is a naturalized French citizen, not an American.

After reading “Mummy, what’s a cisgender?” (Books, Aug. 3), I discovered that Cory Silverberg, author of Sex Is a Funny Word, is male. I had figured female! Is that spectrum or binary? Now in my second childhood (84), it’s educational hearing new ideas and words—cisgender? I applaud eight-year-old Bronwyn, who called the book “awesome.” Vive la différence!

The Greeks have recently voted themselves further access to the pockets of their compatriots in the eurozone without extending the privilege of that vote to the citizens of the nations affected. This is not much different from the behaviour of the citizens of Ontario who have, over the past few elections, been increasingly voting themselves goodies to be funded by the as-yet-unearned wages of the next generation of Ontarians. As Paul Wells suggests (“The worst form (except for all the others),” July 20), democracy has indeed become a tricky word.