Noted on Instagram: The Great One is going to be a grandfather 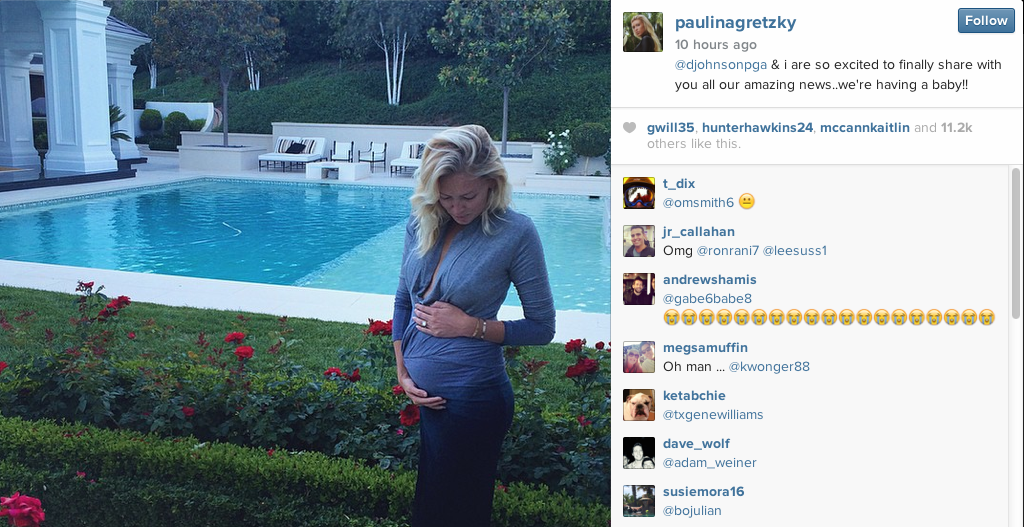 The Great One is going to be a grandfather.

Wayne Gretzky’s daughter Paulina announced Tuesday on her Instagram account that she and fiance, pro golfer Dustin Johnson, are expecting their first child.

The 25-year-old posted a photo of herself cradling her belly, with the caption: “@djohnsonpga & i are so excited to finally share with you all our amazing news..we’re having a baby!!”

Younger brother Trevor Gretzky, a minor-leaguer in the Los Angeles Angels’ organization, followed up by tweeting “Uncle Trev” along with the same photo.

It’s the first grandchild for the hockey legend and his wife, Janet, who have five children. Paulina is the eldest.

Johnson and Gretzky announced their engagement in August 2013.

In July, the 30-year-old Johnson announced he was taking a leave of absence from the PGA Tour to seek help for “personal challenges.” Golf.com reported at the time that the tour had suspended him for six months due to a third failed drug test. The PGA Tour denied the report, saying that Johnson’s leave was voluntary.