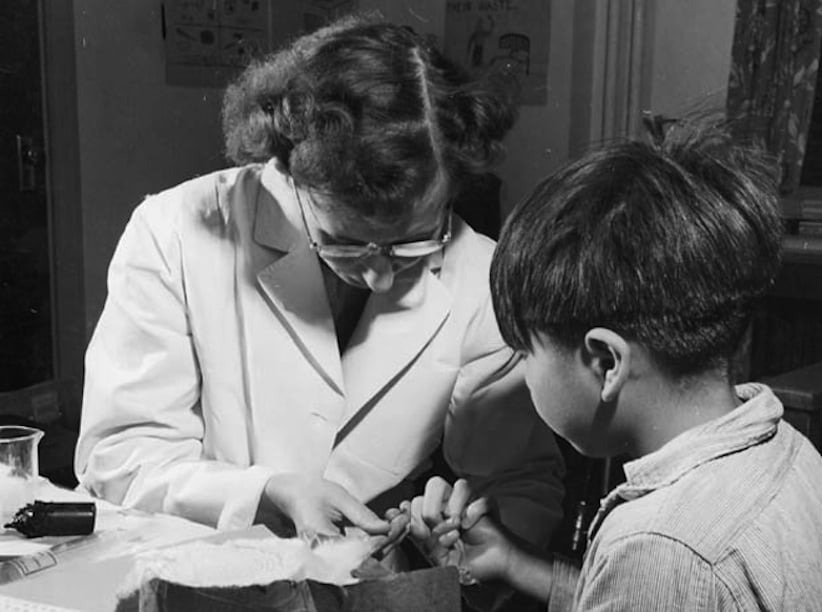 A nurse takes a blood sample from a boy at the Indian School, Port Alberni, B.C., in 1948. (Library and Archives Canada)

A report detailing a dark chapter of Canada’s history is to be released today in Ottawa. Five years and $60 million have gone into the Truth and Reconciliation Commission’s six-volume study of Canada’s residential schools. About 150,000 First Nations, Inuit and Metis children were taken from their families and forced to attend residential schools, with some 80,000 still alive today.

Jacques Parizeau, the blunt-talking sovereigntist premier whose strategic cunning came close to ripping Quebec out of Canada, has died. He was 84.His spouse, Lisette Lapointe, announced his death Monday night on her Facebook page. The blustery, mustachioed Parizeau was premier during the 1995 provincial referendum which saw the federalist No side defeat sovereigntists by a whisker after a bitter campaign.

AT THE DUFFY TRIAL

Witness testimony is expected to resume today at the trial of Sen. Mike Duffy.After a three-week hiatus, the trial resumed Monday with a minor victory for the Duffy team. Justice Charles Vaillancourt ruled that a Senate committee report could be entered into evidence.

A STAR CANDIDATE IN MONTREAL RIDING?

People vying for the federal Liberal nomination in one of the few remaining open ridings in Montreal are not-so-subtly suggesting the party is delaying the vote to favour a perceived star candidate who is a friend of Leader Justin Trudeau. Melanie Joly, whose charm and fundraising and get-out-the-vote abilities make her highly coveted, became well-known in Montreal after her novice political campaign in 2013 ended with her finishing second in the race to become the city’s mayor.

It’s been about eight years since the Alberta government last decided to tackle the thorny subject of oil and gas royalties. Now, the new NDP government is getting an earful of advice —much of it contradictory — as it prepares to reopen that can of worms. Industry players were livid, with many threatening to take their money elsewhere.