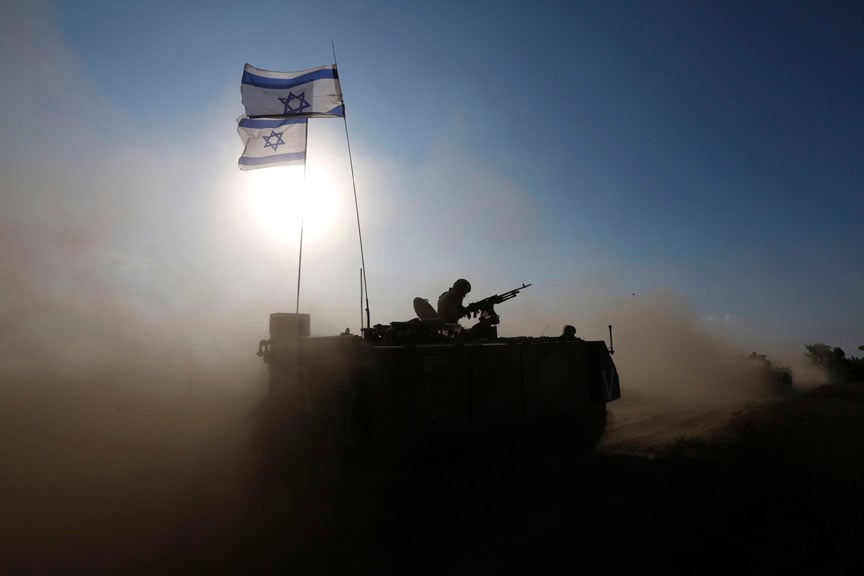 An Israeli soldier rides an armoured personnel carrier towards a staging area near the border with the Gaza Strip on August 4, 2014. (Baz Ratner/Reuters)

Israel and Hamas negotiate as deadline on temporary ceasefire approaches. The ceasefire in Gaza will expire at midnight tonight. The good news: both sides were still talking well into the evening in Egypt, where the peace talks are being mediated. However, a similar ceasefire ended with rocket fire as soon as it expired on Friday evening. In this most recent round of conflict in Gaza, more than 1,900 Palestinians have been killed, most of them civilians. In Israel, 67 people have died. All but three of the Israelis killed were soldiers.

Toronto police chief Bill Blair serves Rob Ford’s brother with defamation notice. Blair wants a public apology and retraction from Coun. Doug Ford, but it doesn’t look like he’ll get it. At least not today. Blair served Ford with a defamation notice Monday evening over comments Ford made earlier this month about a leaked story that the police were planning to subpoena Mayor Rob Ford to testify at the drug and extortion trial of his friend Alessandro (Sandro) Lisi. When this information was leaked to the Toronto Star, Coun. Ford suggested the leak came from the chief himself and that it was “payback” for the Police Services Board failing to renew Blair’s contract. Blair is using his personal funds, not taxpayer money, for this legal action. There is no timeline at this point for when Ford must apologize.

NDP must repay staff salaries for satellite offices in Quebec, committee rules. The money paid to staff working at unauthorized NDP offices in Quebec must be returned, the committee that oversees House of Commons spending said Tuesday. This decision comes after the same committee already ruled that partisan mailings from the same Quebec offices—to the tune of $1.17 million—were misspent and should be repaid. However, the NDP is putting up a fight. It says the Liberal and Conservative MPs on the board of internal economy are ganging up on the NDP. It has already said it will challenge the ruling on mailings and it is expected to do the same over this salary ruling.

Marc Emery on his way back to Canada. Canada’s “Prince of Pot” is on his way back into the country today after serving a five-year sentence in a U.S. prison for selling marijuana seeds across the border. Emery is due to arrive at the border crossing in Windsor, Ont. where he will be meet his wife, Jodie Emery, who is also a marijuana activist. Earlier this month, Marc and Jodie Emery spoke to Maclean’s about what comes next.

Harper and Obama talk Iraq. Prime Minister Stephen Harper and U.S. President Barack Obama had a phone date Tuesday, where Harper expressed his support for U.S. air strikes in Iraq and offered additional Canadian help, if needed. However, that help is more likely to come in the form of humanitarian aid, rather than direct military action. So far, Canada has sent fighter jets to Cyprus to help the British military deliver aid. Canada also pledged $5 million worth of emergency supplies to the country on Sunday.