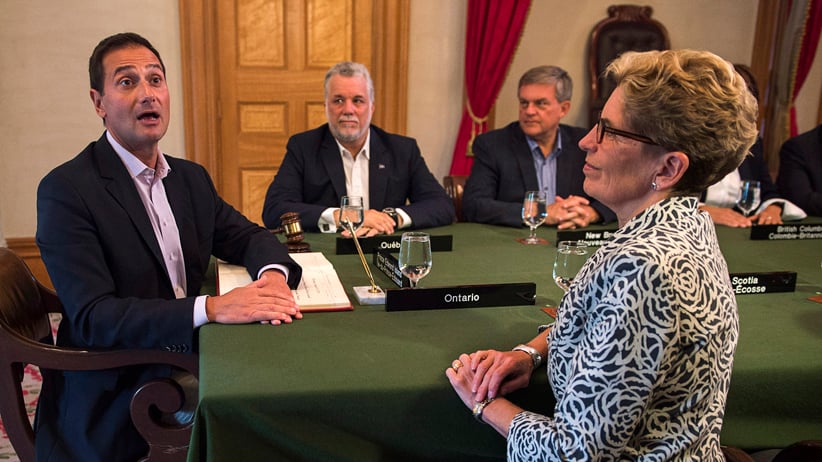 Premiers wrap up meeting in Charlottetown with demand for federal cash (and ice buckets). Canada’s provincial and territorial leaders wrapped up a meeting in P.E.I. today, with some key demands being federal funding for infrastructure and for health care to support Canada’s aging population. The charge was lead by the premiers of Canada’s two largest provinces—Ontario Premier Kathleen Wynne and Quebec Premier Philippe Couillard. The two Liberal premiers, both recently elected with strong majority mandates, seem to be poised to work together to pressure Ottawa. Other notable items to come out of the meeting: a deal between Saskatchewan and B.C. to allow for free trade on wine, Quebec signing on to a national energy strategy, a deal between Alberta and Nova Scotia to increase labour mobility and, finally, three of the leaders dumping buckets of ice water over their heads to raise funds for ALS research.

Russian rebels push towards key port in Mariupol, Ukraine. Russian-backed rebels have already taken the Ukrainian port town of Novoazovsk and appear to be moving towards Mariupol. Should the militants take Mariupol, it would provide a more direct link between Russia and the Crimean Peninsula on the Black Sea. Russian President Vladimir Putin also made his first direct address to the rebels Friday, posting a statement on his website that referred to an area broader than just Donetsk and Luhansk, where much of the fighting between rebels and the Ukrainian military has been concentrated so far.

Feds promise legislation to end fees for paper bills. Paying extra to get a paper bill telling you to pay up is kind of the worst. New legislation, to be introduced in the fall session of Parliament, will prohibit this unpopular practice and companies  will no longer be permitted to charge their clients extra to receive paper bills, Industry Minister James Moore announced Friday. The populist move from the Conservatives appears to be aimed squarely at the big telecom companies, where it’s common for customers to be charged an extra $2 to get a paper bill, rather than an electronic statement.

Is mandatory voting a good thing? The federal Liberals are floating the idea of mandatory voting as a strategy to address low voter turnout rates in the country. The idea is being sent to grassroots members for feedback after a Liberal summer caucus meeting last week. A mandatory voting system is in place in Australia, where people are fined $20 for not voting. In Australia, voters are allowed the option of making no choice or spoiling their ballot.

Joan Rivers remains in serious condition. The comedian known for her snarky red-carpet commentary remains in serious condition in a New York hospital one day after going into cardiac arrest at a doctor’s office. “Her condition remains serious,” Rivers’ daughter, Melissa Rivers, said in a statement released Friday. “We ask that you continue to keep her in your thoughts as we pray for her recovery.”