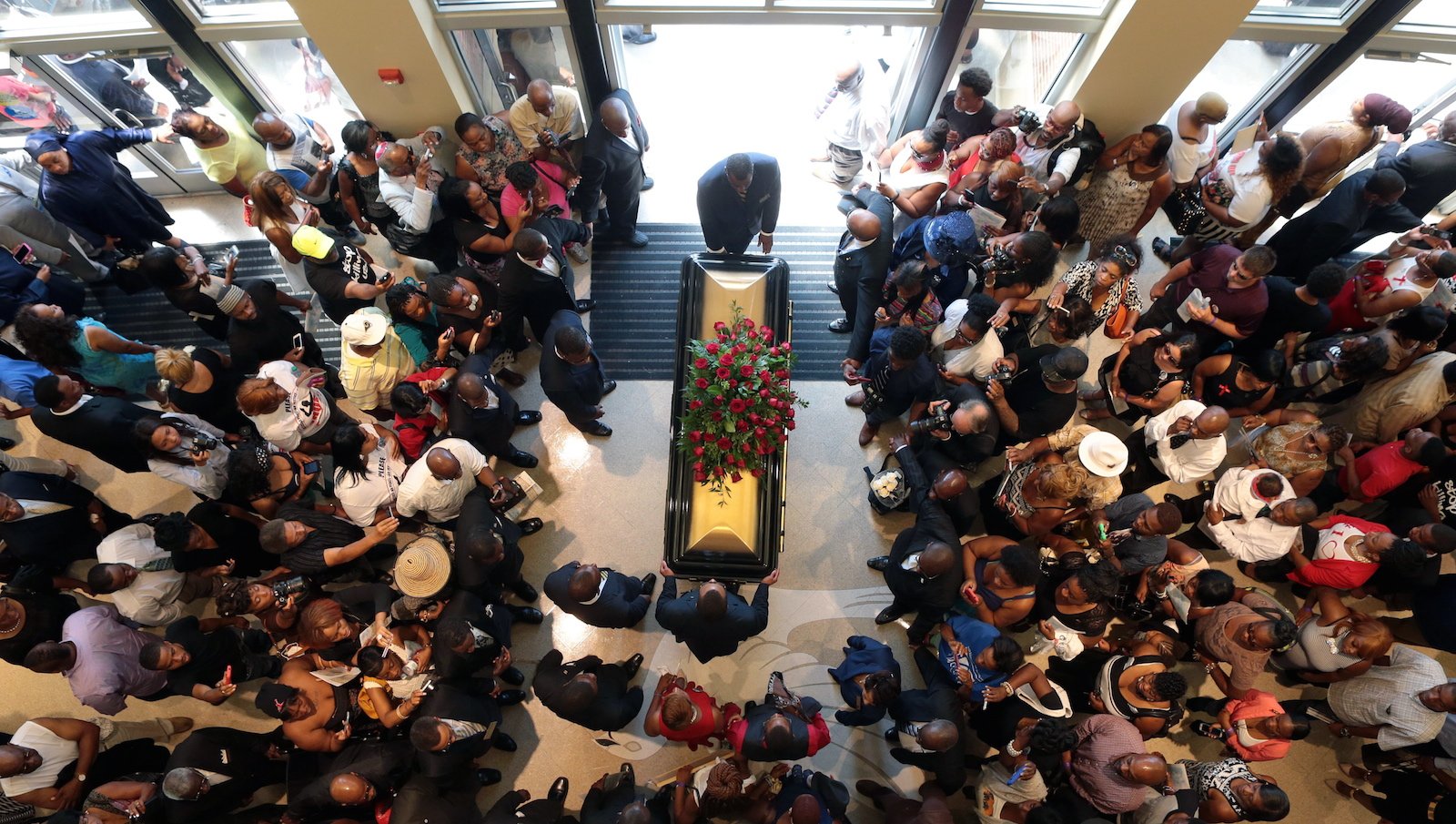 A casket containing the body of Michael Brown is wheeled out on Monday, Aug. 25, 2014, at Friendly Temple Missionary Baptist Church in St. Louis. Hundreds of people gathered to say goodbye to Brown, who was shot and killed by a Ferguson, Mo., police officer on Aug. 9. (St. Louis Post Dispatch, Robert Cohen, Pool/AP)

Michael Brown remembered as “gentle soul” at funeral. Family, friends and hundreds of other mourners gathered to remember Michael Brown at a church in St. Louis, Missouri today. The unarmed black 18-year-old was shot and killed on Aug. 9 by a white police officer in the St. Louis suburb of Ferguson. The shooting sparked nights of protests against the Ferguson police department, many of which have turned violent. However, Brown’s father, Michael Brown Sr., asked protesters to take a day off Monday so that his son could be laid to rest and the family could grieve. So far, protesters seem to have honoured this request.

Tim Hortons expected to merge with Burger King. Tim Hortons and Burger King are in talks for a friendly merger. If it goes ahead, the move would benefit the American Burger King, allowing it to pay a lower Canadian corporate tax rate. As for Tim Hortons, the merger could allow the company to access new markets; it is running out of places to expand in Canada and its U.S. stores have not performed as well as anticipated. Both companies are expected to retain their individual stores, unlike during the Wendy’s-Tim Hortons merger two decades ago, which was largely a bust for Wendy’s.

Ukrainian president dissolves parliament, calls election. President Petro Poroshenko today dissolved the Ukrainian parliament and is calling for an early election on Oct. 26. The move comes as the country continues to battle Russian seperatists in the eastern part of the country. It is also one day ahead of a scheduled meeting between Poroshenko and Russian President Vladimir Putin. Also in eastern Ukraine today, the Associated Press reports that weapons are easily passing from Russia, across the border, and into eastern Ukraine.

And then there were just two Bloc MPs. Bloc Quebecois member Andre Bellavance announced today that he is leaving the party and will sit as an independent until the next election. He will not run again in 2015, he also announced. Bellavance said his decision came after a meeting with current Bloc MP Mario Beaulieu, who Bellavance ran against for party leadership, and lost to. “I no longer felt comfortable with this team,” Bellavance said. “I don’t feel that we are going in the right direction.” Bellavance’s departure leaves the Bloc with only two sitting MPs, the same number as the Green Party.

It’s Emmy’s night. The 66th annual Primetime Emmy Awards get underway at 8 p.m. ET this evening to recognize the best programming on television. Will Modern Family win again? Will Best Drama go to Game of Thrones, or Breaking Bad? And will Parks and Recreation star Amy Poehler finally get an Emmy, as her popular comedy enters its seventh and final season? Until the show goes live, here are the top picks from Maclean’s television watchers Adrian Lee and Jamie Weinman.

FILED UNDER: 5 at 5 ferguson