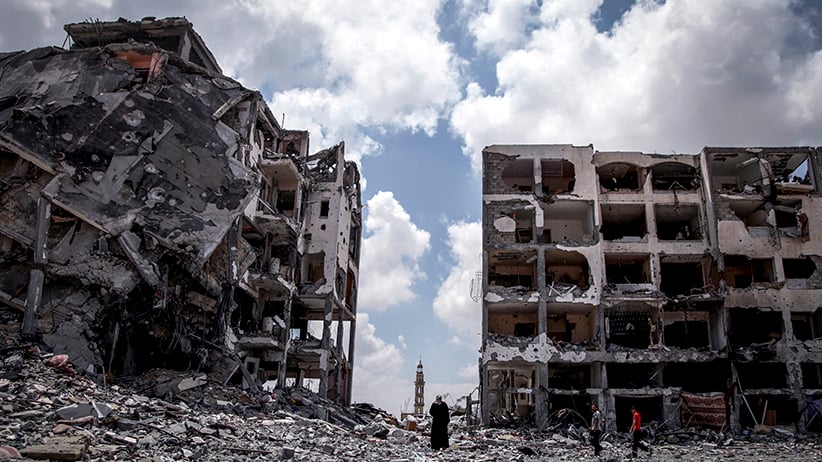 1. Gaza could be stalling a war-crimes probe. On July 25, Palestinian leaders called on the International Criminal Court to investigate the conduct of both warring sides in the deadly weeks-long fight between Israel and Hamas. The Palestinian Authority’s justice minister, Saleem al-Saqqa, co-signed a letter with Palestinian general prosecutor Ismaeil Jabr to that effect. The wrinkle: only a head of state, head of government, or foreign minister can agree to such a probe. Now, Al Jazeera has uncovered a letter from ICC prosecutor Fatou Bensouda that claims “no positive confirmation” from any of those authorized Palestinian officials. Indeed, Bensouda “did not receive a positive confirmation” after an Aug. 5 meeting with Riad Malki, the PA’s foreign minister. Whether that was a straight-up miscommunication, a misunderstanding, or an internal Palestinian disagreement remains unclear. Neither the PA nor the ICC answered Al Jazeera’s calls.

2. Rob Ford moved to a different hospital. Toronto’s beleaguered mayor, diagnosed with a tumour and undergoing severe abdominal pain, made the trip today from Humber River Regional Hospital to Mount Sinai Hospital in downtown Toronto. His brother, the usually talkative Coun. Doug Ford, said little to reporters on the scene. Doug did thank well-wishers for their messages and relayed that the mayor was in good spirits, but declined to comment much on the future of the Fords’ mayoral campaign. The deadline to enter the race is Friday, and brother Doug could register if health issues force Rob to step aside. Little is known of the mayor’s condition.

3. The anti-ISIS coalition grows. President Barack Obama’s latest allies in a renewed fight against terrorists in Iraq and Syria are the Gulf Co-operation Council, Egypt, Iraq, Jordan and Lebanon. Representatives of those Arab nations joined U.S. Secretary of State John Kerry in Saudi Arabia, where they signed the Jeddah Communique that declared a “shared commitment to stand united against the threat posed by all terrorism.” They also committed to, “as appropriate, joining in the many aspects” of whatever military campaign the coalition wages against ISIS fighters in Iraq and Syria. Meanwhile, Russia called any American-led fighting in Syria a “gross violation” of international law. Imagine the Americans’ surprise.

4. Oscar Pistorius isn’t guilty of murder. But he may not be innocent, either, in the killing of his former girlfriend, Reeva Steenkamp. Judge Thokozile Masipa, who will deliver her final verdict tomorrow, says Pistorius, who admitted to firing the four shots that killed Steenkamp, may still be guilty of culpable homicide. Pistorius was brought to tears as Masipa addressed the courtroom.

5. Have you ever heard of Spinosaurus? If you’re prone to palaeontology in the Moroccan desert, you might be lucky enough to unearth what researchers just discovered: remains of the seven-tonne beast that was bigger than a Tyrannosaurus Rex and a capable swimmer, to boot. Reuters reports that the massive predator, which carried a two-metre-tall sail on its back, “plunged into the waterways and enjoyed an all-you-can-eat seafood buffet” as it “terrorized a vast North African river system from Morocco to Egypt.” Just be glad you didn’t chance a swim in the same neighbourhood some 95 million years ago. A lead researcher described Spinosaurus’s habitat as “the most dangerous place in the history of our planet.”