Talking Points: The news you missed on your holiday

It's back to reality for many Canadians. Our Talking Points will help you sound like you kept up with the news during your holiday. 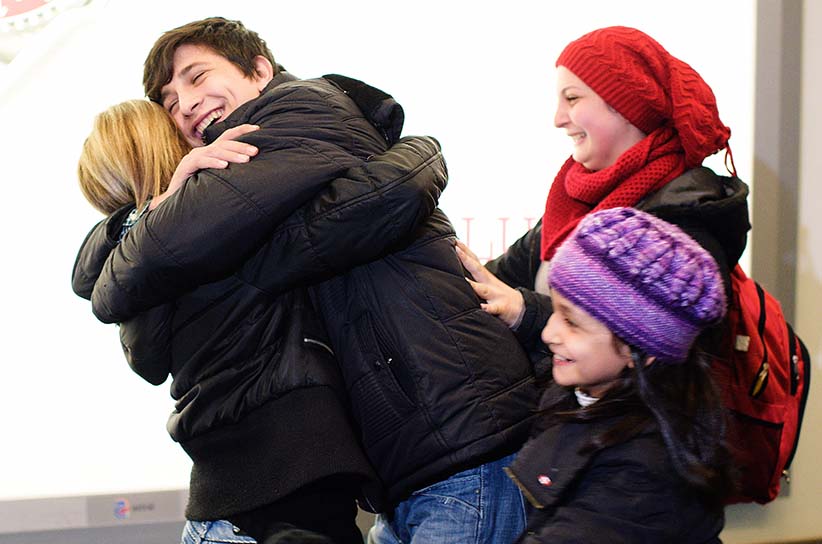 Tima Kurdi (L), embraces her nephew Chergo Kurdi as her nieces Haveen Kurdi (top R), and Ranim Kurdi rush towards her at Vancouver International airport in Vancouver, British Columbia, December 28, 2015. The Kurdis’ brother, Abdullah and his family, tried to make the crossing from Turkey to Greece on an overcrowded boat. It capsized, and his wife and children drowned. The horrific image of three-year-old Alan’s death became an iconic symbol of the plight of Syrian refugees and a major issue in the Canadian federal election. (Jimmy Jeong/Reuters)

Many Canadians are back to work this week, and you may have been too busy relaxing to keep up with the news. No worries: Our weekly Talking Points column has you covered. Read our short takes on some of the big stories from the last week and sound like the smartest person in the room:

When a three-week-old girl in Guinea left a hospital healthy this week, the World Health Organization declared the country to be finally free of Ebola—the virus that killed more than 2,500 in Guinea, where the epidemic began, and another 9,000 elsewhere in West Africa. With Sierra Leone free of cases since September, Liberia is the only country left to eradicate the virus, and just three known cases existed there as of the end of November. Unlike last New Year’s, when the governments of Guinea and Sierra Leone banned public celebrations, nearly all West Africans welcomed the year hand-in-hand.

2. Governments are giving the green light to less-polluting energy sources.

The U.S. Congress surprised many last week when it voted to extend tax credits for solar and wind projects by another five years, potentially adding enough energy to power an estimated eight million homes. Meanwhile, Alberta has promised to ditch its coal-fired power plants by 2030. While making the shift to less polluting energy sources isn’t straightforward, as evidenced by Ontario’s troubled green-energy program, it’s refreshing to see governments that previously balked at such measures now leading the charge.

3. Good health is in our control—to a point.

The vast majority of cancer cases may not be simply the result of bad luck at the cellular level. A new study found up to 90 per cent are caused by lifestyle choices like smoking and drinking, or environmental factors like sun exposure or air pollution—suggesting we have a measure of control over our own destiny. But living healthy takes more than going to the gym. It requires results. A recent Swedish study found men who were overweight and exercised were still more likely to die earlier than those who were slim and couch potatoes.

CEO Elon Musk made history when SpaceX’s Falcon 9 rocket carried its payload into orbit, performed a carefully choreographed mid-air somersault and landed vertically about 10 km from the launch pad. The feat erased memories of the rocket’s unsuccessful performance last June and helps open the door to affordable space travel by proving launch vehicles can be reused. Fellow tech tycoon Jeff Bezos boasted a similar achievement last month with his smaller, suborbital rocket—a distinction Musk pointed out on Twitter. Bezos returned the favour on Musk’s big day, tweeting a cheeky: “Welcome to the club!”

Related: The new rocket revolutionaries in the space race 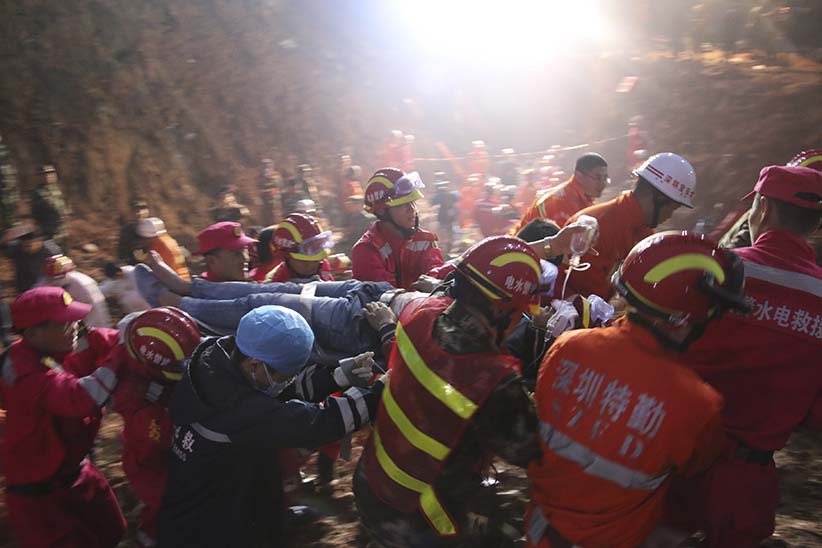 The 19-year-old survivor is carried on a stretcher after being pulled out by rescuers more than 60 hours after a landslide hit an industrial park on Sunday, in Shenzhen, Guangdong province, China, December 23, 2015. (China Daily/Reuters)

5. Canada’s economy isn’t bouncing back as quickly as many thought.

Canada’s latest GDP numbers showed zero growth in October despite predictions of a sharp rebound following September’s 0.5 per cent contraction. In a report, Scotiabank economist Derek Holt wrote that the fourth quarter is off to a “difficult start” and the economy faces a “steep uphill climb” if it is to hit the Bank of Canada’s prediction of 1.5 per cent growth for the final three months of the year. Other economists, meanwhile, are wondering whether the hotly debated “technical recession” of early 2015—brought on by the rout in oil prices—ever actually left.

A teenager with a baseball bat was deemed enough of a threat for Chicago police to kill the young man, along with his 55-year-old neighbour who came to the door. Both victims were black, intensifying questions of police racism in a city where friction was already high. Also this week, a grand jury in Cleveland decided the officer who shot and killed 12-year-old Tamir Rice in 2014 will not face charges. In defending the cop’s decision to shoot Tamir, who was playing with a toy gun at the time, the county prosecutor blamed the incident on the “perfect storm of human error.” Civil rights activists, meanwhile, called for protests in the streets.

Texas plumber Mark Oberholtzer is suing a U.S. auto dealership for $1 million after a pick-up truck he sold appeared in a photo tweeted by Islamic State fighters. The image shows black-clad militants firing a machine gun from the bed of Oberholtzer’s old truck, which still bears his firm’s logo and phone number. It’s a sinking feeling that may be familiar to six-year-old Isis Redbanks of Toronto, who was told she couldn’t take part in a Nutella promotion that offered a personalized jar. The terrorists win again.

Related: Scott Gilmore on the most enduring myth of terrorism

8. British teeth aren’t so bad, after all.

Who can forget the Simpsons episode in which a dentist reaches for the The Big Book of British Smiles? Despite the stereotype about Britons with bad teeth, new research shows American mouths may actually be less healthy than their U.K. counterparts. After reviewing thousands of dental records in both countries, researchers at Harvard and University College London found Americans were more likely to have missing teeth and bad gums, particularly if they were poor. Another reason to floss: a new study has drawn links between breast cancer and periodontal disease.