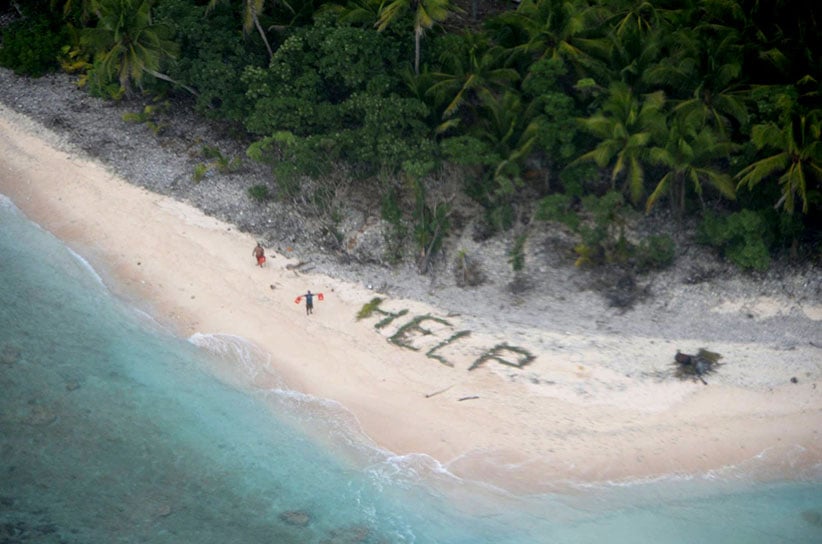 Two of three men stranded on the uninhabited island of Fanadik in Micronesia wave life jackets next to palm fronds spelling the word “HELP” as a U.S. Navy P-8A Poseidon maritime patrol and reconnaissance aircraft discovers them, in this picture released by the U.S. Pacific Fleet taken April 7, 2016. Three days earlier, the the men’s 19-foot skiff capsized after setting out to sea from Pulap. The men were later picked up by a local boat and returned to safety. (US Pacific Fleet/Reuters)

1. CRA hunts down tax dodgers of the 21st century.

In the wake of the Panama Papers leak, the Canada Revenue Agency is vowing to recoup $2.6 billion by hunting down tax dodgers who use offshore accounts. The initiative involves hiring as many as 100 additional auditors and scrutinizing international transfers in excess of $10,000—starting with ones involving the Isle of Man. Though the tax agency got off to a shaky start, by asking the CBC to hand over documents belonging to a Panamanian law firm that specializes in offshore deals (the CBC doesn’t work for the CRA), collecting money from tax cheats has never been more important, given Ottawa’s return to running big deficits.

Canadian businesses added 40,600 net jobs in March, the biggest monthly increase since last fall. The hiring surge surprised analysts—particularly in oil-shocked Alberta, where unemployment fell nearly a full point to 7.1 per cent. The data suggest Canadian companies are finally taking advantage of a cheap loonie to boost exports. Even the OECD says it’s spotted signs of “growth stabilization” in Canada. Not exactly a return to the boom years, but we’ll take what we can get.

3. Eat your heart out, space race.

Elon Musk’s spacefaring firm SpaceX successfully landed its Falcon 9 rocket on a floating barge shortly after resupplying the International Space Station, notching another victory in its quest to make space travel affordable with reusable rocketry. Looking further afield, physicist Stephen Hawking is backing an effort by Russian billionaire Yuri Milner to send thousands of tiny probes, each the size of a computer chip, to the nearest stars at one-fifth the speed of light. Like little sailboats, the nanotech spaceships would catch a ride on an earthbound laser beam, slashing travel times from 30,000 years to just 30.

4. Home improvement that pays off.

Finding a surprise in one’s attic is rarely something to celebrate. But instead of mice droppings or a potential termite problem, a French family two years ago discovered a long-lost painting by Italian Renaissance master Caravaggio in the rafters of their Toulouse home, experts revealed this week. It’s believed the work, depicting the gruesome beheading of the Holofernes by the Biblical Judith, and painted around 1604, is an original worth as much as $175 million. It’s a good thing the homeowners spotted it when they did—they were up there to fix a leak. 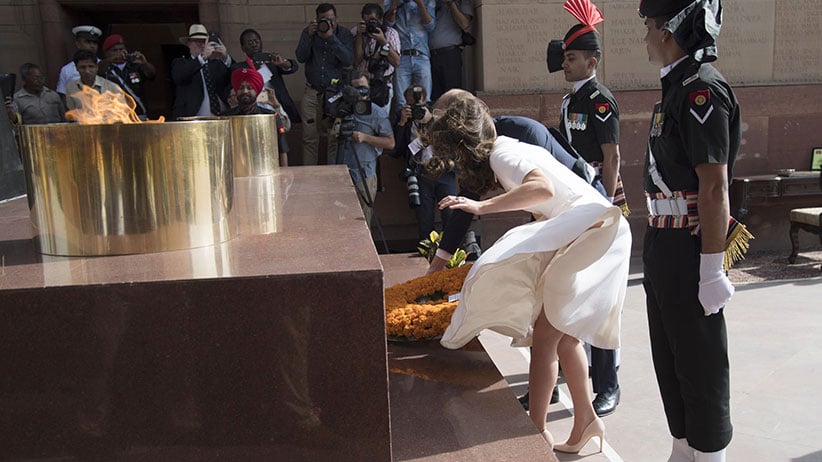 Catherine, Duchess of Cambridge, almost had a Marilyn Monroe moment as she and Prince William, Duke of Cambridge, visited India Gate Memorial where they laid a wreath to honour the soldiers from Indian regiments who served in World War I, on April 11, 2016 in New Delhi, India. (Samir Hussein/Getty Images)

Disturbing new research in the Canadian Medical Association Journal this week found Indian-born women in Canada are giving birth to more boys than expected—and researchers say abortions for sex selection may be a major factor. In Ontario, Indian-born mothers who had two daughters and an abortion before a third child birthed 326 boys for every 100 girls. Under the same scenario, but when the mother had multiple abortions, the ratio was 409 boys for every 100 girls. (Among Canadian-born mothers, research showed 105 boys were born for every 100 girls.) Researchers say 4,500 female fetuses were not born over the last 20 years.

Pope Francis published his long-anticipated exhortation, Amoris Laetitia (The Joy of Love), to end the Catholic Church’s two-year Synod on the Family. Sadly, the 60,000-word document doesn’t take a strong new stance in favour of openness toward gays, the divorced, or gender roles—issues the Church should be addressing. Francis may be more popular than the old Pope, but the old traditions spelled out in his statement show he’s not the revolutionary so many hoped.

As migrants in a Greek refugee camp tried to break through a border fence, Macedonian police fired tear gas and rubber bullets to scatter the group. It’s only the latest clash since officials started to send refugees—who are trying to reach western Europe—from Greece back to Turkey. Europe clearly needs a better alternative than fence-building and deportation, because this tide will not be stopped. Case in point: a new study found that Arabic is set to overtake Finnish as Sweden’s second-largest language spoken as a mother tongue.

The North Pole may not be Canadian for much longer. The northern end of Earth’s rotational axis had long been heading toward Hudson Bay at a rate of about eight centimetres a year. Unlike store-bought globes, Earth doesn’t perfectly revolve around the axis; it wobbles slightly, drifting toward an area losing mass. But scientists now say that around the year 2000 it changed course for the British Isles, now moving at twice the speed. The recent change in direction, researchers suggest, is partly due to melting ice in Greenland and Antarctica. No word on if Santa will adopt a British accent.