Our short takes on the news of the week, from a Colombian peace pact to a Montreal corruption trial 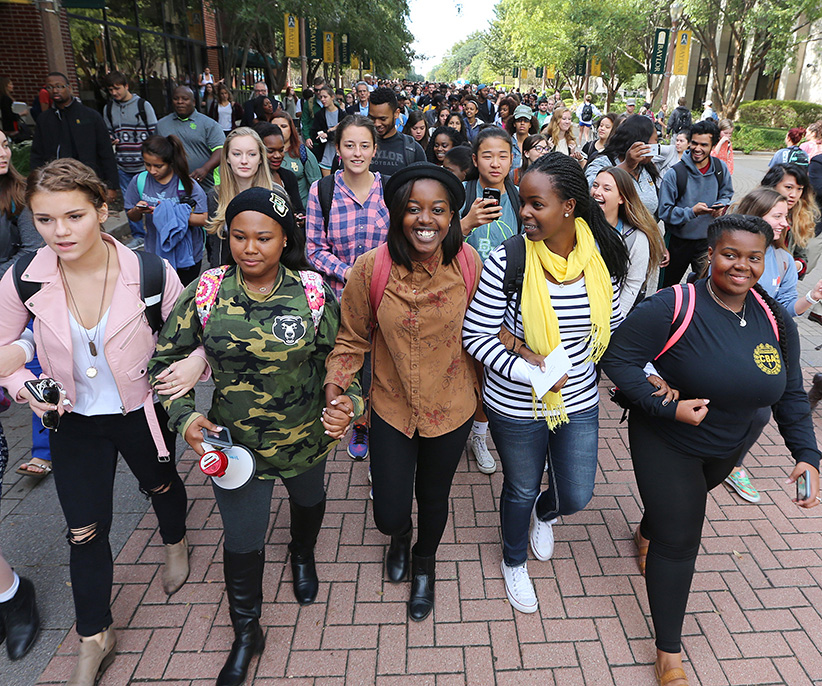 More than 300 Baylor University students, faculty and administrators walked student Natasha Nkhama to her class after she exited the Tidwell Bible Building. Nkhama reported to university officials she’d been pushed off a sidewalk and called a derogatory term while trying to get to class. Friday, Nov. 11, 2016. (Rod Aydelotte/Waco Tribune-Herald)

Quebec Sen. André Pratte plans to table legislation to stop the government from spying on journalists. Pratte hopes to make it more difficult for the police to obtain warrants to uncover journalists’ sources, as they did in the case of La Presse journalist Patrick Lagacé, whose phone was monitored. Meanwhile in Toronto, police Chief Mark Saunders has put the brakes on a plan to switch the service’s white cars to grey, which critics call inconspicuous and dangerous to pedestrians. In September, the Toronto police began rolling out the dark grey Ford Interceptors. Why? The police chief just liked the look of them—if only people could see them.

Six weeks after Colombians voted “no” to a peace pact with rebels, the government and Marxist FARC rebels announced a revised pact. Under the new deal, outlined in a televised address by President Juan Manuel Santos, FARC will hand over all its assets, to be used for reparations to victims of the war, which for more than 50 years tore the country apart and took 220,000 lives. Former rebels, in return, will likely not face prison time or be barred from holding office. At this time, there are no plans to hold another referendum. The time has come to let the healing begin.

The world got safer this week (despite the election of Donald Trump): A Canadian diver, while looking for sea cucumbers off the coast of Vancouver, stumbled upon what could be a long-lost American nuclear bomb. Given that lost weapons can be toxic and can still explode, the Royal Canadian Navy is investigating. Meanwhile, in the U.K., workers at the factory that manufactures Britain’s nuclear warheads, Atomic Weapons Establishment, voted in favour of a walk-out. They were motivated by pension negotiations, not moral concerns, but still, that means fewer weapons in the world.

New emojis coming to social media include a woman wearing a hijab and another woman breastfeeding. The Unicode Consortium approved 56 new emojis for the Unicode 10 release, based on proposals submitted to the consortium over the past year. Further, in Finland, people have called for an emoji of a girl flexing her muscles, not to mention an emoji for fuzzy socks and an emoji for sitting in a sauna. Winter is coming. 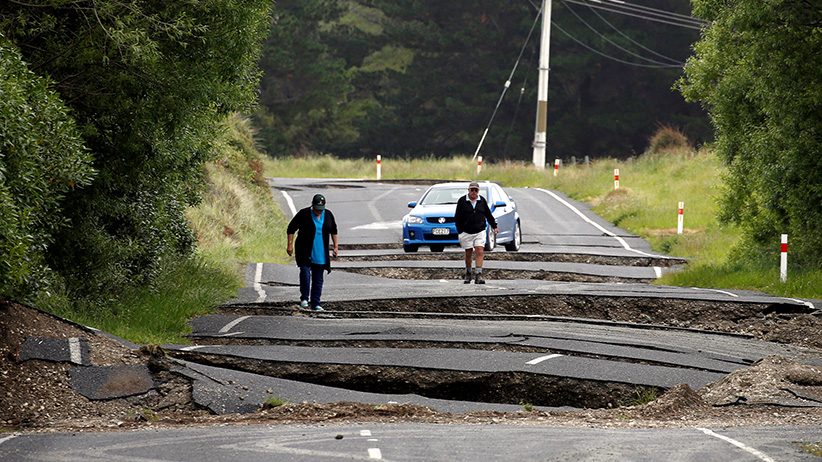 Local residents Chris and Viv Young look at damage caused by an earthquake along State Highway One near the town of Ward, south of Blenheim on New Zealand’s South Island, November 14, 2016. (Anthony Phelps/Reuters)

The trial began for former Montreal mayor Michael Applebaum, who is accused of accepting cash in exchange for helping local real estate developers. Applebaum, who maintains his innocence, faces 14 charges including fraud, corruption and breach of trust. Also in Quebec, three men were found guilty of theft, fraud and trafficking maple syrup. The trial heard that over a 12-month period in 2011-12, $18.7 million worth of syrup disappeared from a warehouse used by the Federation of Quebec Maple Syrup Producers. In dollar terms, it was “the largest theft investigated by the Sûreté du Québec in its history,” the Crown prosecutor said.

Although the RCMP had enough evidence to charge Nigel Wright with bribery, they chose not to proceed so that Wright could testify against Sen. Mike Duffy last spring, according to documents obtained by The Globe and Mail. Wright, the former chief of staff in Stephen Harper’s PMO, gave Duffy more than $90,000 to cover his expenses. Yet, Wright remained an “unindicted co-conspirator” because the RCMP determined that a conviction against Duffy held greater public interest. The end result: Duffy was acquitted on all 31 charges against him.

About one million South Koreans surrounded the compound of President Park Geun-hye, demanding she step down. The president is accused of seeking political advice from her now-dead spiritual adviser and his daughter. In the U.S., meanwhile, 25,000 protesters gathered in New York in opposition to president-elect Donald Trump while 8,000 took to the streets in Los Angeles. American protesters held signs reading, “Not my president,” while South Koreans carried slogans including, “Who’s the real president?” On opposite sides of the globe, the sentiment was the same.

It’s been more than 1,560 days since Adam Capay, an Indigenous man awaiting trial for murder, was put in solitary confinement in a Thunder Bay prison, and he remains in isolation. It’s been three weeks since his case made national headlines. The Ontario government has announced some reforms in how segregated prisoners are treated, as well as an external review committee examining the use of segregation. Still, there have been no repercussions for those who knew (or should have known) of Capay’s ordeal and did nothing.