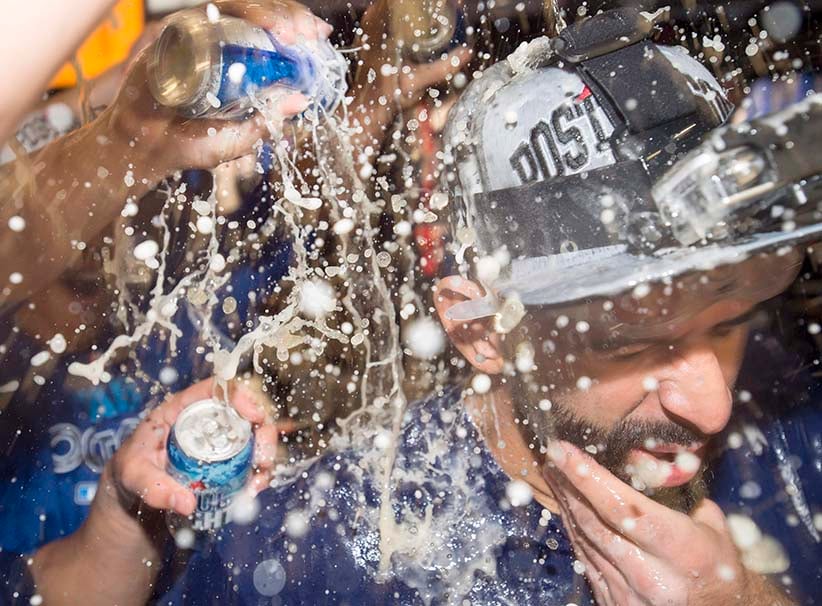 Toronto Blue Jays’ Jose Bautista gets soaked with beer as the team celebrates in the clubhouse after clinching a Wild Card spot in the playoffs following AL MLB action against the Tampa Bay Rays in Toronto on Saturday, Sept. 26, 2015. (Frank Gunn/CP)

When can Ontarians pick up beer from grocery stores?

Ontario plans to allow the sale of beer in a few dozen grocery stores by December, expanding to 450 outlets within three years. The long-awaited change was made possible by a new, 10-year agreement between Queen’s Park and Brewers Retail, a consortium of big, foreign-owned brewers that runs the province’s 447 Beer Stores, a near-monopoly. It’s certainly more convenient, but still unnecessarily restrictive. Grocery stores will only be able to sell beer at certain hours, at specified prices and in limited quantities. It’s a nice first step to a freer market, but how about really opening the taps?

Despite the frosty stares, U.S. President Barack Obama and Russian President Vladimir Putin held a “focused” 94-minute sit-down on the sidelines of the UN General Assembly, with Putin later suggesting he could work with the U.S. on the crisis in Syria. Of course, the two sides disagree sharply about the future of Syrian leader Bashar al-Assad, with Russia seeing him as a bulwark against Islamic State and the U.S. viewing him as a ruthless tyrant. But the mere fact that Putin and Obama met for 34 minutes longer than scheduled is reason to be optimistic. Those who truly have no common ground don’t usually have much to talk about.

With Martin Shkreli’s reversal, is the fight to keep drug prices low over?

Turing Pharmaceuticals CEO Martin Shkreli has pledged to backtrack on a decision to hike the price of Daraprim, a 60-year-old drug used to treat infections, to US$750 a pill from just US$13.50 after drawing the ire of, well, everyone. But the problem of soaring drug prices isn’t going away that easily. Alexion Pharmaceuticals, the U.S. maker of the “world’s most expensive drug,” a $700,000-per-year treatment for two rare blood disorders, is challenging Canada’s ability to regulate drug prices in federal court. If Alexion succeeds, we could all end up sicker and poorer.

Can skateboarding carve out a role at the Olympics?

Skateboarding is among the new events proposed for the 2020 Olympic Games in Tokyo. But while the addition of snowboarding has drawn a more youthful audience to the Winter Games, skateboarders seem characteristically blasé about the idea. “I think they need us more than we need them,” skateboarding legend Tony Hawk once told Larry King. Add to that skateboarding’s rebellious anti-hero subculture, and the Tokyo Games could be in for one awkward gold-medal round. 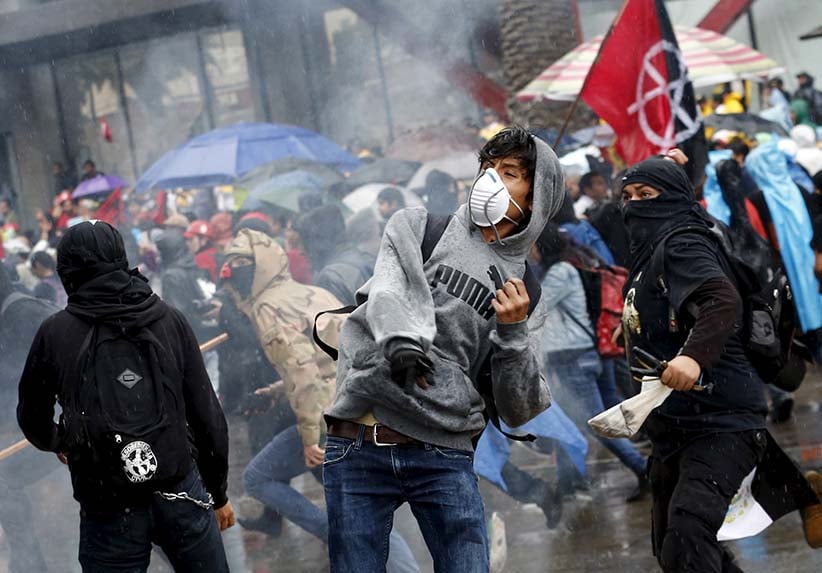 Demonstrators throw stones during clashes with riot police during a march to mark the first anniversary of the disappearance of the students from Ayotzinapa College Raul Isidro Burgos, in Mexico City, September 26, 2015. Tens of thousands marched in Mexico City on Saturday to demand answers on last year’s disappearances of 43 students, piling new pressure on President Enrique Pena Nieto to clear up a case that has battered his image. (Henry Romero/Reuters)

How are refugees dealing with colder climes?

Migrants arriving in Finland are having second thoughts. Calling the northern European country cold and boring, several displaced Iraqis have been spotted crossing back over the border into Sweden. “It’s too cold, there’s no tea, no restaurants, no bars, nobody on the streets, only cars,” one sniffed to the AFP news service. Not that every Finn was exactly rolling out the welcome mat. Demonstrators wearing white KKK-style robes threw stones and fireworks at a busload of migrants in Lahti, while a gasoline bomb was hurled in Kouvola.

Another change to airline rules?

Air Canada is pledging to be more musician-friendly. Passengers flying with instruments are to be given pre-boarding privileges (to secure overhead bin space) or the option to buy a second seat at half price (for oversized instruments, such as cellos). The new approach comes after several well-publicized dust-ups at the gate, as well as an earlier, seemingly arbitrary policy that banned violas from the cabin, but not violins. Now, if Air Canada could only do something to improve the carry-on experience for the rest of us.

Can the loonie get any lower?

The Canadian dollar hit its lowest level in 11 years this week at US74.5 cents—and there’s no sign of a reprieve any time soon. The culprit is a global commodities slump that’s dragged down Canada’s economy. The silver lining is supposed to be a competitive boost for manufacturers, but, aside from an uptick in sales in May through July, there’s scant evidence to show that Canada’s battered rust belt can make up the gap. Yet another downer: Retailers may soon raise prices on everything from foreign-made clothing to foodstuffs, further weighing down households’ already creaky balance sheets.

Is this for real—there’s water on Mars?

Scientists have long talked about the possibility of water on Mars, pointing to ancient river channels, polar ice caps and trace amounts of moisture in the soil. But now there’s evidence, based on data from the Mars Reconnaissance Orbiter, that briny water may actually flow down the hillsides of the red planet. Where it comes from—deep underground or collected from the thin atmosphere—and whether it shows signs of life remain unanswered questions. All the more reason to go there and find out.

Related: What do Canadian astronauts think of going to Mars?